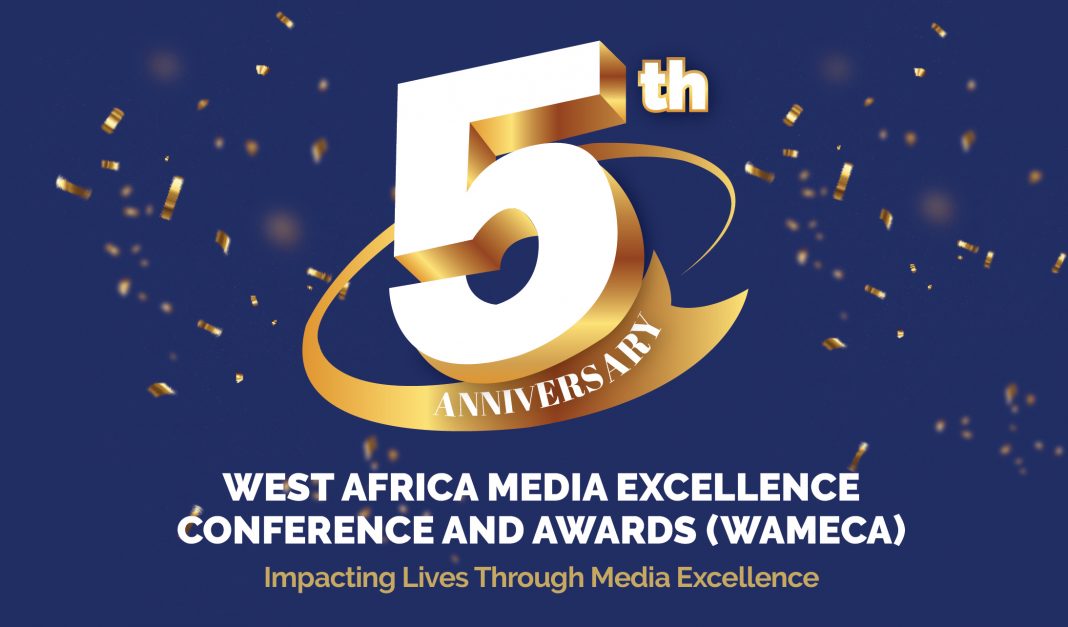 When West Africa’s biggest journalism event comes off on Friday, October 22, 2021, in Ghana, it would be a celebration of an impressive milestone – the five-year anniversary of the prestigious West Africa Media Excellence Conference and Awards (WAMECA).

For the last five years, it has been an annual pilgrimage for freedom of expression, media and governance advocates and experts to congregate and discuss pertinent issues and trends impacting journalism positively or otherwise and preferring concrete recommendations on how to strengthen the media landscape in the region to contribute effectively towards participatory, accountable, and peaceful democratic governance in Africa.

The region’s finest journalists in print, online and broadcast journalism who brave the odds as watchdogs to produce stories that significantly impact society also showcase stories that compete for awards, the ultimate being the West African Journalist of the Year.

The fifth anniversary goes beyond merely marking five years of existence as West Africa’s most prestigious media excellence event—it is also a celebration of the Media Foundation for West Africa (MFWA’s) commitment to participatory and accountable governance, freedom of expression and the desire to see a resilient media in the sub-region.

Back into memory lane

This year, guests and participants will share insights into the raging phenomenon of “Misinformation, Digital Media Regulation and Journalism in Africa”. This has been necessitated by the growing number of legislation in Africa that tend to strengthen state control over citizens’ use of the internet, online communication outlets and digital media platforms including social media platforms. West Africa’s foremost media defence lawyer, Femi Falana, will be the Special Guest. 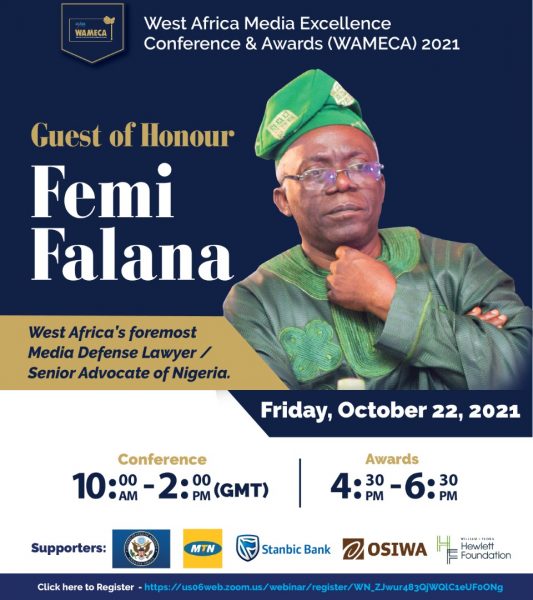 In 2020 when the COVID-19 pandemic turned the world on its head and distressing an already precarious media ecosystem on the continent, WAMECA focused deliberations on “The Future of Journalism”. The event hosted many prominent personalities including the Senior Editor, Africa TV and Media Management Executive of the British Broadcasting Corporation (BBC), Vera Kwakwofi and George Sarpong, Executive Secretary of Ghana’s National Media Commission and underscored the need for the media to engage in research and advocacy, adding that public education and robust interrogation should be the journalist’s role, especially during the COVID-19 pandemic. The event also hosted His Excellency Abdourahmane Diallo, UNESCO Country Representative in Ghana, as the Special Guest.

In the year prior (2019), WAMECA sought antidotes to the phenomenon of “Social Media, Fake News and Elections in Africa”. It was a healthy discourse ahead of 2020 when at least 25 countries on the continent were headed for the elections. The event hosted Chairpersons of the elections management bodies of Ghana and Burkina Faso, top state security officers in some countries in West Africa and a representative from social media giant, Facebook. The Guest of Honour, was Pansy Tlakula, Chairperson of the Information Regulator of South Africa and past Chair of the African Commission on Human and Peoples Rights. Others included Jean Mensah, Chairperson of the Electoral Commission of Ghana, Ahmed Newton Barry, Chairperson of the Electoral Commission of Burkina Faso and the Minister of Information, Kojo Oppong Nkrumah, Oyedapo Oyekunle “Dapo” Olorunyomi.

Further back in 2018, participants at WAMECA deliberated on “Media Development, Financing and Sustainability” necessitated by the fact that the industry was battling the combined effects of poor standards, repression of media freedoms, weak economies and absence of contextually relevant media management data, which had culminated in a serious challenge of sustainability for many media organisations in West Africa. His Excellency Dr Mohamed Ibn Chambas, the United Nations Special Representative of the Secretary-General for West Africa and the Sahel, and head of the UN Office in West Africa (UNOWAS) graced the occasion.

The most exciting perhaps of all was the maiden edition in 2017 which certainly set WAMECA off to a good start with a strong and bold showing by the MFWA. It focused on four key thematic areas including promoting safety of journalists and countering impunity for crimes against journalists and the media, democratic transitions and accountable Governance in West Africa. That also marked the 20th anniversary of the MFWA.

Entries, Winners and the Jury

Since its inception on October 28, 2017, WAMECA has received more than 3,500 entries from seasoned journalists across West Africa.  Out of this, 40 journalists have been awarded for producing compelling works which have had significant impact on society. Journalists who wear the WAMECA badge of honour are those who braved the odds in researching and publishing compelling stories to make the world a better place.

The most coveted Overall Journalist of the Year prize has been taken by investigative journalist Manasseh Azure Awuni winning it twice in 2018 and 2020 after Seth Kwame Boateng, grabbed the honour in the maiden edition. In 2019, Burkinabe journalist, Sama Tounwendsida Hugues Richard of Burkina Faso took the crown.

Over the years, the WAMECA Awards scheme has empaneled for its Jury some of the seasoned media experts and celebrated journalists across the continent including Kenya’s Joseph Warungu, Senegal’s Sophie Ly Sow and Tidianne Sy, Ghana’s Cameroun Duodu and Elizabeth Ohene, Nigeria’s Lanre Idowu, Liberia’s Rodney Sieh, Cote D’Ivoire’s Selay Kouassi and Reyhanna Masters from Zimbabwe.

Commenting on the achievements of WAMECA over the last five years, the Programme Manager of the Media and Good Governance programme at the MFWA, Mrs Abigail Larbi-Odei, was excited about the milestone chalked.

“We are indeed happy that WAMECA has become an anticipated platform to raise key and relevant voices to address the critical issues that confront media development, freedom of expression and good governance in the West Africa region,” Mrs Larbi-Odei said.

“We have remained resolute and resilient in the last five years and certainly look for better days in the coming years. As a media development organisation, the MFWA believes that media excellence is crucial for development and transforming lives. WAMECA will continue to inspire journalists in the region to produce stories that positively impact society,” she added.

The MFWA team is immensely grateful to organisations such as the US Embassy Ghana; MTN-Ghana; STANBIC Bank Ghana, US-based William and Flora Hewlett Foundation; Open Society Institute for West Africa (OSIWA); Facebook; Tullow Ghana; CBOD; Access Now; Deutche Welle Akadamie; GCB Bank and CIMA for their generous support and commitment towards promoting media excellence in West Africa through their support and sponsorship of the West Africa Media Excellence Conference and Awards and to the over 50 media partners across the region.