Working with our partner organisation in Liberia, the Center for Media Studies and Peace Building (CEMESP), the MFWA has implemented a number of freedom of expression and media development projects and activities in the country.

MFWA’s Projects and Activities in Liberia

Examples of some of the projects and activities undertaken in the country include: 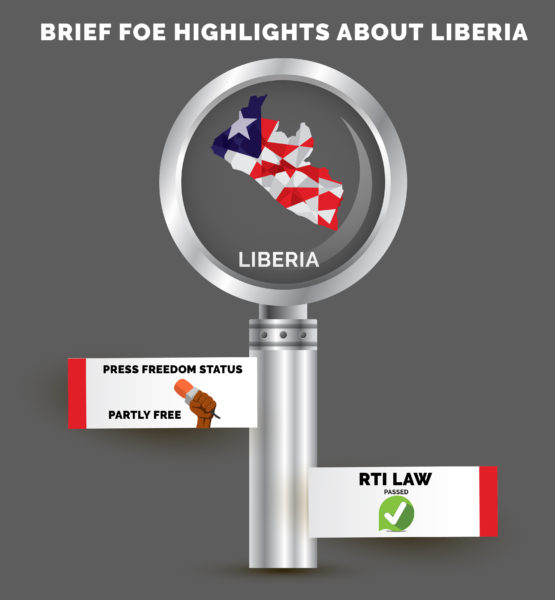 The Republic of Liberia is surrounded by Sierra Leone to the west, Guinea to the north and Côte d’Ivoire to its east. Liberia was a colony for about 17 years before partial independence was achieved through the declaration of a commonwealth on 4th April, 1839. Full independence was, however, declared eight years later on 26th July, 1847. Although founded by freed American and Caribbean slaves, Liberia is mostly inhabited by indigenous Africans, with the slaves’ descendants comprising 5% of the population. Richly endowed with water, mineral resources, forests, and a climate favorable to agriculture, Liberia is a producer and exporter of basic products, i.e. timber and rubber.

Liberia’s Constitution guarantees freedoms of speech and the press, and the government largely respects these rights. The country also has a right to information law.

Even though Liberia was one of the first to sign the Table Mountain Declaration which calls for the abolition of prison terms for speech offenses, the country’s media landscape has been plagued with a flurry of criminal libel and civil libel suits that often result in excessively prohibitive judgments. Journalists and media houses have been at the receiving end of crippling fines, closure or long custodial sentences for publishing information deemed uncomfortable. Aside the prohibitive judgment, the press freedom atmosphere in the country became more depressing in early of 2018 when President George Weah and some senior members of his government were reported to be physically and verbally attacking some journalists and media outlets.

Fortunately, libel was decriminalised on February 28, 2019, when the President signed into law a bill to amend sections 11:11, 11.12 and 11.14 of the criminal code which prescribed prison terms for a range of speech offenses. This was welcome news to the media fraternity in the country and in the region, especially, the MFWA and its partner organisation, CEMESP, which had urged the President to prioritise the passage of the bill that his predecessor had put before the legislature.

While the repeal of the repressive law is seen as a major relief to the media in the country, hefty compensations sought and imposed in civil cases persist and this often poses severe financial difficulties to journalists and their media outlets, a situation that encourages self-censorship in the media.

The legal framework of the media in the Republic of Liberia is governed by the following laws:

Article 15 of the Liberian Constitution