The MFWA has been carrying out freedom of expression (online and offline) and media rights monitoring, media capacity building, and media development interventions in Sierra Leone for close to two decades. MFWA’s work in Sierra Leone has contributed immensely to achieving the current improved conditions of press freedom and free expression.

Media Reform Coordinating Group (MRCG) is MFWA’s partner organisation in Sierra Leone. The group led a number of media reform initiatives in the country from 2013 to 2016. In collaboration with MRCG, the MFWA continues to monitor and report on media and freedom of expression rights violations in the country while working to strengthen the capacity of the media.

Ahead of the 2018 general elections in the country, the MFWA and partner, MRCG, implemented a rapid response intervention aimed at addressing media safety issues before, during and after the 2018 elections. The intervention specifically focused on building the capacity of journalists to report effectively on election-related issues and working effectively with police and security forces. It also involved an experience sharing session between the Ghana, Liberia and the Sierra Leonean Police on promoting the safety and security of journalists during the electioneering period. 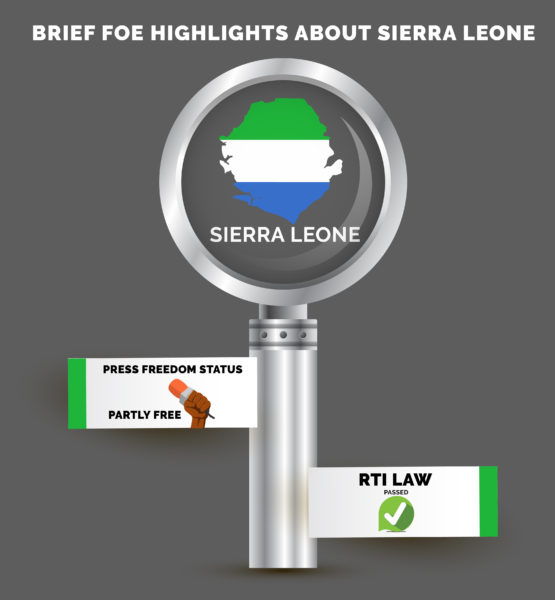 Sierra Leone attained independence on the 27th of April 1961. It is bordered by Guinea to the northeast, Liberia to the southeast, and the Atlantic Ocean to the southwestern part. The country has a tropical climate, with a diverse environment ranging from savannah to rainforests.

The country’s economy relies on mining diamonds and is a major producer of gold. Sierra Leone is also among the largest producers of titanium and bauxite in the world. English is the language of instruction in schools and the official language in government administration.

The media atmosphere in Sierra Leone is relatively stable as media houses are allowed to operate with little interference. The umbrella body for practicing journalists periodically runs training workshops for media practitioners, thus, improving professionalism in the media.

A number of frameworks regulate the media environment in Sierra Leone. Some a listed below.