The MFWA started work in Mali at a time when there was repression against the media and free expression. The organisation also worked with other partners to improve press freedom and human rights conditions in the country, especially after the coup d’état in 2013. Specifically, the MFWA worked with other partners to implement a Freedom of Expression and Safety of Journalists’ project in Mali in 2013 where periodic reports were produced and published on the general human rights, freedom of expression and media conditions in the country. MFWA’s work has contributed to the relatively improved conditions of press freedom and free expression in the country.

Working with its partner organisation in the country, Maison de la Presse du Mali, the MFWA continues to monitor and report on press freedom and freedom of expression (online and offline) conditions in the country. MFWA’s Future engagements in Mali will focus on media development for participatory and accountable governance; and internet/digital rights advocacy to enhance online freedom and democratic consolidation. 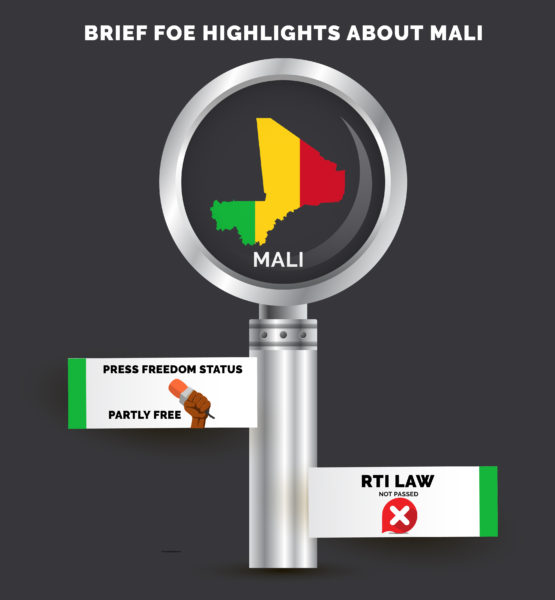 Mali gained independence from France on September 22, 1960. For several decades after gaining independence from France in 1960, Mali suffered several coup d’état and 23 years of military dictatorship until democratic elections in 1992. After the first multiparty, democratic presidential election were held peacefully in 1992, the relative political and social stability in country gave rise to rapid economic growth.

However, the once peaceful and media-friendly country was hit by a political crisis in early 2012. The crisis significantly impacted human rights and press freedom conditions in the country.

In Mali, the Higher Council for communication (CSC), the National Committee on Equal access to the Sate-owner Media (CNEAME) formed on January 6, 1993, and the Media Ethics Observatory (ODEP) regulate media activities.

The Higher Council for Communication was formed on the recommendation of a national conference which followed the fall of the Second Republic. It is responsible for the public’s right to information. The CSC which was established on December 24, 1992 is made up of 9 members.

The legal framework of the media in the country is governed by the following laws:

Media and Terrorism in Mali: How Can Journalists Adapt?

In line with our advocacy mission aimed at creating an environment conducive for the practice of journalism, the …

In addition to terrorist threats, the countries of the Sahel (Burkina Faso, Mauritania, Mali and Niger) face enormous …

In an apparent move to calm tensions in the country, the Malian authorities have released leaders and organisers …