The MFWA has been carrying out press freedom and freedom of expression rights monitoring and reporting in Niger since 1997. The organisation has also undertaken a number of media development interventions in the country.

The Observatoire Nigérien Indépendant des Médias pour l’Ethique et la Déontologie (ONIMED) is the partner organisation of the MFWA in Niger. ONIMED is a professional, self-regulating, non-profit organisation whose work focuses on ensuring that journalists observe the code of ethics generally accepted by the profession and/or codified into the Professional Journalists’ Charter of Niger.

The MFWA will continue to work with ONIMED to promote freedom of the press and of expression in Niger. The two organisations will also work to improve media professionalism so the media can make meaningful contributions towards consolidating democratisation processes in the country. 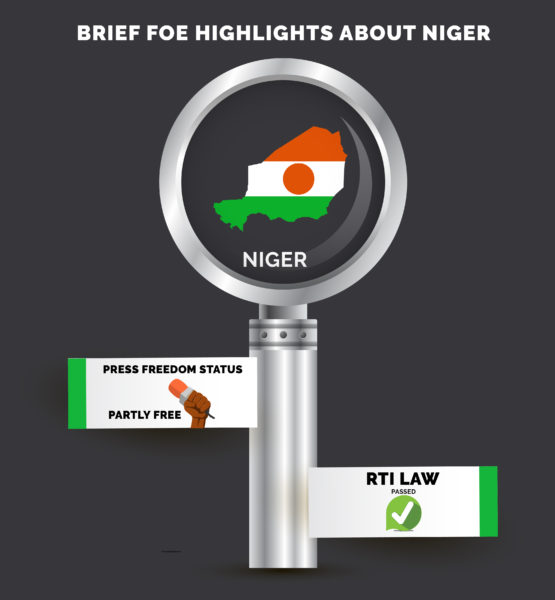 Niger gained independence from France in 1960 and experienced single-party and military rule until 1991, when General Ali Saibou was compelled by public pressure to make way for multi-party elections in 1993. Niger is a landlocked country with some of the world’s largest uranium deposits which serve as a backbone for the economy. Niger is bounded by Mali, Chad, Nigeria and Benin.

In 2009, government interference with the country’s media regulator and an upsurge in intimidation of journalists through the law courts led to the deterioration of press freedom in the country. In 2010, after President Mamadou Tandja was ousted, a post-coup transitional government decriminalised media offenses and replaced prison sentences with fines as punishments for offenses such as defamation and publication of false information. The transitional government also approved the Charter on Access to Public Information and Administrative Documents to help improve transparency and the public’s access to information.

The general press freedom environment in the country saw further improvement after President Mahamoudou Issoufou was elected into office in 2011. The President, Mahamoudou Issoufou, signed the Declaration of Table Mountain, an initiative that calls for the repeal of criminal defamation and insult laws and for a press environment in Africa that is free from government, political, and economic control.

Despite the improvements, journalists in the country are often attacked, arbitrarily arrested and detained, and equipment confiscated for covering protests and other controversial issues. The landscape is also challenged with restrictive press licensing legislations and heavy taxation of private media outlets, a situation that hinders the development of private media in the country.

The state-run media regulatory body, the High Council on Communication (CSC), regulates the media in the country. The CSC issues all licenses and press credentials, and forms the Council of the Press: a journalism accrediting body. The CSC is also the only body legally allowed to close media outlets in the country.

The National Communication Observatory (ONC) also regulates the media in Niger. The MFWA’s partner organisation in Niger, ONIMED, also focuses on self-regulation in the industry by monitoring broadcasts and publications.

The following legal provisions govern the media landscape in Niger: