The MFWA has been monitoring and reporting on the press freedom and freedom of expression environment in Mauritania for close to two decades. In addition to Alerts that are often issued when a violation or any other development occurs in the country, the MFWA works with its partner organisation in the country to petition authorities, including the President, to take steps to redress the issue.

The MFWA’s partner organisation in Mauritania is Regroupement de la Presse Mauritanienne (RPM). RPM is an association of media professionals that seeks to promote and expand freedom of expression, media pluralism and professionalism in the country.

The MFWA will continue to work with RPM to promote freedom of expression and build the capacity of the media to contribute to consolidating democratisation processes in the country. 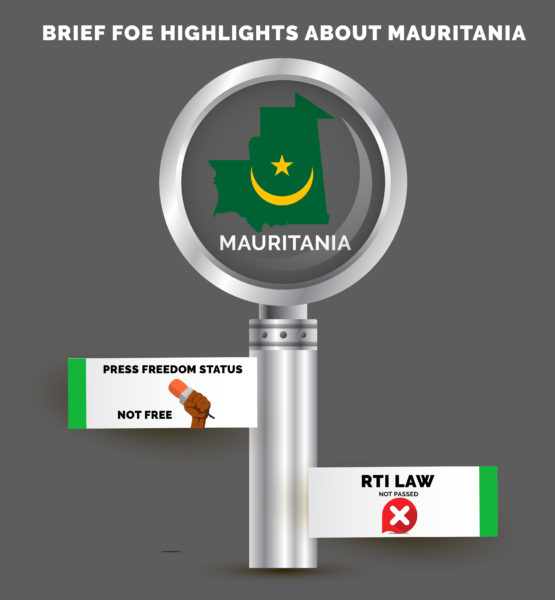 The Islamic Republic of Mauritania is a West African country with an Arab-Berber population to the north and black Africans to the south. Nouakchott is its capital. Mauritania gained independence from France in 1960. However, after independence, the country suffered a number of military coups, the last of which happened in August 2008. Since 2009, the country has been going to the polls to elect their president.

Mauritania has a number of state-owned and privately owned newspapers, television and radio stations. Media pluralism in the country has, however, not been accompanied with the requisite freedoms. Imprisonment of journalists, human rights activists and trade unionist are quite common in the country.

Individuals are also harassed when they express views that are critical of government. In October 2017, for instance, Abdellahi Ould Mohamed Ould El Haimer was sacked from his job at the National Rural Water Agency after writing a Facebook post critical of the Prime Minister.

As a result of the relatively unfriendly press freedom and freedom of expression environment, many journalists apply some degree of self-censorship when covering potentially contentious issues such as corruption, slavery and other sensitive topics.

The High Authority for the Press and Audiovisual Sector (HAPA) is the media regulatory body in Mauritania. Created as part of legal and regulatory reforms in 2006, the HAPA is responsible for nominating the heads of public media outlets and the Mauritanian News Agency.

In addition to the Regroupement de la Presse Mauritanienne (RPM), MFWA’s partner, there are other media groups such as the Mauritanian Journalists’ Union and the National Union of Electronic Sites in Mauritania. These media groups work to promote the protection and respect of the rights of journalists (those operating offline and online), their welfare and professionalism as a whole.

The right to freedom of opinion, thought, and expression is guaranteed by Article 10 of the 1991 Mauritanian constitution. Through some legal and regulatory reforms enacted in 2006, the requirement for newspapers to seek prior approval from government before publication was eliminated. The reforms also established journalists’ legal right to protect sources.  In 2011, Mauritania’s Parliament approved amendments to the 2006 Press Freedom Law that abolished prison sentences for slander and defamation, including for speech about Heads of State.

In practice, however, these reforms have not translated into expanding the frontiers of expression for the media and ordinary citizens in the country.

In December 2015, the National Assembly passed a new cybercrime law with prison sentences and heavy fines for disseminating certain types of politically sensitive content over the internet. Journalists in the country have largely described the law as permitting authorities to prosecute them for almost anything published online.