The Gambia is one of the countries that have received a lot of attention from the MFWA, especially during the 22-year dictatorship of former President Yahya Jammeh when respect and protection of press freedom and free expression was at its lowest. The MFWA’s work in the country has largely contributed to the improved media landscape in the country.

Specifically, the MFWA has been monitoring and reporting on press freedom and freedom of expression violations in the country since its setup.

The organisation has also litigated two separate cases of free expression rights violations against the Gambian government at the ECOWAS Community Court of Justice. The litigations were on behalf of two Gambian journalists – Chief Ebrima Manneh, who remain disappeared since 2006, and Musa Saidykhan, who was tortured by Gambian security personnel and had to flee the country for his safety.

The ECOWAS Court delivered judgments in favour of the two victims in 2008 and 2010 respectively, but the Yahya Jammeh government refused to comply with both judgments until it was elected out. The MFWA pursued its advocacy and engaged the new government led by President Adama Barrow.

In June 2018, the new Gambian government paid 50% of the compensations to the families of Ebrimah Manneh and Deyda Hydara, a former editor of The Point newspaper who was also killed in December 2004. The compensation for Musa Saidykhan is being worked out between the government and the journalist.

The MFWA has also worked with its partner organisation, the Gambia Press Union (GPU), to develop a Comprehensive Strategic Framework for a long-term Media Sector Reform and Development in The Gambia.

The MFWA will continue to work with its partner, the GPU, to monitor and report on all press freedom and free expression developments in the country. The two organisations will also work with other stakeholders to ensure that the Strategic Framework is implemented so the media can be strengthened to support the democratic consolidation of the country. 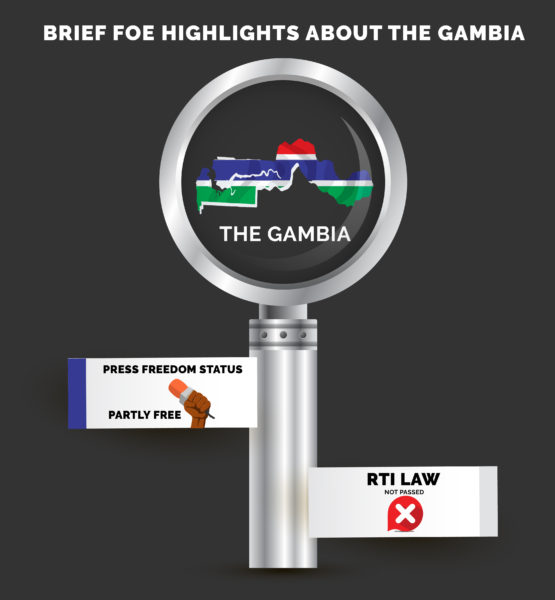 Gambia gained its independence from the United Kingdom on February 18, 1965. It is the smallest country on mainland Africa. Its capital town is Banjul and English is the official language. The country’s economy is dominated by farming, fishing and tourism.

The Gambia is one of several African countries where press freedom and free expression were suppressed by government for years. Journalists, bloggers and other human rights defenders suffered severe restrictions under Yahya Jammeh’s regime. Under his rule, The Gambia was seen as one of the worse countries in West Africa for the practice of journalism and activism – lots of journalists, media workers and dissidents were arrested, tortured and/or imprisoned.

Following a successful transfer of power to the current government, led by President Adama Barrow, the media landscape has seen some significant improvements. Notable among them is the ruling by the country’s Supreme Court declaring as unconstitutional the law on False Publication on the Internet, among other repressive pieces of legislation, namely defamation and aspects of Sedition. The ruling ordered the government of The Gambia to repeal the offensive laws. The ruling followed civil suit filed by the MFWA’s national partner organisation, Gambia Press Union (GPU).

The court also ruled that sections 178, 179 and 180 of the Gambian Criminal Code, which penalises libel and defamation, are “inconsistent with the constitutional guarantee of free speech and freedom of the press and other media,” adding that the restrictions, “absent all the necessary safeguards to protect the exercise of those rights and freedoms, are unnecessary in a democratic society.”

The former National Intelligence Agency (NIA) that was used to terrorise journalists and other critics has been given a new mandate and rebranded as State Intelligence Services. Some of the former NIA officials have also been arrested for their roles in past human rights abuses.

Despite the improved press freedom and freedom of expression conditions in the country, the media are still faced with high licensing fees high for newspapers and radio stations. The media are also faced with high operational costs due to prohibitive taxes.

The Gambia Press Union, MFWA’s partner organisation in The Gambia, remains one of the most influential stakeholders in Gambia’s media landscape.

The main regulatory framework of the media is the National Information and Communication Infrastructure (NICI) law passed in 2004. Also still in force is a law passed in 2002, creating a commission with the power to issue licenses and sanction offending journalists. Libel remains a criminal offence. In 2004, legislation was passed allowing for the cancellation of all print and broadcasting licenses, forcing media groups to re-register at five times the original cost.

The Media and COVID-19 in West Africa: The Case of Gambia

When Adama Barrow was inaugurated as president of The Gambia on February 18, 2017, it signalled a new …

Read More from The Gambia
Media and Good Governance