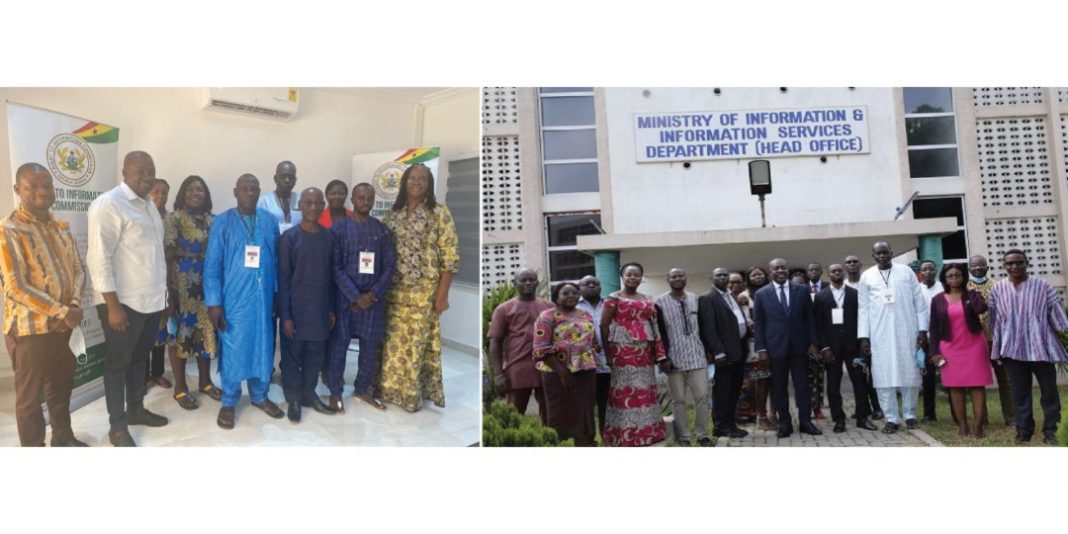 The Media Foundation for West Africa (MFWA) has facilitated a tour for senior officials from the Information Services Department (ISD) of the Republic of Gambia to learn and share experiences on press freedom and access to information in Ghana.

The four-man team was in Ghana from December 13-17, 2021 for engagements with the MFWA and other key actors in Ghana’s media and access to information space. Led by Deputy Director of the Service, Ebrima Njie, the team was received at the offices of the MFWA by the Executive Director, Sulemana Braimah, and board member, Professor Kwame Karikari. at the start of their five-day tour. The engagement focused on the press freedom environment in Ghana and the country’s experience so far with the implementation of the Right to Information (RTI) law passed in 2019.

Following the fall of the 22-year autocratic regime of Yahyah Jammeh, the new authorities in The Gambia are seeking to lay strong institutional foundations for a democratic rebound.  The MFWA and its national partner organisation, Gambia Press Union (GPU) have over the past five years engaged extensively with the new government led by President Adama Barrow and other stakeholders to introduce legal reforms that have greatly improved The Gambia’s media and freedom of expression environment. Press freedom violations, very rampant under the 22- year autocracy of Yahyah Jammeh, have considerably reduced. The country has adopted an Access to Information law and partially decriminalised libel through a Supreme Court decision.

It is within the framework of the country’s efforts to sustain the reforms momentum that the senior officials from the Gambia’s ISD came to Ghana to engage with various relevant organisations and individuals on democracy, press freedom and access to information. Ghana also adopted a Right to Information law recently and is considered among of the best examples in the sub-region in terms of press freedom. The Gambian Information Services Department (ISD) is in charge of ensuring the establishment of the implementation framework for the Access to Information Law in their country.

A senior programme officer at the MFWA, Muheeb Saeed, led the Gambian delegation to the offices of the National Media Commission for their second engagement. The Gambian officials were received by the Executive Secretary of the media regulator, George Sarpong, who briefed them about the legal framework regulating the media space in Ghana. He underlined the unique mode of nominating members of the Commission and the selection of the Chairperson by his peers, adding that the arrangement assures the complete independence of the Commission in carrying out its regulatory duties.  The next port of call was the International Press Centre, where they met executives of the Ghana Journalists Association, led by its acting President, Roland Affail Monney.

On the third day of the tour, the delegation went to the state-owned Ghana Broadcasting Corporation (GBC). Management of the organisation was led by the Director-General, Professor Amin Alhassan, who explained how the organisation is run. He explained that the head of GBC is appointed by the independent National Media Commission and is insulated from executive interference. Professor Alhassan told the Gambians that GBC operates as a public service broadcaster, catering to the needs and interests of all segments of the public. He said the RTI law has not yet been fully tested, but expressed confidence in the commitment of the RTI Commission to ensure a smooth implementation and greater accountability from public institutions.

On the fourth day, the delegation from The Gambia was at the Ministry of Information as guests of their Ghanaian counterparts, the Information Services Department (ISD) Ghana. They were received by the Minister, Kojo Oppong-Nkrumah, the Chief Director of the Ministry, Mrs Mamle Andrews, the Ag. Chief Information Officer of ISD, David Owusu-Amoah. Others were the Head of the Access to Information Division, Dr Winnifred Nafisa Mahama and Mrs Ethel Amissah-Cudjoe, Head of Public Relations Coordination Division. The Minister said over the past five years, ISD Ghana has been transformed in terms of its structure, operations and equipment, and expressed Ghana’s readiness to accompany The Gambia in its quest to reinforce its ISD.

The Ag. Chief Information Officer of ISD Ghana, David Owusu-Amoah, briefed the Gambian guests about the structure and functions of ISD Ghana and the two Institutions discussed how they could collaborate to improve access to information and advance good governance in their respective countries. The guests were later taken on a tour of the various departments and installations within ISD Ghana.

The delegation ended the fourth day of their tour at the offices of A- Partners @ Law, where they engaged with the head of the law firm, Samson Lardy Anyenini, one of the leading figures in the campaign leading to the passage of Ghana’s RTI Law and an authority on the law. Samson outlined the major features of Ghana’s RTI law, the work of the RTI Commission and his experience as counsel for some institutions which have gone to court or appealed to the Commission after being denied their RTI requests. He advised the Gambians to prescribe reasonable amounts as fees for information requests in order to prevent information holders from charging arbitrary and dissuasive fees.

The delegation rounded off their tour of Ghana with a visit to the office of the RTI Commission on the fifth and final day, accompanied by the MFWA’s Administrative Manager, Daisy Prempeh. They were received by the Executive Director of the RTI Commission, Yaw Sarpong Boateng, who explained the work of his outfit to the guests. Mr Boateng assured the delegation of the RTI Commission’s willingness to share experience and collaborate with the Gambia to create an enduring culture of openness and transparency in public administration through an effective implementation of the RTI laws. Mr Boateng advised against allowing public institutions to turn the RTI fees into avenues for generating funds internally.

The leader of the Gambian and Deputy Director of the Gambian ISD, Ebrima Njie, noted that although the Gambia was now fully democratic, the hangover from the autocracy of the past could still be felt in the reserved attitude of public officers and their willingness to disclose information.

The delegation left Ghana on December 20, 2021, after paying a courtesy call on the Executive Director of the MFWA to thank his organization for hosting them and facilitating their tour. They expressed satisfaction with the outcome of their engagements in Ghana adding that the tour will greatly enhance their work in overseeing the setting up of the structures for an effective implementation of The Gambia’s Access to Information Law.