Over the years, the MFWA has been monitoring and reporting on press freedom and freedom of expression violations and other developments in Guinea. The organisation has also been pursing redress for attacked journalists. Currently, the organisation’s work in the country is done in collaboration with its partner organisation, l’Association Guinéenne des éditeurs de la Presse Indépendante (AGEPI).

Future projects and activities in Guinea will focus on improving the safety of journalists situation in the country by strengthening relations between the media and security agencies, especially the police. The MFWA will also work with its partner, AGEPI, to promote internet freedom in the country while monitoring and reporting on press freedom and freedom of expression (online and offline) developments. 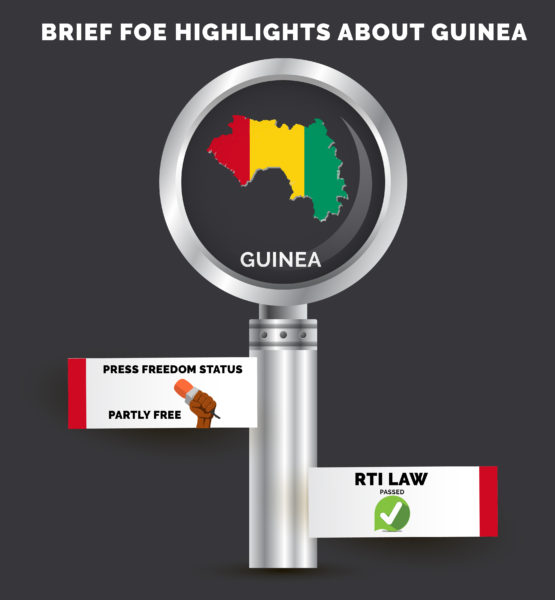 Guinea gained independence from France on October 2, 1958. From 2000 to 2010, the country experienced political instability as a result of incursions by rebels and seizure of power by the military. The country returned to civilian rule in 2010. In 2014, the country was hit by an outbreak of Ebola which claimed many lives. Bauxite is one of the country’s major exports. Guinea also exports banana, peanuts, coffee, pineapple and palm oil.

Overview of the Media and FOE Environment

Restrictive media laws, government interference, intimidation, physical violence and inadequate funding contribute to a difficult media environment in Guinea. Violence against journalists became more prevalent in 2009 and 2010 during the transition to democracy. Several journalists fled the country and some private media also suspended operations temporarily for fear of recriminations.

The country’s record of press freedom and freedom of expression violations remains relatively high. From 2014 to 2018 for instance, Guinea’s record of violations came third only after Nigeria and Ghana. Journalists are often subjected to physical attacks, arrests, suspension by the media regulator and intimidation by political party affiliates.

In spite of the harsh press freedom and freedom of expression environment, the country recorded one of the most significant court rulings that punished a state security agent who abused a journalist. On November 12, 2014, the Kaloum County Court in Guinea sentenced Staff Sergeant Abdoulaye Diallo to eight months in prison, for assaulting radio journalist, David Tchopn Bangoura, during a peaceful march in September that year. In addition to imprisonment, the security officer was fined an amount of 10 million Guinean Francs (about US$1,400), and barred from carrying weapons for five years. The Higher Authority of Communication (HAC) was created as the regulatory body for the sector to replace the National Communication Council. The Authority also seeks to provide much stronger representation of the media’s interest.

Press freedom is guaranteed by the 2010 constitution of Guinea, but attacks against journalists and media houses persist. In 2016, the country adopted a new criminal code which retained penalties of up to five years in prison for defamation or insult of public figures. Also in 2016, a cyber security law was passed which also criminalizes similar offenses online, in addition to disseminating false information or information that is protected on national security grounds, or information that could potentially disturb law and order, public security or jeopardise human dignity.