As part of the press freedom and freedom of expression work in Togo, the MFWA has been issuing Alerts on online and offline violations against journalists, media outlets and members of the public, especially, protestors. The organisation has also worked with local actors, including its former country partner, to petition the government on specific freedom of expression and assembly violations.

As part of efforts aimed at promoting the safety of journalists and media workers while reducing clashes between the media and state security agencies, the MFWA and its partner organisation held a one-day Police-Media Dialogue to improve working relations between the two parties.

L’Union des Journalistes Indépendants du Togo (UJIT) is the MFWA’s current partner organisation in Togo. UJIT is a self-regulatory media organisation that seeks to promote excellence and high ethical standards in journalism practice. The organisation also strives for cohesion and solidarity in the media sector.

Going forward, the MFWA will continue to work with UJIT to monitor the press freedom and freedom of expression situation in the country – both online and offline. We will also focus on strengthening the capacity of the media to support and promote participatory and responsible governance to contribute to consolidating the democratic processes of Togo. 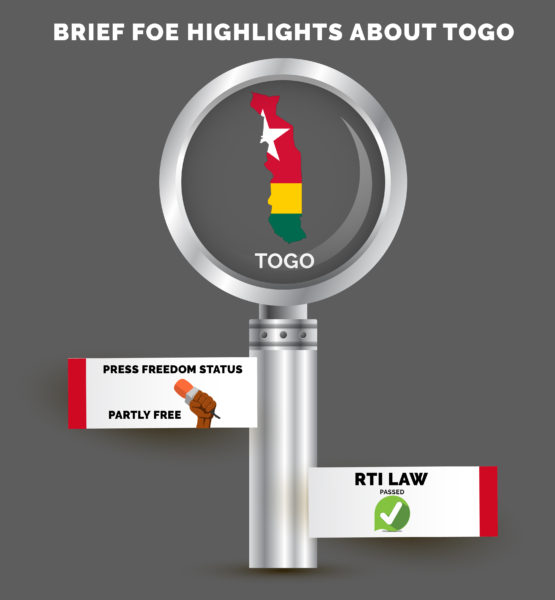 Togo is one of the smallest countries in West Africa. Lomé is the capital of the country. Togo gained independence from France in 1960. In 1967, Gnassingbé Eyadéma succeeded in a military coup and became president till his death in 2005. His son, Faure Gnassingbe, was elected president in 2005 to take over from him. Togo is one of the world’s top five producers of phosphates, but largely dependent on foreign aid.

There has been a gradual opening of Togo’s media landscape over the years. In the April 2015 presidential elections, for instance, independent media in the country reported on events with relatively greater freedom than in previous years. Also, all political candidates, including those of the opposition, had equal access to airtime on the public broadcasters.

Togo’s media landscape is, however, challenged with continued violations against press and freedom of expression rights, brutal attacks against protestors, including student demonstrators, and high levels of impunity.

In 2015, the country recorded its first incident of a journalist serving prison time for a post on social media. There have since been separate attacks against freedom of expression and access to information online, including the blocking of social media during opposition demonstrations.

The High Authority of Broadcasting and Communications (HAAC) is the media regulatory body in Togo. In 2009, the power of the HAAC was augmented to enable it impose penalties and sanctions. The HAAC is, thus, able to suspend publications or broadcasts of a media outlet for up to six months or confiscate press cards.

There is also a self-regulatory body called the Togolese Media Observatory. Other media groups and associations include MFWA’s partner, UJIT, the National Council of Press Patrons (CONAPP) and Journalists for Human Rights.

Article 25 of Togo’s 1992 (rev. 2007) Constitution guarantees the right to “freedom of thought, of conscience, of religion, of belief, of opinion and of expression.”

Despite efforts by journalist associations and the media in Togo to protest the new code, the government has refused to budge claiming that the provisions are necessary to fight cybercrime, money laundering, and terrorism.

The National Assembly, again in 2018, adopted a new cyber security law. The law criminalises publication of false information and breaches of public morality, as well as other vague and problematic provisions that could be used against online freedom of expression. Under this law, the police are given greater power to conduct electronic surveillance.