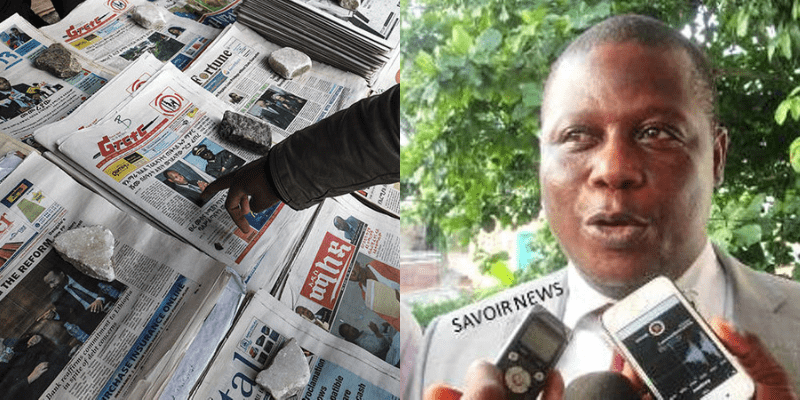 The High Authority for Audiovisual and Communication (HAAC), the institution in charge of media regulation in Togo, has requested the courts to withdraw the operating license of the weekly, L’Independent Express, whose director of publications was arrested over an article the regulator judges to be defamatory of members of government.

The request made on January 4, 2021, followed an article entitled “End of year scoop: Women Ministers Arrested for Theft of Golden Spoons”, published in the edition 545 of December 29, 2020 of the newspaper which reported that some women ministers had stolen golden spoons during an official reception.

In the night of December 30, 2020, the Central Research and Criminal Investigations Service (SCRIC) of the gendarmerie arrested director of publication of the newspaper, Carlos Komlanvi Kétohou, in front of his family. The journalist says the security agents questioned him about the article and his sources. They also seized his phone and coerced him to reveal the passwords to his social media and email accounts.

Released on January 2, Ketouhou was summoned the same day and interrogated by the HAAC in the presence of Isidore Sassou Akollor, the President of the Patronat de la Presse Togolaise (PPT), an association of media owners.

“This article constitutes a serious violation of the rules of professional conduct and ethics of the journalist profession,” the HAAC said in a statement released on January 4. “During the hearing, the Director of publication of the weekly L’Indépendant Express could not provide any proof of the assertions contained in this article, in particular the date and the precise place of the incidents mentioned.”

The HAAC revealed in the press release that it had requested the courts to withdraw the operating license of the newspaper in line with paragraph 2 of article 63 of the Press and Communication Code in Togo, relative to the deliberate refusal to respect professionalism and ethics.

The decision of the HAAC has been greeted with shock by the media fraternity and civil society, with the Patronat de la Presse Togolaise (PPT) rejecting the move as “too extreme.”

The Togolese Dany Ayidah, who is Resident Director of the National Democratic Institute (NDI) in the Democratic Republic of Congo and member of the Togo-based group, Commitment for a Peaceful Future, observed that “the Togolese media is also likely to disappear, or have all its prerogatives withdrawn. There will always be self-censorship. People will be afraid to publish disturbing articles, people will not be able to dig into disturbing cases, and ultimately, since judges tend to protect the strongest, it is the rule of law that will suffer.”

Meanwhile, Ketohou is summoned to appear before the presiding judge of a Magistrate’s Court in Lome at 9:00 am on January 11, in connection with the HAAC’s suit against the newspaper.

The Media Foundation for West Africa is concerned about the arrest and detention of Ketohou for an alleged press offense which, under Togolese law, is liable to civil and not criminal proceedings. We would have expected the HAAC to mediate between the newspaper and whoever claims to have been defamed by the publication under reference. Having failed to do so, but rather chosen to constitute itself into the complainant, the HAAC is abandoning its responsibility of using mediation to protect the media against legal suits.

We are calling on the HAAC to redraw the summon. We also call on the authority in Togo to allow Carlos Ketohou and L’Independent Express to operate without any harassment.