The MFWA started work in Côte d’Ivoire at a time when there was repression against the media and free expression. The MFWA’s work in the country has, thus, contributed immensely to achieving the current improved conditions of press freedom and free expression.

L’Observatoire de la Liberté de la Presse, l’Ethique et de la Déontologie (OLPED) is Media Foundation’s partner organisation in Côte d’Ivoire. It is a self-regulatory media organisation in Côte d’Ivoire that promotes and defends the ethics and code of conduct of journalists. Since the partnership in 2014, the MFWA has been working collaboratively with OLPED in all country-level engagements and advocacy.

Some of the projects and activities undertaken in Côte d’Ivoire by the MFWA on both press freedom and media development include:

Some of the specific activities undertaken in the country include monitoring and reporting of online and offline freedom of expression violations and advocacy for redress; engagements with government and other critical stakeholders on safety of journalists and media rights issues; capacity building workshops and a number of publications including “The Media and the Political Crisis in Côte d’Ivoire”  “The Law and the Media in Côte d’Ivoire.” 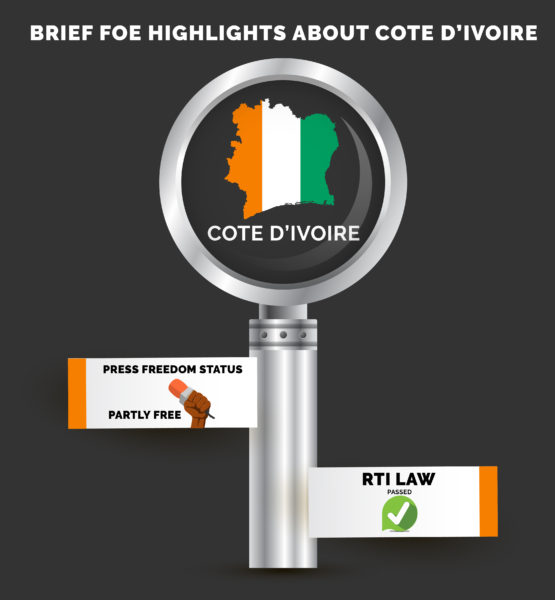 Ivory Coast gained independence from France on August 7, 1960. It shares boundaries with Liberia, Guinea, Mali, Burkina Faso and Ghana. After more than a decade of economic crisis due to a civil war, Côte d’Ivoire is ranked among the 25 poorest countries in the world and democratically one of the unstable countries in West Africa. It relies heavily on agriculture

Overview of Media and FOE Environment

Though the constitution provides for free expression and a free press, the government imposes significant restrictions on print and electronic media, especially on the state-owned media in Côte d’Ivoire. Free expression and media freedom however continue to witness improvement despite records of suppression and violations of media rights by ruling governments.

Côte d’Ivoire, like any other country with oppressed media, is experiencing major challenges such as lack of professionalism, weak managerial capacity, weak training institutions and low logistical capacity.

Over the years, the opposition political groups have always complained about governmental manoeuvres intended to prevent them from expressing their dissenting views through the state media.

The legal framework of the media in Côte d’Ivoire is governed by the following laws: