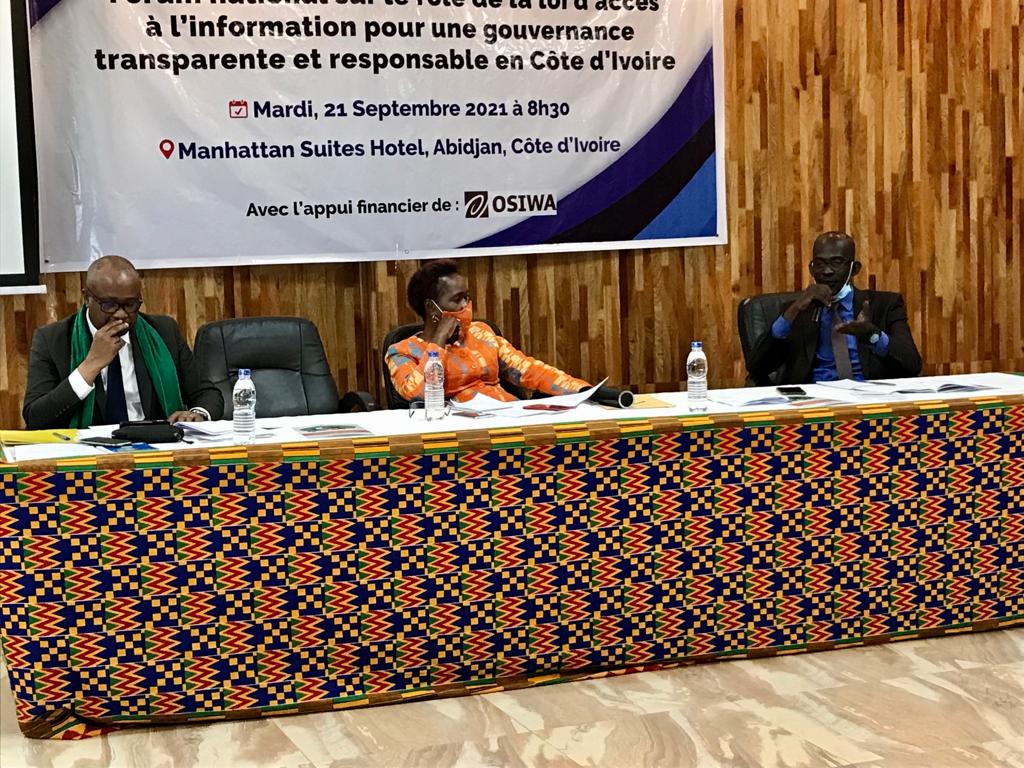 The forum, held on 21 September 2021 at the Manhattan Suites Hotel in Abidjan, sought to examine the law to establish if it adequately meets the objectives of promoting transparent and responsive governance as envisaged by the authorities in Côte d’Ivoire.

The meeting was organised with funding support from the Open Society Initiative for West Africa (OSIWA), a Dakar-based organisation that works to promote democracy, good governance and broad citizen participation in the governance process.

The law on access to information in Côte d’Ivoire, N°2013-867, was adopted on 23 December 2013. The adoption of this law was followed in 2015 by the establishment of the Commission d’accès à l’information d’intérêt public et aux documents publics (CAIDP), the institution responsible for its effective implementation. The CAID is supposed to ensure that journalists, civil society or ordinary citizens can access the information they need from public administrations and some private organisations to ensure the effective management of public resources.

In his address, Mr. Muheeb Saeed, Programme Officer at MFWA, noted that good governance is about transparency and accountability to citizens. However, journalists still find it difficult to obtain information from reliable sources in order to fulfil their duty of informing the public and demanding accountability from public authorities, who, moreover, have a reflex to withhold information about the way they carry out their responsibilities. “This culture of secrecy often leads to speculation and the dissemination of false information. It is therefore in the common interest of the authorities, journalists and the public that transparency is promoted in public administration,” Mr Saeed noted.

According to Dr Bamba Souleymane of the Commission for access to public information and documents (CAIDP), the Access to Information Act (ATI) has brought about a change in the sense that any person requesting information from a public or private administration can now appeal to the CAIDP. The latter has the possibility to enforce compliance by the organisation in question in case of refusal or non-cooperation.

The representative of the Minister for Communication, Media and Francophonie, Agnès Kraidy, stressed that the President of the Republic, Alassane Ouattara, with the establishment of a ministry in charge of the fight against corruption, is “taking a clear stand” with regard to the management of public affairs.

The chairman of the OLPED steering committee, Zio Moussa, said that the advent of this law is a big step forward, but that much remains to be done. In this regard, he urged all stakeholders to take inspiration from the Access to Information law of Sierra Leone which is “one of the best laws”.

“We have to make sure that we use this law that exists, not only us journalists but also as civil society and as ordinary citizens. We need to use it, understand how it works, its content, spirit and letter so that we can make proposals to improve it further,” he added.

The participants ended the meeting by calling on

The Abidjan forum was the third in the year after those in Accra and Niamey. The meeting was followed by a two-day residential training workshop held in Grand Bassam. Fifteen journalists benefited from the training which was facilitated by Dr. Selay Marius Kouassi, a media trainer and consultant and lawyer Dogbemin Kone.

The participants were trained on the ATI law and how it could be used to develop compelling stories and give credibility to news reports.