The MFWA has been promoting press freedom, freedom of expression, and media development in Nigeria for close to two decades. The organisation’s press freedom and freedom of expression work has over the years expanded to cover internet freedom promotion. The MFWA, thus, works with local and international actors in Nigeria to promote an open and secure internet that is accessible and affordable to all.

The organisation’s work in Nigeria has also focused on media capacity building and media development interventions. Activities undertaken in this area have contributed to strengthening the capacity of the media to play their watchdog roles in the governance processes of the country.

Some of the specific activities undertaken in the country include monitoring and reporting of online and offline freedom of expression violations and advocacy for redress; direct engagements with government and other critical stakeholders in the media and internet ecosystem; national forums and dialogues on freedom of expression and internet freedom related issues. Capacity building workshops have also been carried out under a number of projects, including the rapid response intervention that was undertaken ahead of the 2019 general elections.

In Nigeria, the MFWA works with its national partner organisation, the International Press Centre (IPC), and other actors such as the Nigerian Union of Journalists (NUJ) and Paradigm Initiative (PIN) in the promotion of media and freedom of expression rights (online and offline) and media development. 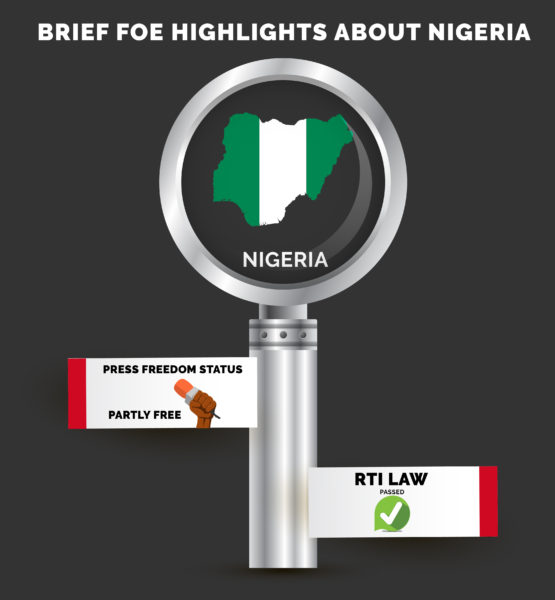 The Federal Republic of Nigeria comprises 36 States with Abuja as its capital. It is the most populous country on the African continent. On 1 October 1960, Nigeria gained independence from the United Kingdom. The country shares borders with the Republic of Benin in the west, Chad and Cameroon in the east, Lake Chad in the northeast, and Niger in the north. At its south, its coastline lies on the Gulf of Guinea.

As one of the world’s largest producers of oil, Nigeria exports oil and natural gas. In recent times, the country has had to continue its offensive against Boko Haram, a militant group that has threatened the security of the media and the country at large.

There are State radio and TV at both the federal and regional levels. Each of the 36 States runs at least one radio network and a TV station. International broadcasters such as the BBC, VOA and RFI remain major sources of news in the country. However, rebroadcasts of foreign radios are banned. Nigeria’s vibrant and active media landscape continues to face numerous attempts by state and non-state officials to suppress political criticism and intimidate journalists into silence. Attacks against journalists are quite prevalent in the country. Records from MFWA’s Freedom of Expression Monitor published from 2014 to 2018, for example, show that the country has consistently recorded the highest incidents of press freedom and freedom of expression violations across West Africa. The situation is compounded by gross impunity that accompany the violations. In addition, journalists are often denied access to information by government officials and the police.

The internet has become a very important medium in Nigeria. More than half of the Nigerian population are active online, including some notable social media influencers. Unfortunately, apart from the introduction of the 2015 cyber-crime law that has already been described as having repressive provisions for online expression, the government continues to seek ways of restricting internet freedom. For instance, in 2016, the government introduced the Frivolous Petitions Bill that had repressive provisions for expression online. After a vehement pushback from national and international organisations, the Bill was withdrawn. In 2018, some state officials hinted of the government’s intention to regulate social media. Fortunately, there hasn’t been much development on the latter yet.

On the other hand, when both houses of the National Assembly passed the Digital Rights and Freedom Bill in March 2018, President Muhammadu Buhari refused to assent to it with the reason that it “covers too many technical subjects and fails to address any of them extensively.” The Bill was a civil-society-led initiative that was meant to expand freedom of expression online in the country by regulating government’s surveillance of online activities and making internet shutdowns illegal, among other progressive provisions.

In 2011 President Goodluck Jonathan signed the Freedom of Information (FOI): which guarantees citizens’ right to public information. The legislation was the result of a decade-long advocacy campaign led by civil society groups and media practitioners. Until the passage of the law, access to official information remained restricted by provisions in the 1962 Official Secrets Act and the criminal code, which had various press and speech offenses, including sedition, criminal defamation, and publication of false news.

The National Broadcasting Commission (NBC) Act as amended by the Act No. 55 of 1999 confers undue powers on individuals owners of media outlets and offers no provisions to ensure the independence of the National Broadcasting Commission. The NBC Act recognizes public, private and state-owned radio and television stations. It does not provide for true public service and community broadcasting.