The MFWA was birthed in Ghana in March 1997. Since then, the organisation has been operating from Accra, the capital. The MFWA’s work in Ghana has focused on press freedom and freedom of expression and media development.

The media development work of the organisation has also contributed to strengthening the capacity of the media to be effective agents for participatory and accountable governance, particularly at the local governance level.

MFWA’s Projects and Activities in Ghana

Specific projects and activities undertaken by the MFWA on press freedom and freedom of expression issues in Ghana include:

Specific activities in many of these projects have been monitoring and reporting of online and offline freedom of expression violations and advocacy for redress; direct engagements with government and other critical stakeholders in the media and internet ecosystem; national forums and dialogues on freedom of expression and internet freedom related issues. Capacity building workshops have also been carried out under a number of the projects. The projects have also resulted in a number of publications including policy briefs and periodic FOE reports.

Some of the specific projects and activities undertaken to develop and strengthen the media to deliver on their mandate include:

Some of the specific activities undertaken under the projects include capacity building workshops for journalists and media institutions, production of policy briefs, town hall meetings to facilitate citizens-authorities, institutionalised radio programmes on local governance and state of the district broadcasts, and development of communication strategies for some local assemblies to facilitate proactive information disclosure.

The MFWA has been actively involved in advocacy for the passage of the Right to Information Law which was assented to by President Akufo-Addo on May 21, 2019. The organisation, through its own initiatives and activities of the Ghana Coalition on Right to Information, is already advocating for proper implementation of the law. 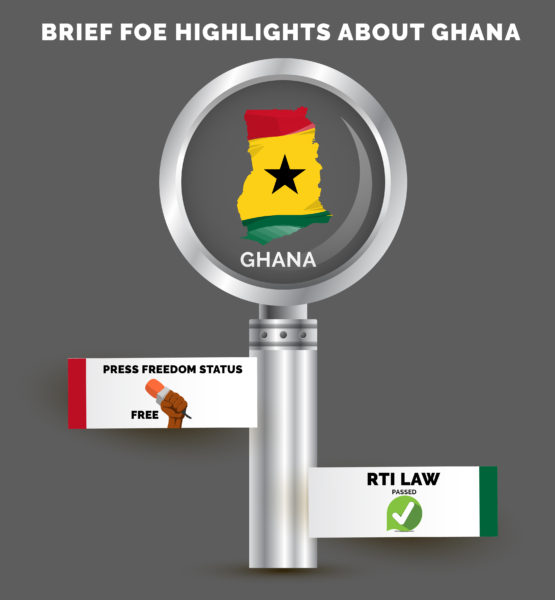 The country has so far hosted to two editions of the West Africa Media Conference and Awards (WAMECA), an initiative of the MFWA to reward and inspire journalism excellence in West Africa.

The Republic of Ghana gained its independence from Britain on March 6, 1957. It is bordered by Burkina Faso to the north, Côte d’Ivoire to the west and Togo to the east and extends south to the Gulf of Guinea.

Overview of the Media and FOE Environment

Despite a turbulent post-independence political history characterised by several military coups, Ghana has since 1993 been among Africa’s most stable democratic countries. Chapter 12 of Ghana’s 1992 Constitution guarantees freedom and independence of the media. Article 162 (3) of the Constitution states:

This constitutional stipulation reflects the situation on the ground as Ghana has one of the freest media environments in the world.

Ghana has a vibrant, pluralistic and free media environment with an independent statutory media regulatory body, the National Media Commission. There are, however, serious challenges with professional standards and partisanship. Internet and mobile telephone penetration has been very significant resulting in the creation of several online media and wider access to mobile telephony services.

In spite of a Constitutional provision in Article 21 which recognises the importance of free expression that includes exchange of ideas and interaction as well as respect for diverse opinion, and the repeal of the Criminal Libel Law in 2001, Section 208 of the country’s Criminal Code (1960) contains provisions that are inimical to free expression. Specifically, the following provisions under Section 208, which have been applied recently by security forces to intimidate or harass journalists, can be highlighted:

There are two main media regulatory institutions in Ghana – the National Media Commission (NMC), which deals mainly with media content, and the National Communications Authority (NCA) which is mainly responsible for frequency allocation, regulation and infrastructural development.

The NMC was established in 1993 in accordance with Articles 166 to 173 of the 1992 Constitution, with oversight responsibility over the media to promote and safeguard the freedom and independence of the media, encourage responsible practice and investigate, mediate and settle complaints made against the media. The NMC is made up of 18 members drawn from a broad spectrum of media and other professional stakeholder groupings, to ensure neutrality and insulate it against governmental control.

The National Communications Authority (NCA), on the other hand, was established by an Act of Parliament (Act 524) on December 30, 1996, to promote broadcast pluralism, to oversee the allocation, administration and utilisation of the country’s frequency spectrum and ensure that communications services are provided throughout Ghana. Accordingly, the NCA allocates frequencies and grants licenses for the operation of radio, television, telephone and other telecommunication services in the country.