Photo Story: Forum on declaration of assets by public office holders and the fight against corruption

The forum brought together anti-corruption campaigners, legal experts, CSOs, public/state institutions such as CHRAJ, Audit Service, Parliament, Attorney-General’s Department, political parties and the media, to deliberate on the current state of Ghana’s Asset Declaration Law and what needs to be improved.

Below are the number of photos that capture the key highlights of the forum. 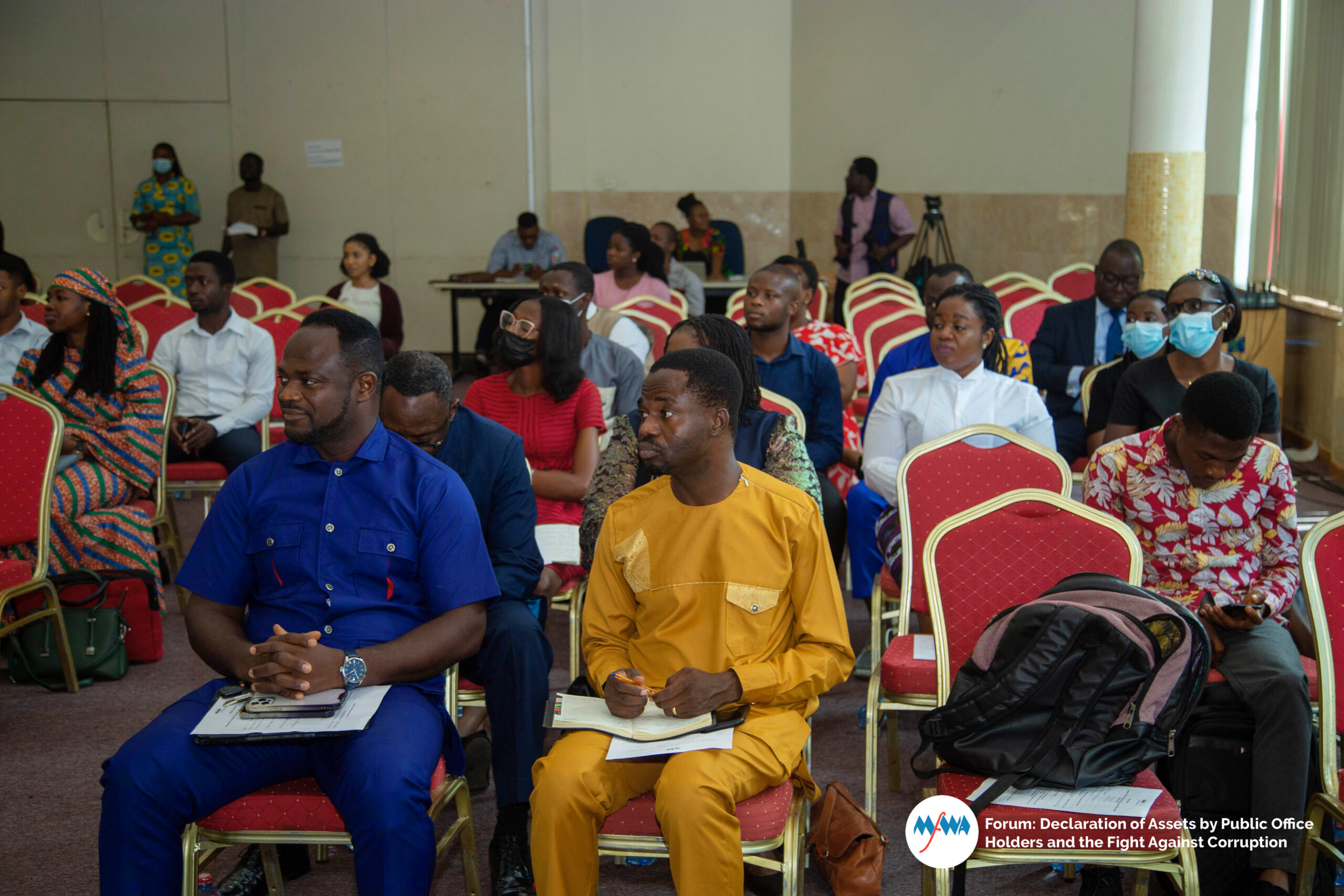 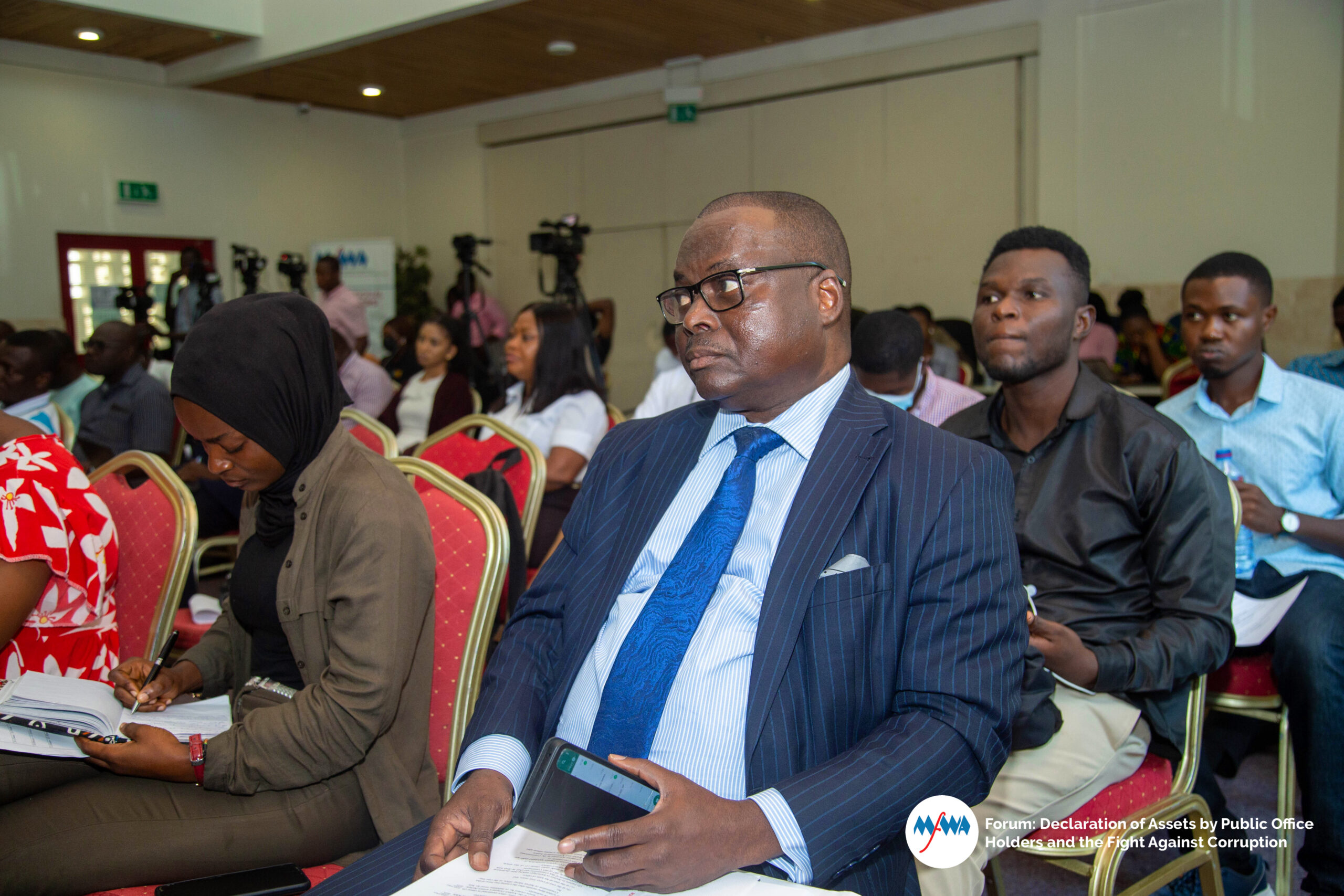 Cross-section of participants at the forum 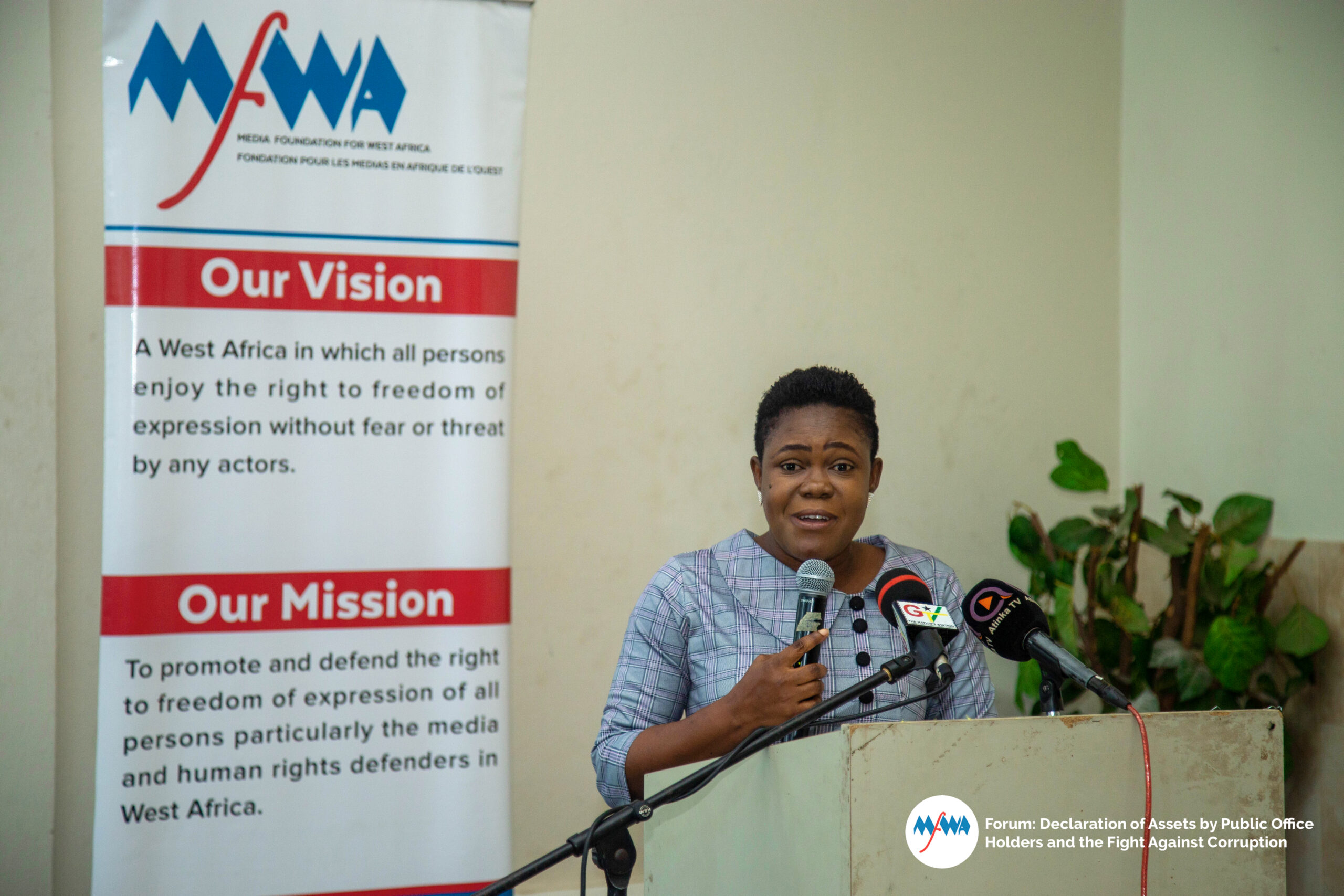 Abigail Larbi Odei, Manager of the Media and Good Governance Programme at the MFWA welcomed participants and explained the reasons for the organization of the forum in a welcome address. 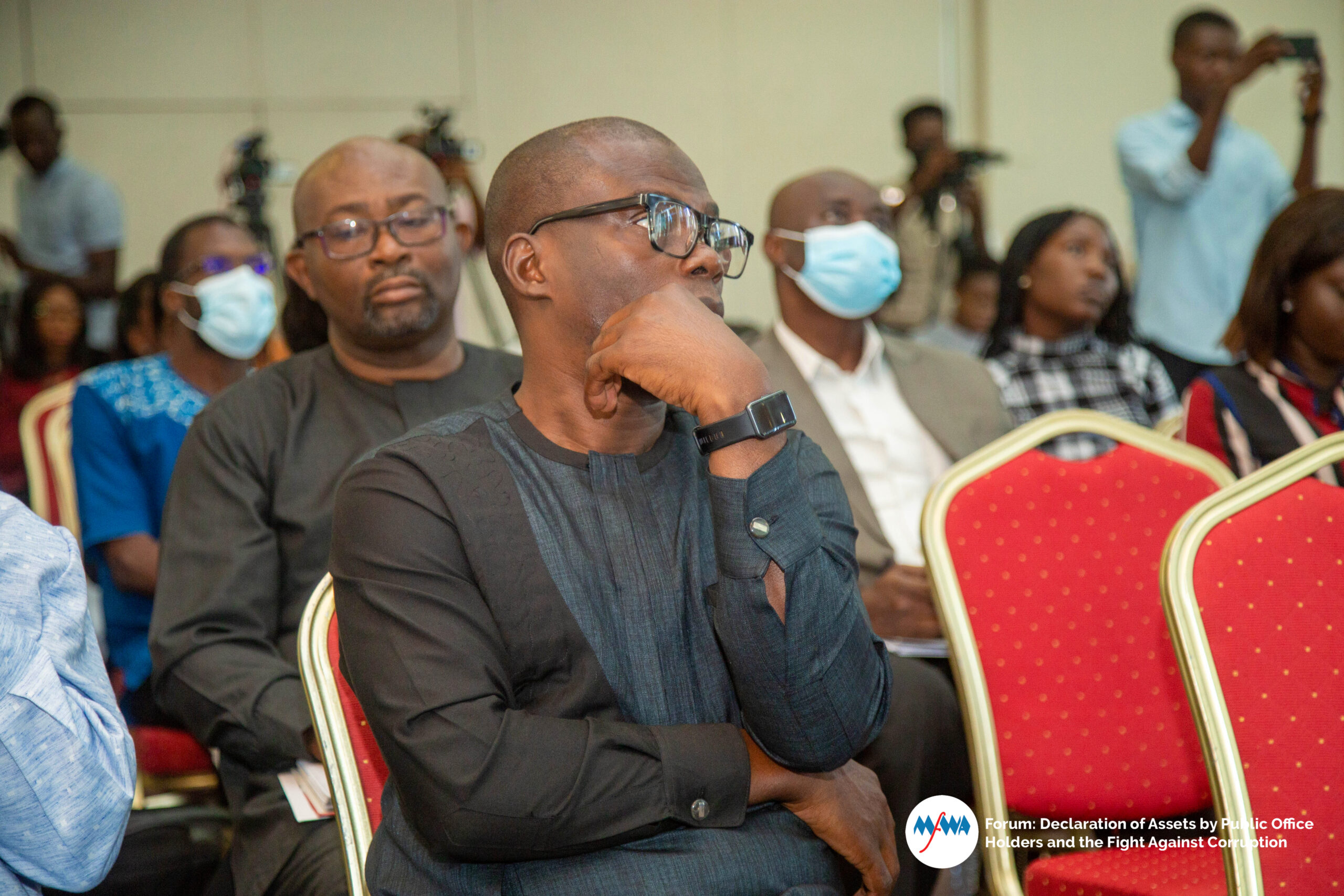 Sulemana Braimah, Executive Director of the Media Foundation for West Africa, sat among the audience 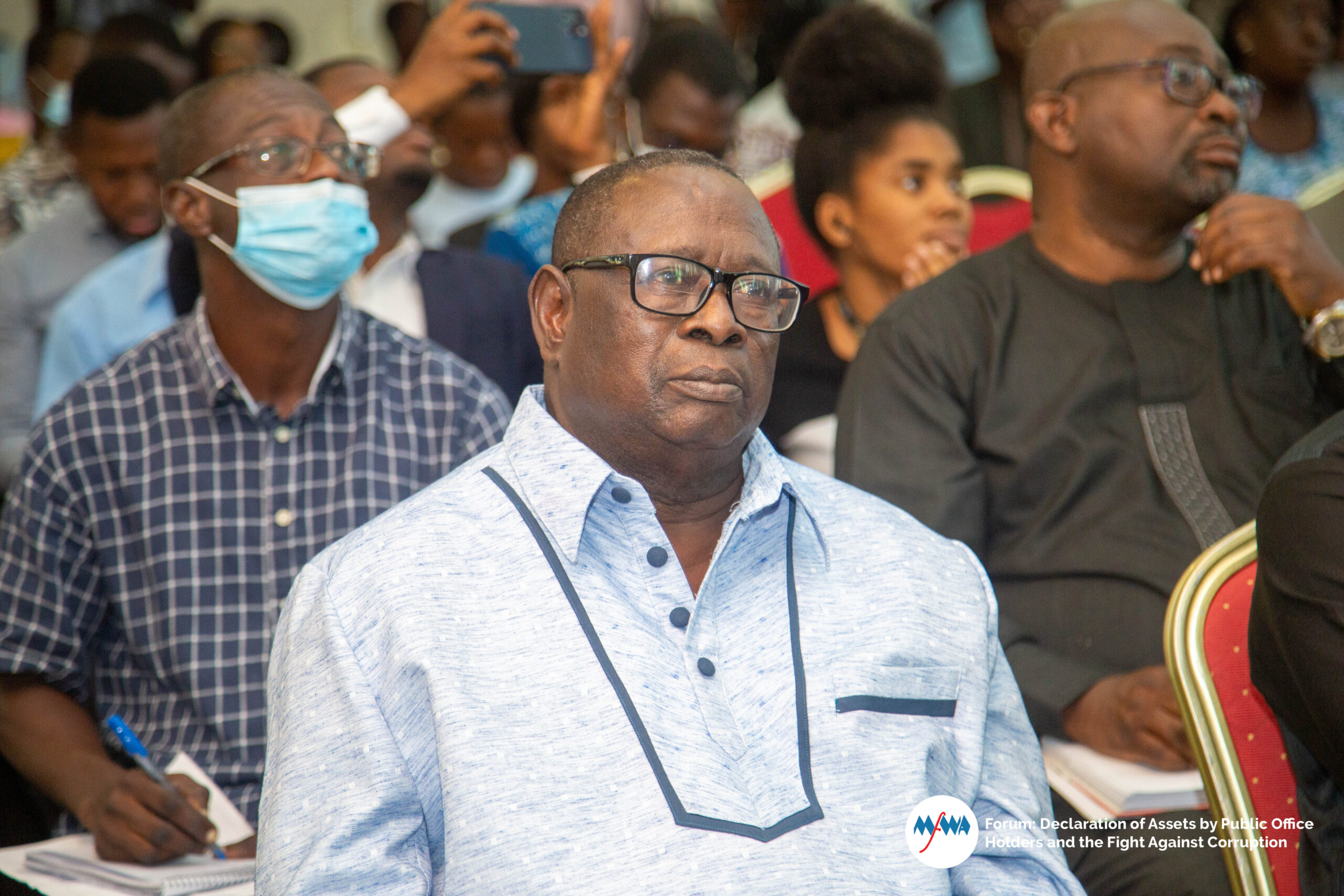 Cletus Avoka, member of parliament for Zebilla Constituency in the Upper East region was present at the event. Mr Avoka is a former interior minister and holds the record of having run for office in all elections since Ghana’s Fourth Republic. 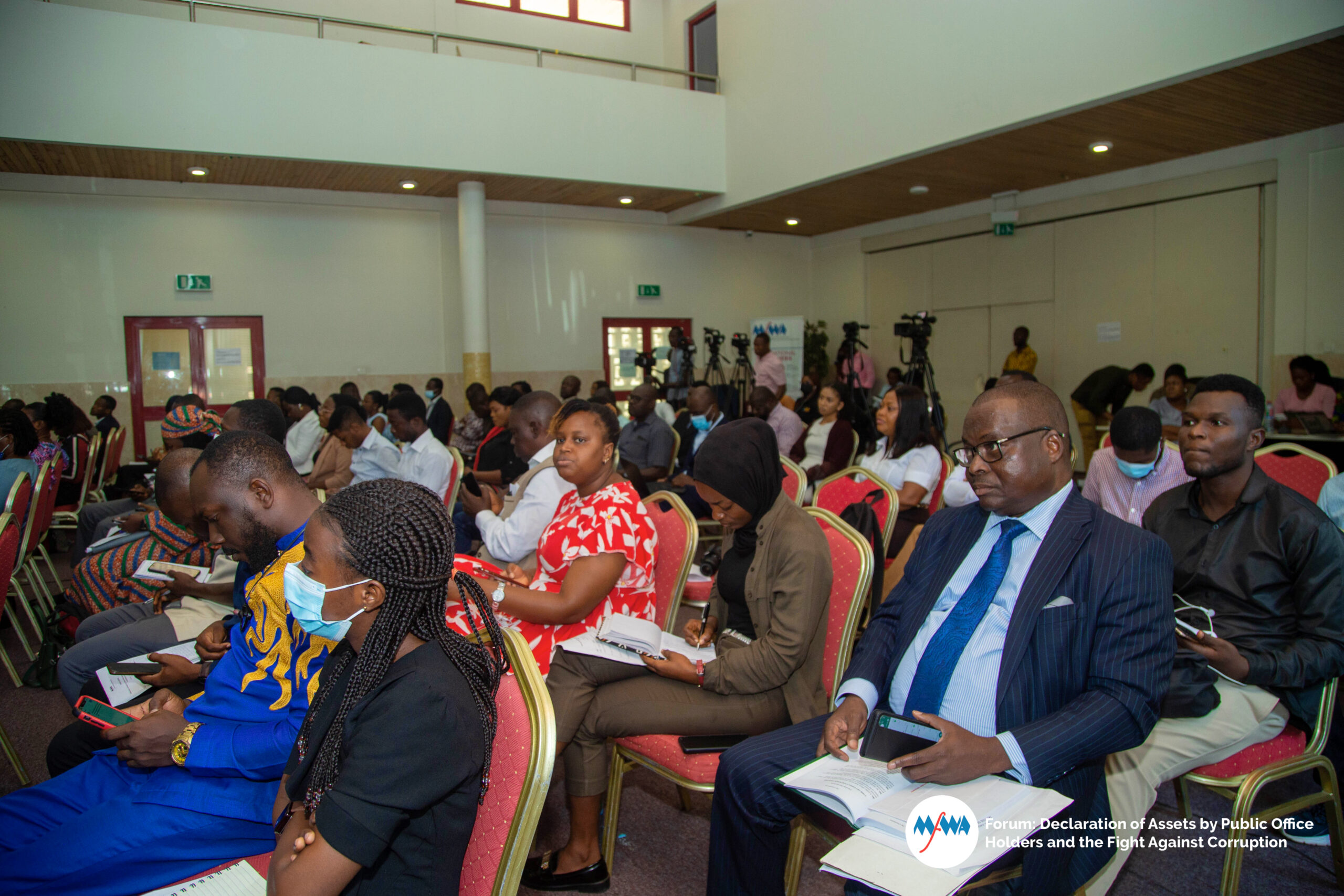 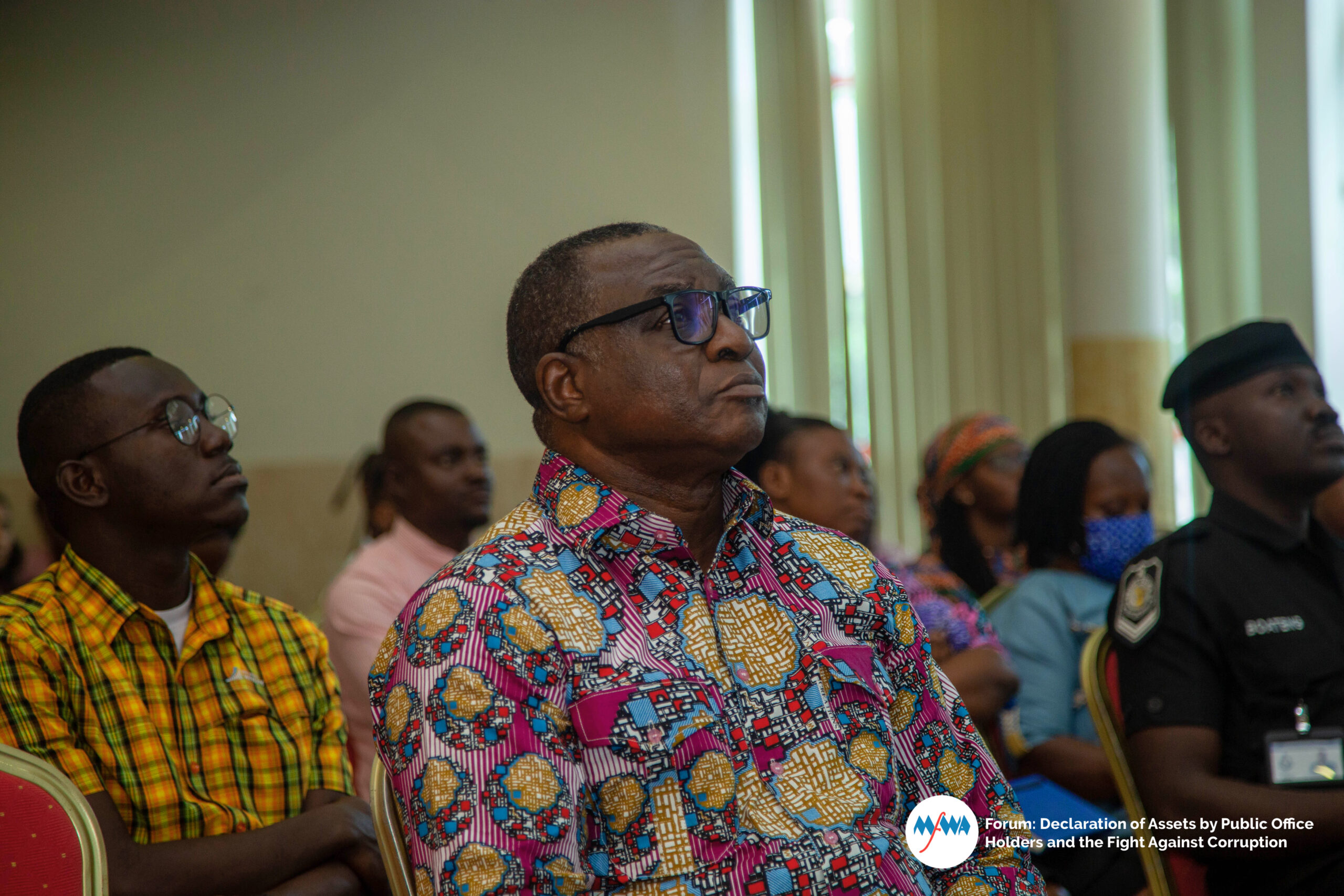 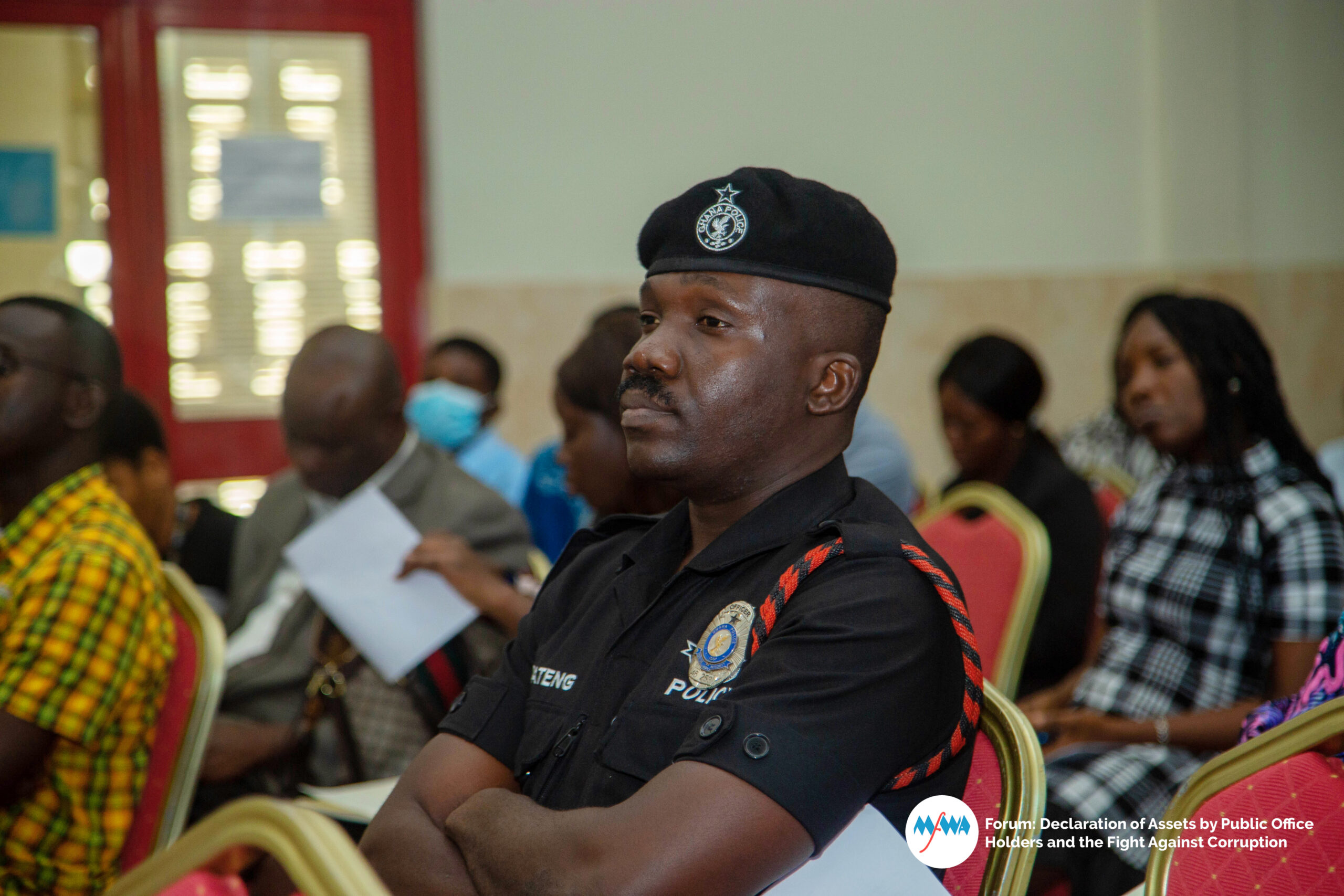 A rep from the Ghana Police Service 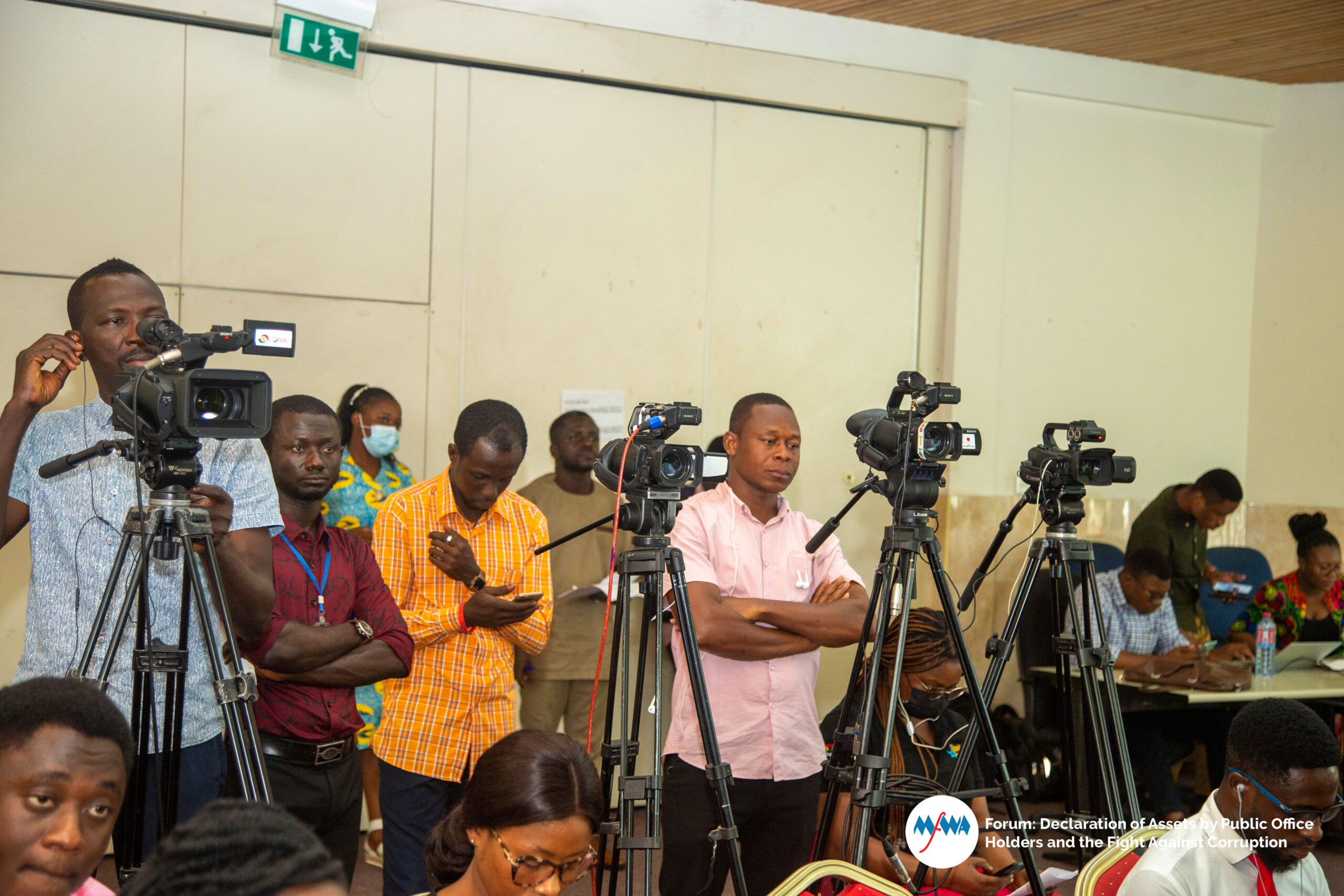 The media was present to cover the Forum 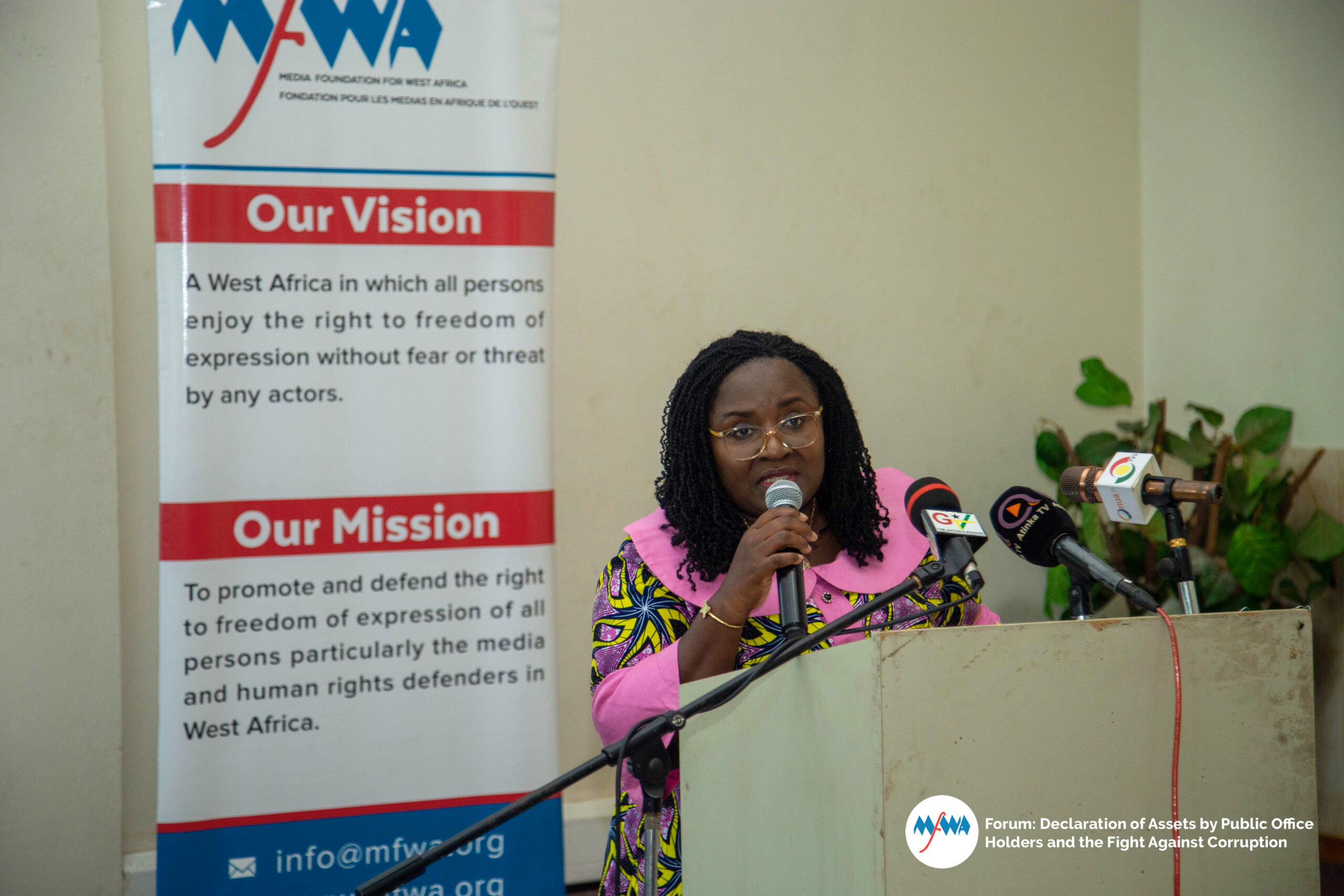 Giving the opening remarks, the Chairperson of the forum, Mrs Linda Ofori-Kwafo, emphasized the importance of an effective asset declaration regime as a tool against corruption and unexplained wealth. 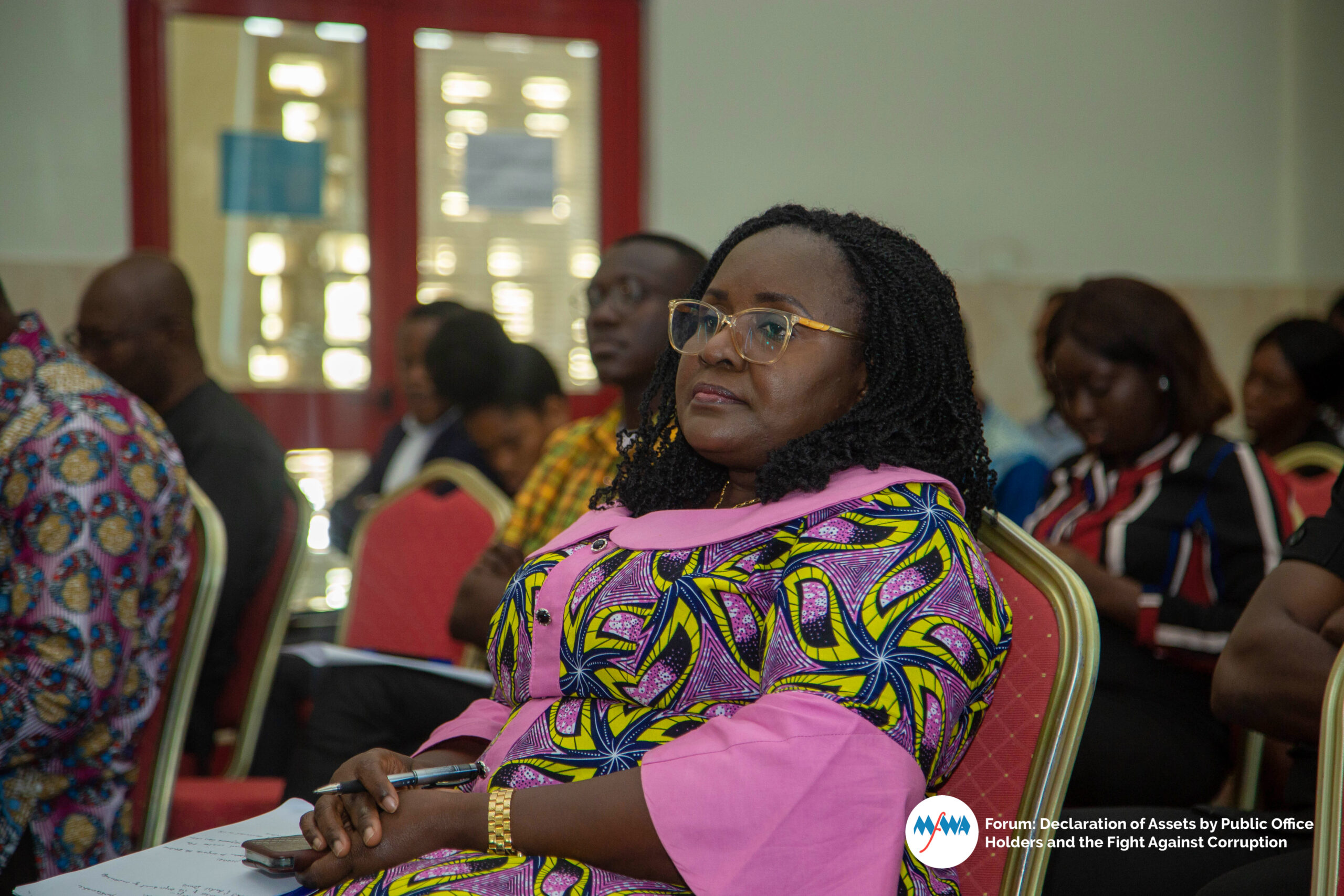 The Executive Director of the Ghana Integrity Initiative, Linda Ofori-Kwafo entreated all present at the forum to do their best to help Ghana root out the corruption menace. 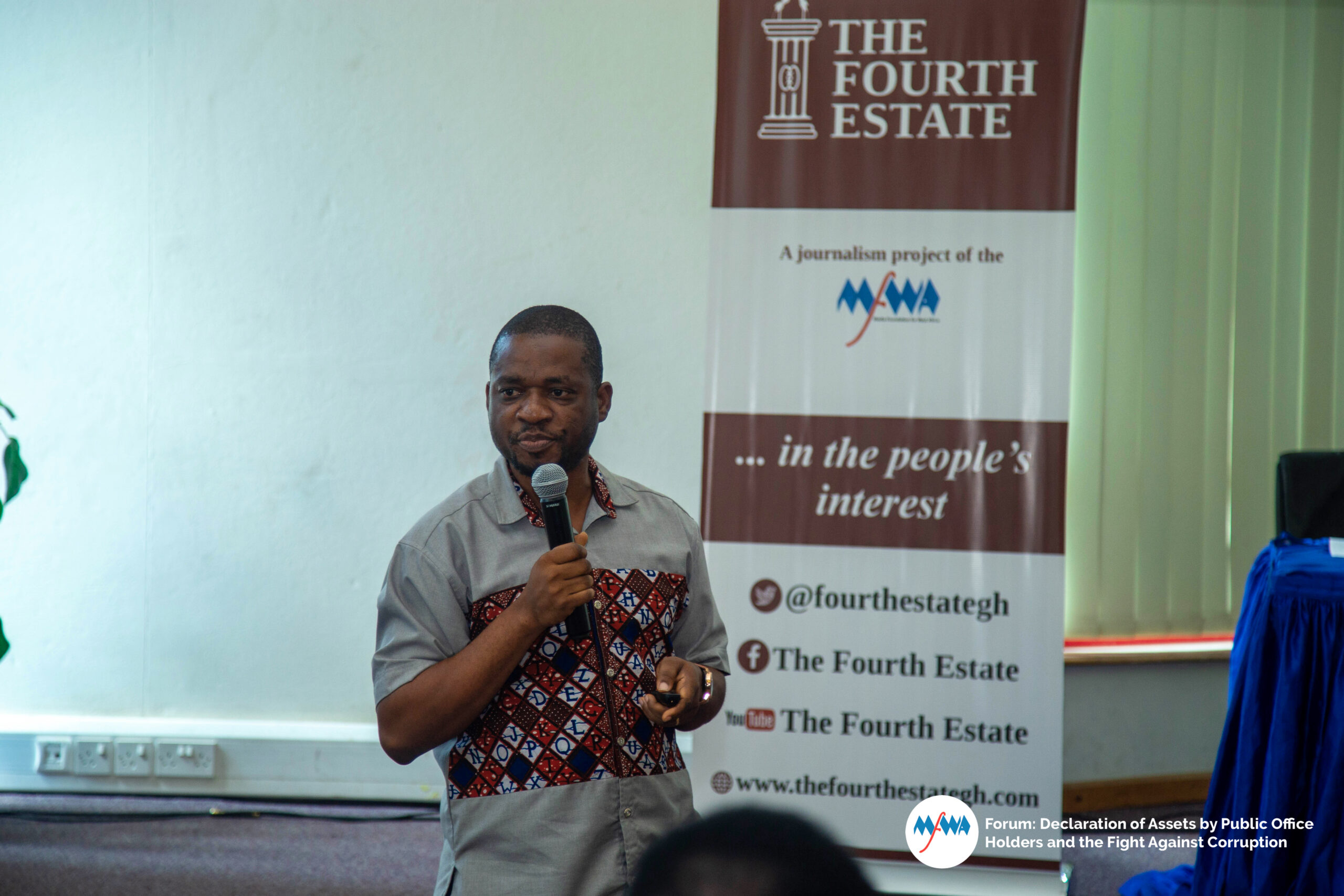 Seth Bokpe of The Fourth Estate, MFWA’s accountability journalism project, gave a presentation on the Fourth Estate’s findings on the level of compliance with the asset declaration law in Ghana. 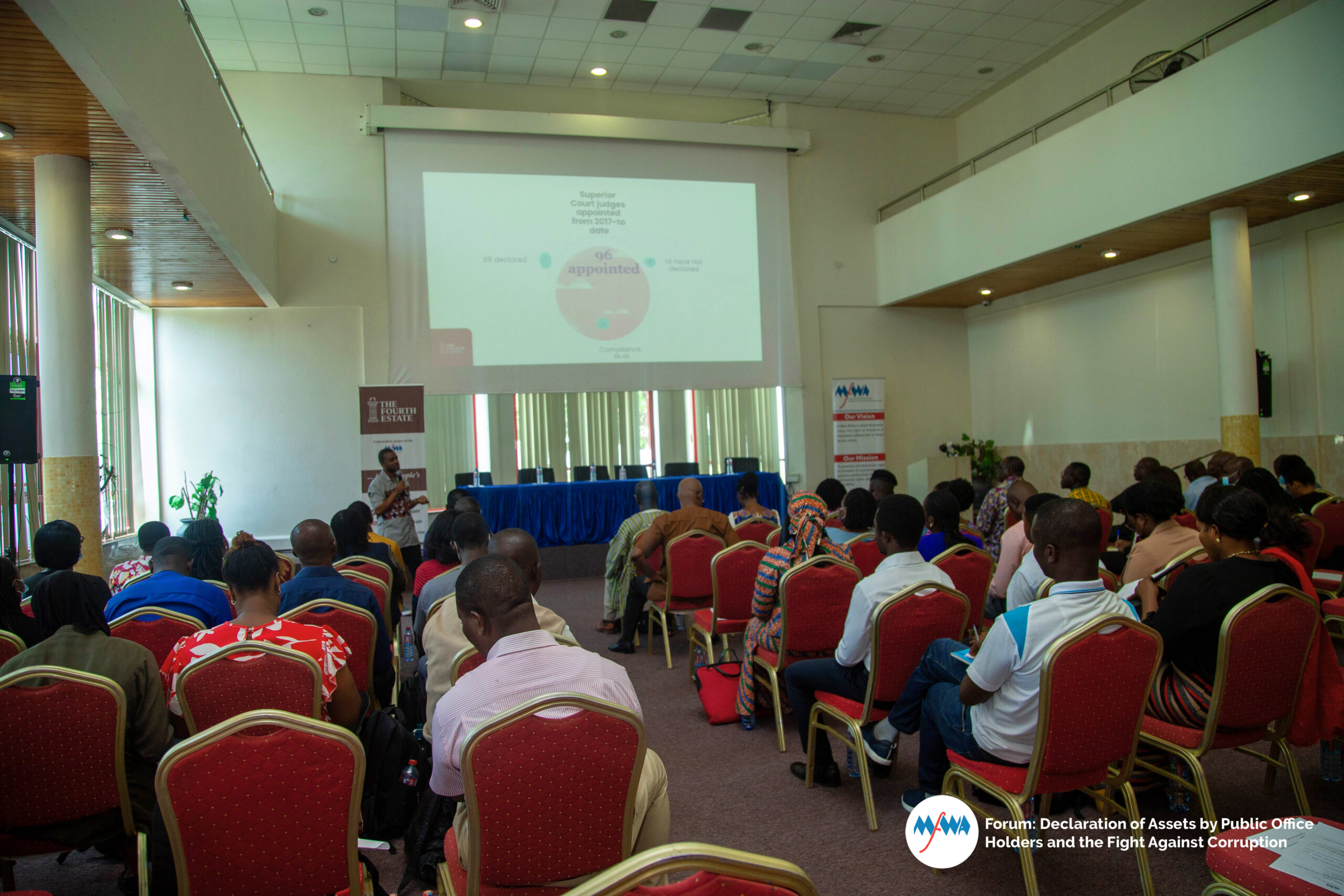 Seth’s presentation detailed that despite the President Akufo-Addo’s promise that he will ensure his appointees declare their assets, most of them have not fully complied with the law. This includes the Vice President, Dr Mahamudu Bawumia.

The presentation’s findings that there is widespread disregard for the asset declaration law saw panelists at the forum vent their frustration. However, they also proffered solutions which if implemented, could bolster the law and inspire compliance. 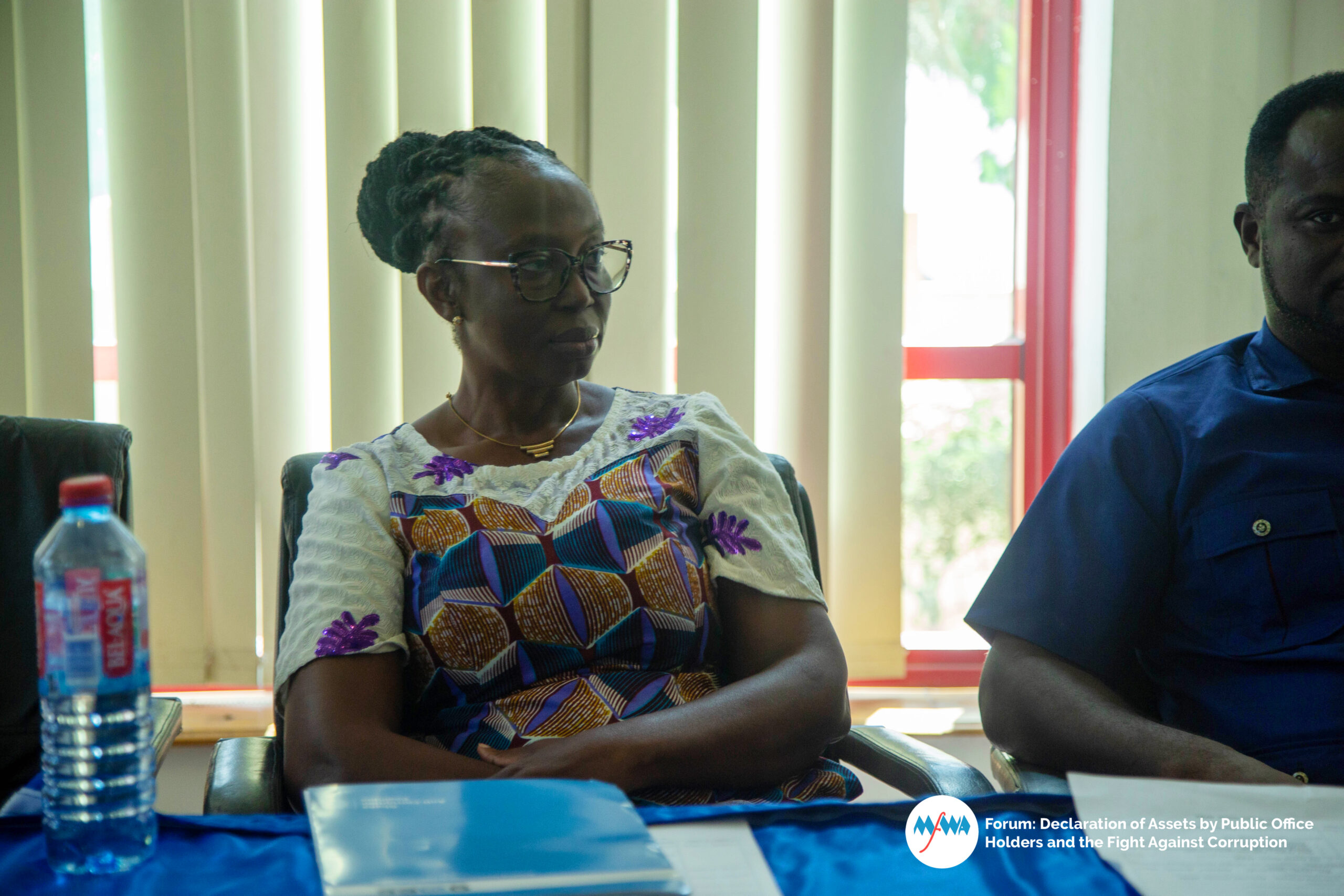 President Akufo-Addo publicly said in 2017 that all his ministerial appointees had declared their assets. However, The Fourth Estate’s series showed that many of them had not, a situation Mrs. Beauty Narteh, Executive Director of Ghana Anti-Corruption Coalition (GACC), said should have prompted the president to act.

“So, if the president was deceived by his appointees that they had declared their assets while they actually had not done so, my expectation was to have a quick response from the president, sanctioning those appointees for deception, which is a criminal offence. But nothing has been done so far unless it’s been done on the blindside of the public,” she said. 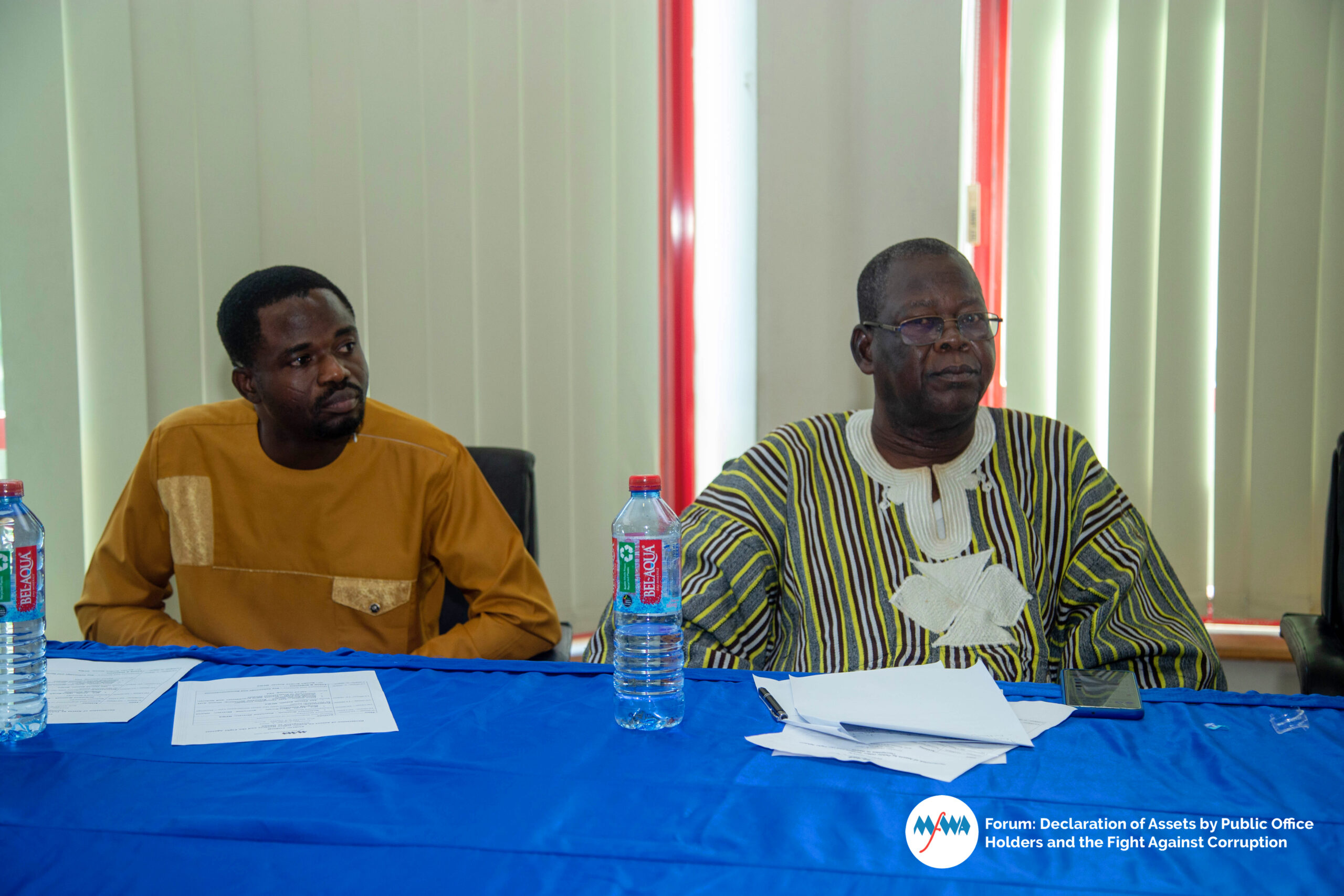 Manasseh Azure Awuni (left), Editor-in-Chief of The Fourth Estate and Vitus Azeem (right), a renowned anti-corruption crusader, were panelists at the forum.

Mr. Vitus Azeem demanded more commitment from the country’s political leadership. Mr Azeem stressed the need for the prosecuting agencies in the country to care more about lifestyle auditing. This, he said, could help expose most of the public officials who are gaining illicit wealth.

He recommended that public service holders voluntarily declare their assets because it protects them from unproven allegations of corruptions that may be levelled against them by their detractors.

Manasseh Azure Awuni reiterated the point that the heads of institutions mandated to enforce the asset declaration law must be up and doing. He added that they must be bold to fight the canker as “they won’t go hungry if they do their work. A week after he was removed from office, former Auditor General, Domelevo, had another job”. 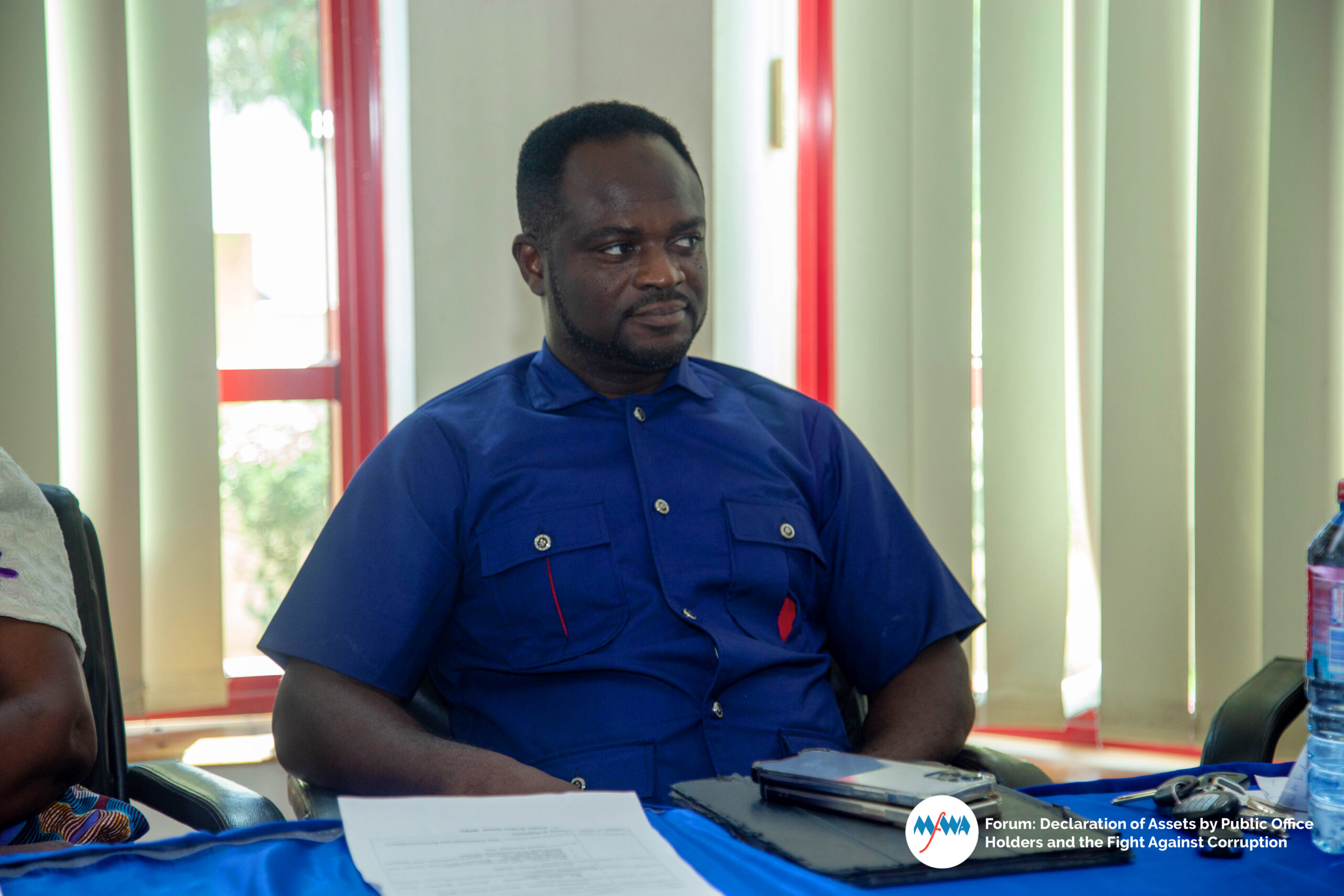 One of the panelists, Justice Abdulai, a law lecturer at the University of Professional Studies, called on CHRAJ to sit up and use its powers to compel recalcitrant public officeholders to declare their assets. 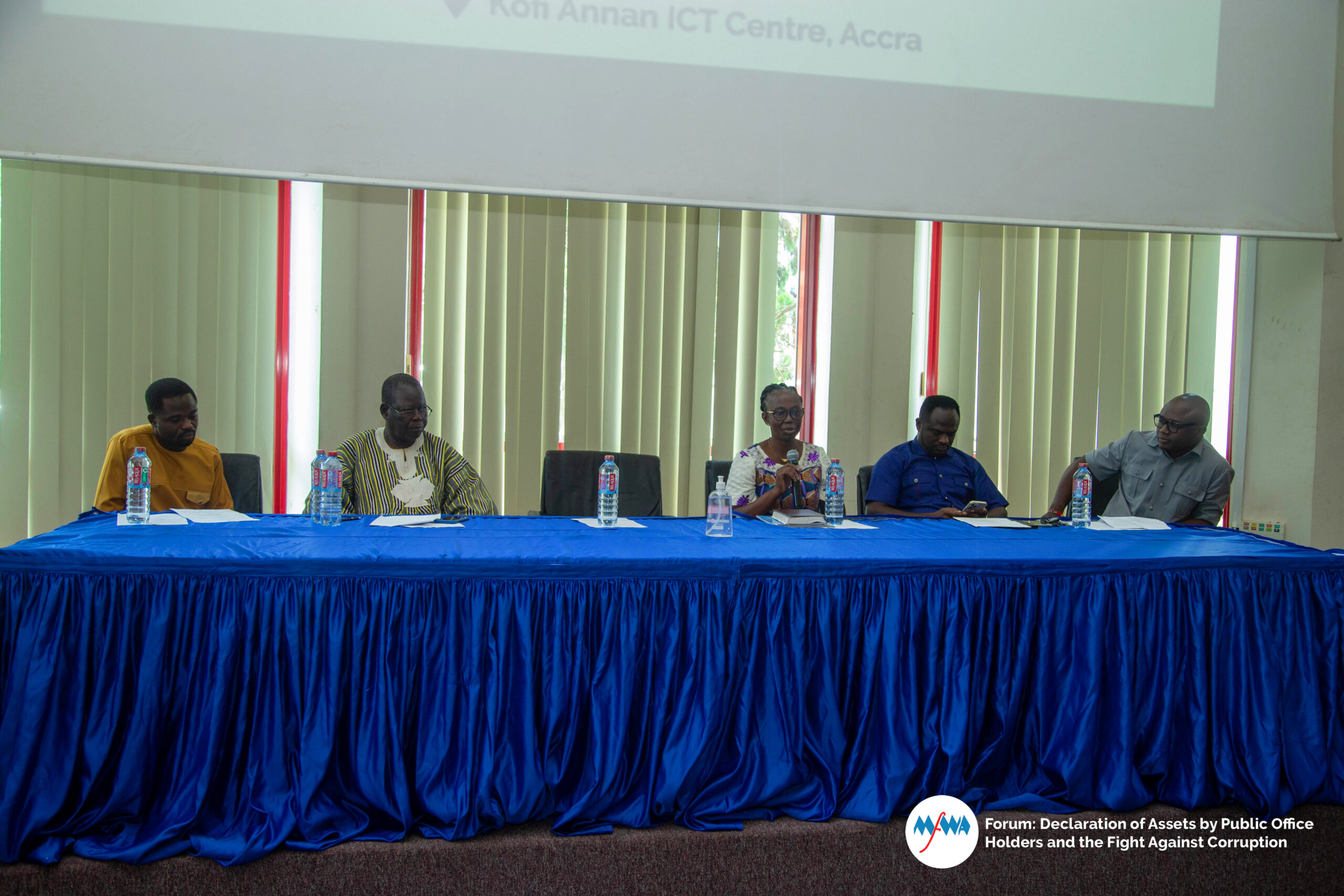 Mrs. Narteh faulted the asset declaration regime for failing to provide the necessary framework for verifying declared assets and liabilities.

“So, I can say that the asset declaration regime, as it stands, has not provided the needed framework for us to be able to ascertain the issues around the verification of the assets.”

The panelists agreed that the assets declared by public officeholders must be made public instead of sealing their content, an act they said makes the whole point of the law ineffective. 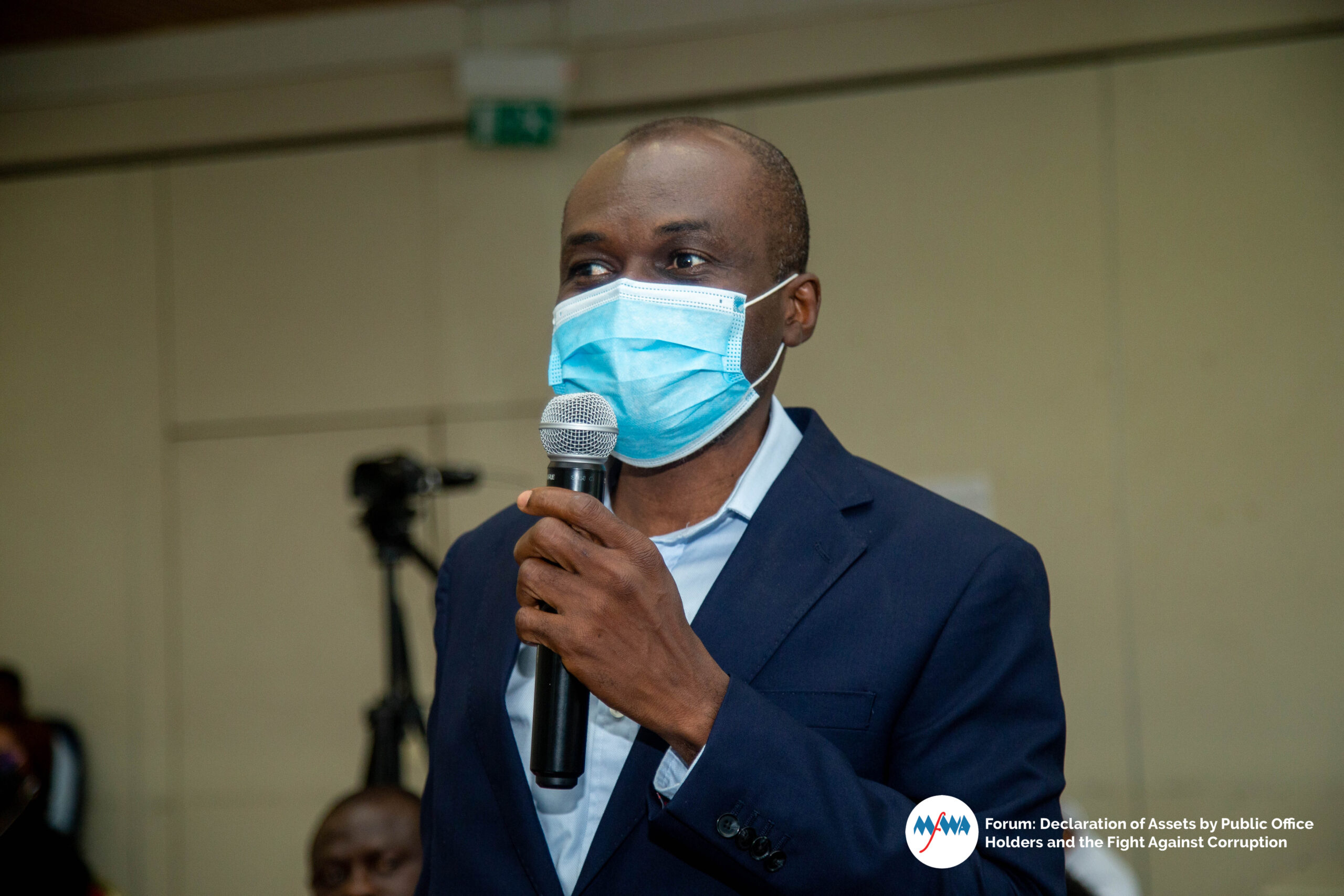 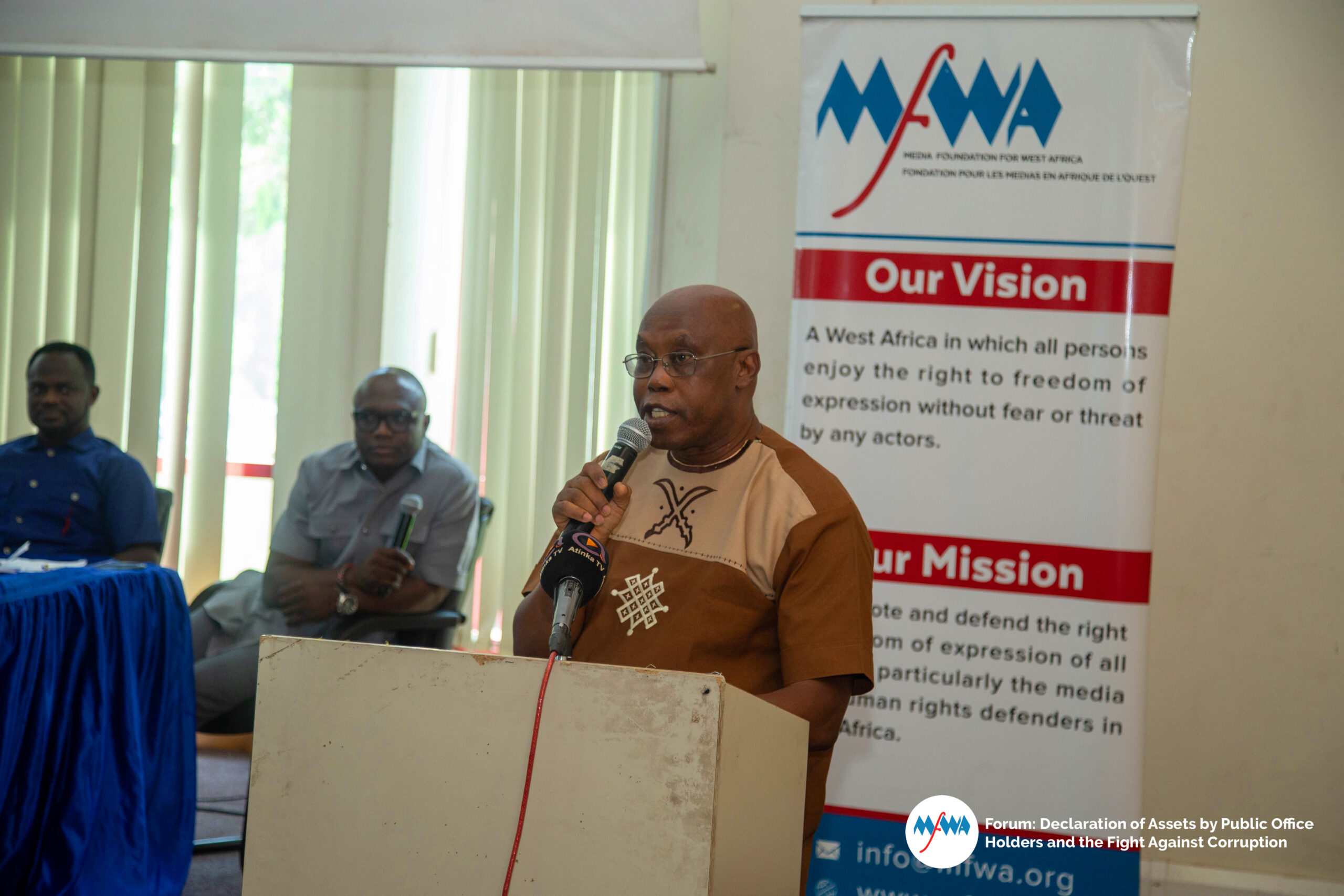 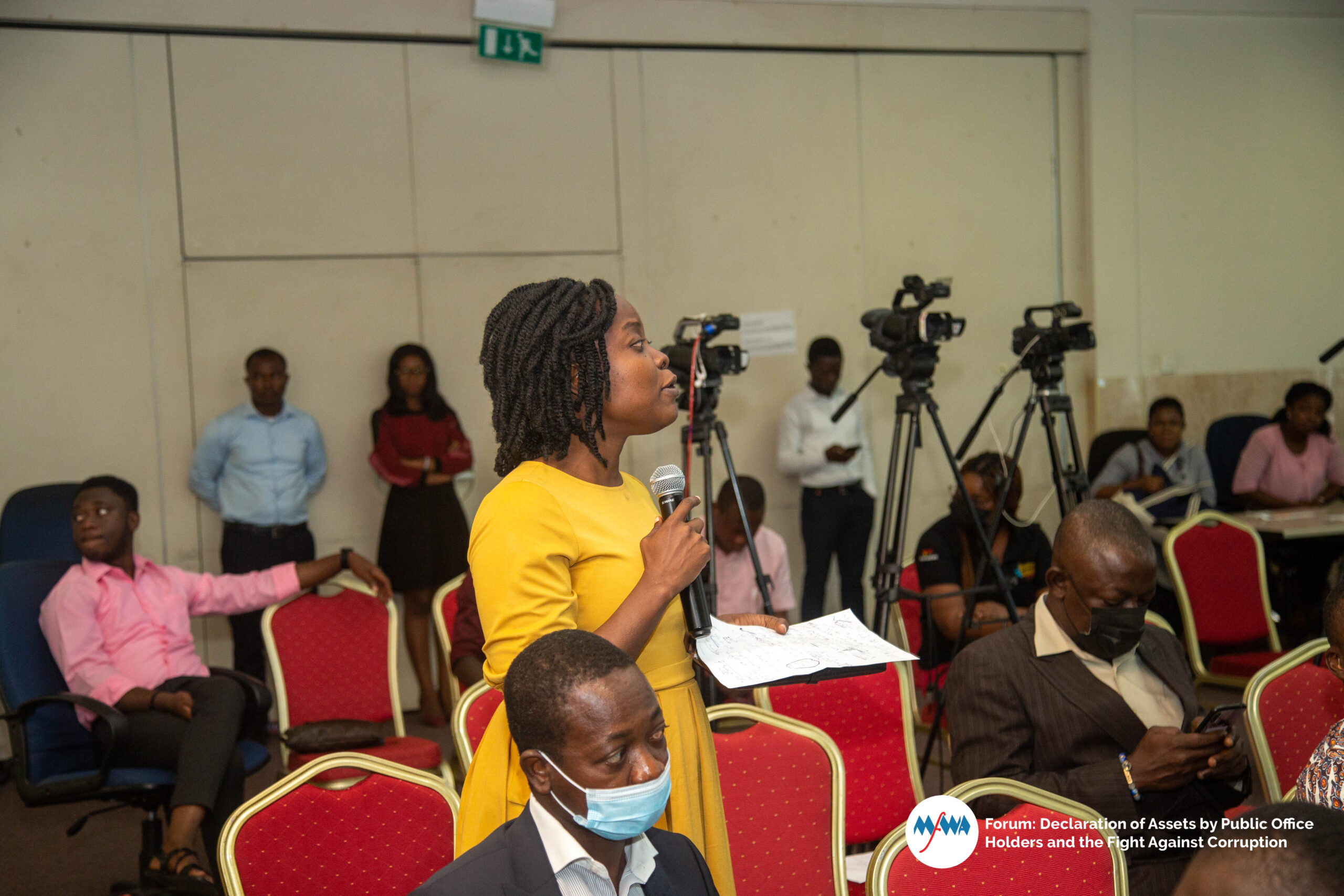 Participants also discussed and proffered suggestions on more effective ways to make the Asset Declaration Law more potent for transparency and accountability. A chunk of the problems was attributed to the ineffective work of the Commission for Human Rights and Administrative Justice (CHRAJ) and the Audit Service. These accountability institutions were charged to “do more”. 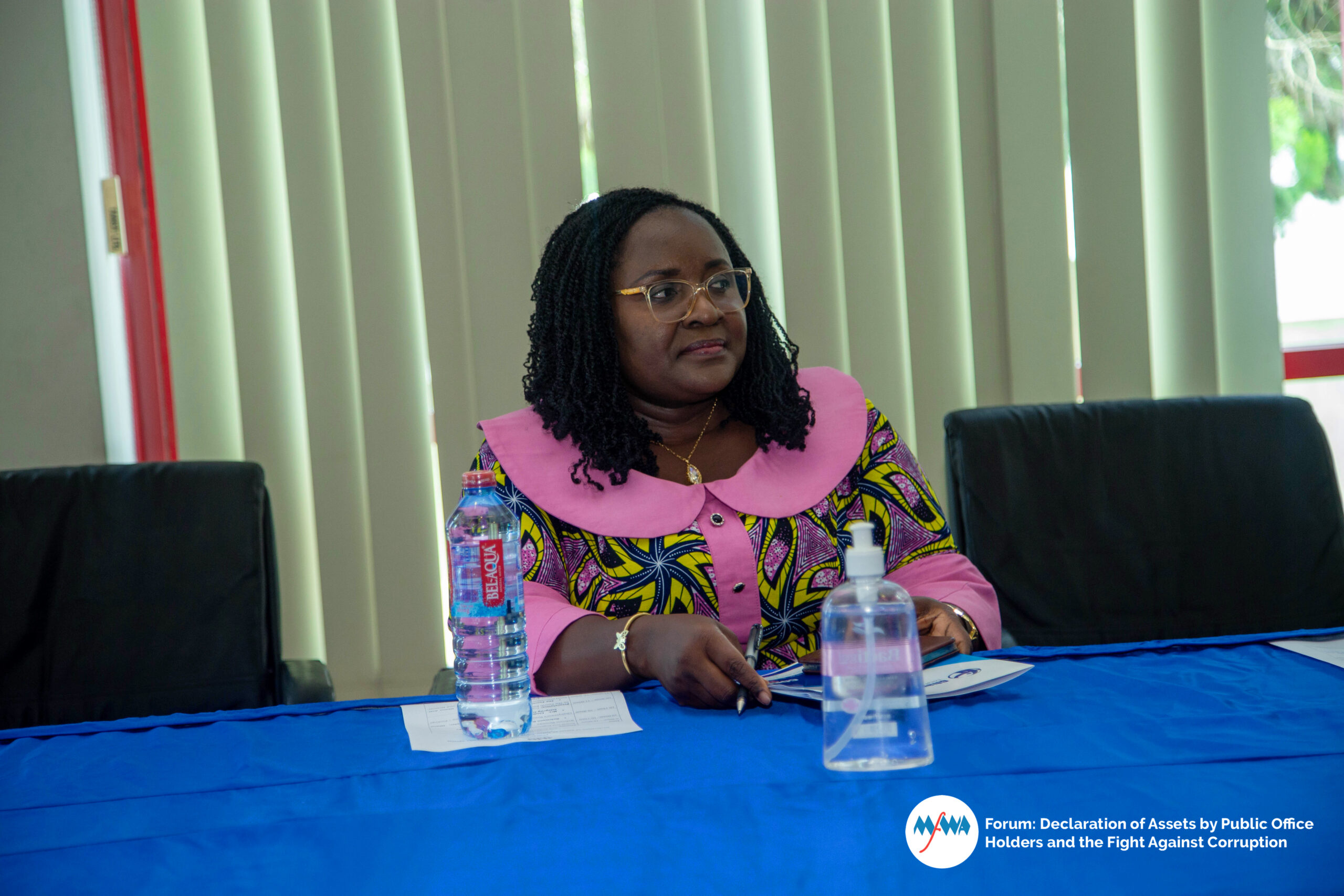 In the closing remarks of the chairperson, Mrs. Ofori-Kwafo underscored that “without genuine commitment and the will to see it through whatever we agree on may just be a waste. The key word here is ACTION.” 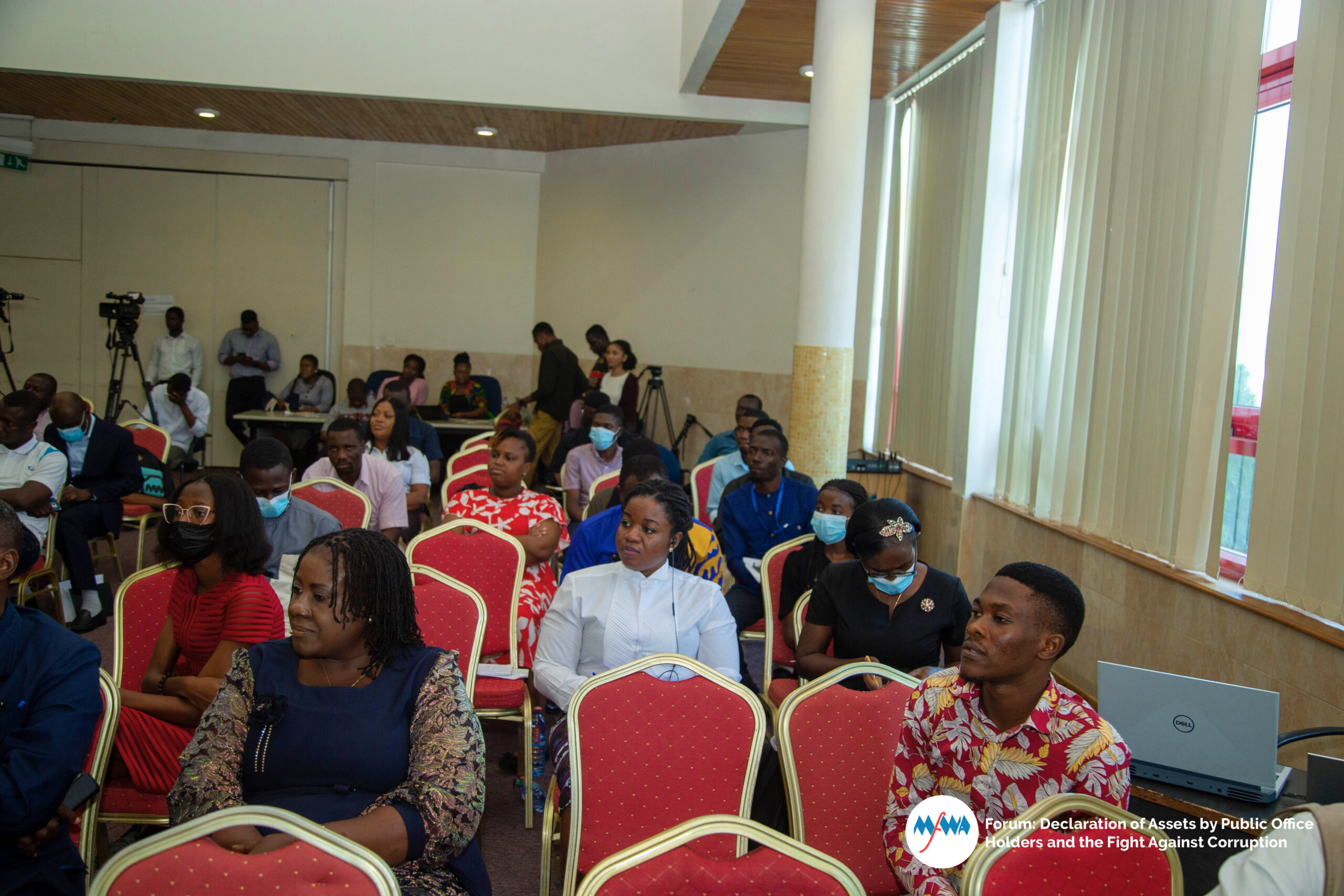 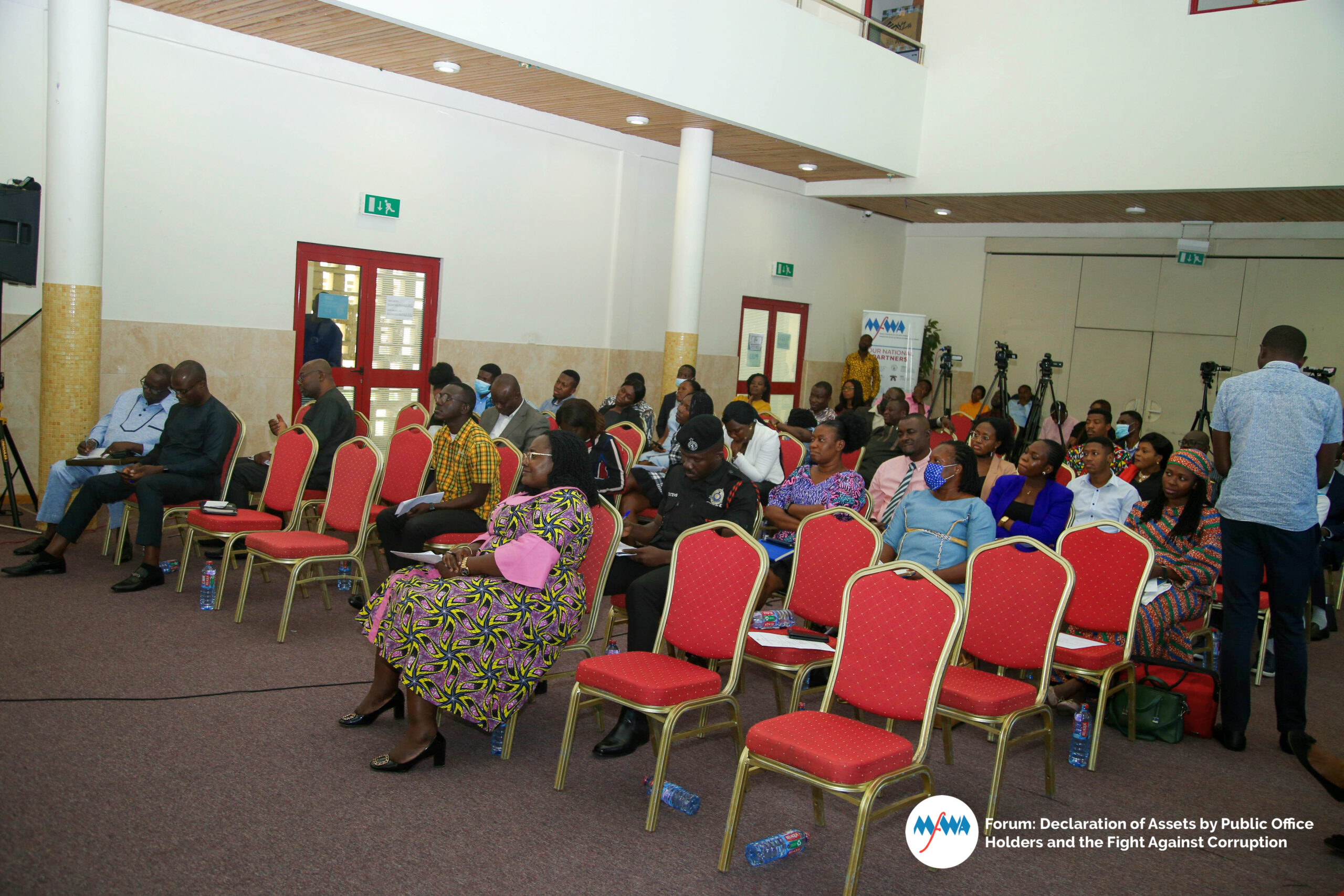 TogoFree Expression and The Law

Gagging of the Media: Journalists Barred from covering Demonstration