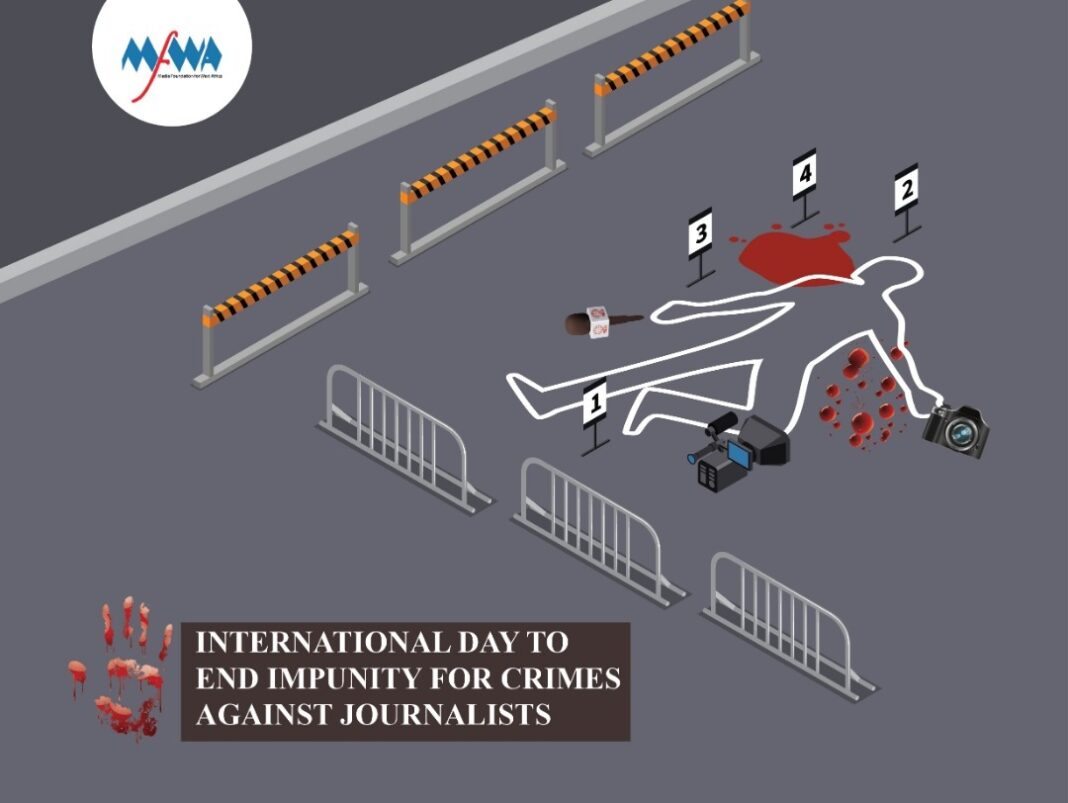 As the world marks the International Day to End Impunity for Crimes against Journalists, the Media Foundation for West Africa (MFWA) expresses solidarity with journalists subjected to severe acts of brutality. Our hearts go out in genuine sympathy with the relatives, friends and colleagues of journalists murdered in the line of duty or for their work, and wish those surviving traumatic conditions complete recovery.

To mark the day, the MFWA is hereby highlighting cases of impunity for killings, kidnapping and brutal assault against journalists recorded across West Africa over the past five years. This initiative is in line with Indicator 16.10.1. of the Sustainable Development Goals (SDG) 16.10 which focuses on the need to keep records on the “number of verified cases of killing, kidnapping, enforced disappearance, arbitrary detention and torture of journalists, associated media personnel, trade unionists and human rights advocates in the previous 12 months.

Ikechukwu Onubogu, a cameraman with the Anambra Broadcasting Services in Nigeria, was found dead on November 16, four days after he was reported missing by his family. Onubogu had picked up his camera and left home in response to a phone call from an unknown person.

Lawrence Okojie, a journalist with the Nigeria Television Authority (NTA), in Edo State, Nigeria. Shot dead after dropping off a bus at a junction near his home. He was returning from work on July 8, 2017.

Famous Giobaro, a desk editor with Glory FM in Bayelsa State, was shot dead by unknown gunmen at his residence on April 16, 2017.

Maxwell Nashan, a journalist with the Federal Radio Corporation of Nigeria (FRCN), Adamawa State was, found tied and muzzled in a bush with his body hacked at several places. He died on arrival at the hospital on January 15, 2019. He had been abducted from his house the previous day.

Alex Ogbu, a reporter with Regent African Times in Abuja, was killed by a stray bullet from the Police who had clashed with protesting members of the Islamic Movement of Nigeria (IMN) on January 28, 2020.

Precious Owolabi, a reporter with the Channels Television, died of his injuries after he was hit by a bullet while covering a protest on July 22, 2019, in Abuja. Assaulted and taken away in a police car alongside some arrested protesters on October 24, 2020, Pelumi Onifade, who was covering the #EndSARS protests for Gboah TV, an online was found dead a week later in a mortuary in Ikorodu Lagos.

In Burkina Faso, reporter David Beriain and cameraman Roberto Fraile, both Spanish nationals, were shot dead by suspected jihadist rebels in Burkina Faso on April 26, 2021. The armed group opened fire on a convoy of soldiers who accompanied the journalists to shoot a documentary at a national park.

On January 16, 2019, an investigative journalist, Ahmed Suale, was murdered in cold blood in Accra, Ghana, with the perpetrators yet to be found.

On March 27, 2018, a police officer brutally attacked Latif Iddris, a reporter from Joy News, one of the platforms of the Multimedia Group based in Accra.

Latif Iddris had gone to cover protests at the Criminal Investigations Department of the Ghana Police Service, where a leading member of Ghana’s main opposition party was being held on treason charges. The journalist was kicked, hit in the rib and on the head by several police officers, some with the butt of their guns. Iddris had his skull broken in the attack.

Zenu Miller, a presenter with the privately-owned Okay FM based in Liberia’s capital, Monrovia, was brutally assaulted by officers of the Executive Protection Service (EPS), President Weah’s elite bodyguards on January 26, 2020. He was covering a football match at the Samuel Kanyon Doe Sports Complex. The journalist was covering the final of a football match. The radio presenter sought medical treatment for chest and body pains the following morning. He subsequently missed several days of work as he pursued treatment before fully resuming.

On February 15, 2020, exactly 21 days after the assault, the journalist died. He was rushed to the hospital after a sudden deterioration in his condition but was pronounced dead a few hours after admission.

Oludare Richards, a reporter for The Guardian newspaper, was brutalised by security agents on November 12, 2019. He was covering a demonstration at the headquarters of the State Security Services (SSS). Photos of the bleeding Oludare with his blood-stained badge on his chest went viral.

On April 2, 2020, a military officer in Sierra Leone brutalized Fayia Amara Fayia, a journalist with Standard Times newspaper and seized his phone. The journalist had gone to a suspected COVID-19 quarantine venue to report on activities. Having been denied entry into the facility together with other journalists present, Fayia decided to take photos with his phone from a distance, a gesture that a military officer identified as Major Fofanah found to be provocative. The soldier lunged into Fayia and grabbed his mobile phone, before calling his colleagues, about nine, to subject the journalist to a severe beating.

The soldiers took the journalist to the police station, where he fell unconscious. He was rushed to the Kenema Government Hospital where he was admitted and confined to a wheelchair, still under police custody. Fayia was returned to the police station upon his discharge and detained for three days. Seven days after soldiers assaulted the journalist, the police arraigned him before a Magistrate’s Court in Kenema on three counts of assault, disorderly behaviour and obstruction of security officers’ duties. The charges carry a minimum sentence of two years.

On March 9, 2021, in Bissau, the capital of Guinea-Bissau, freelance journalist António Aly Silva, editor of the blog Ditadura do Consenso and a critic of the regime of President Úmaro Sissoco Embaló, was abducted, by some unknown persons, brutalised and abandoned by the roadside.

On May 7, 2021, security officers brutalised Peter Tabiri, a correspondent of Pent TV in Asankragua in the Western North Region of Ghana. The journalist was reporting the secret operation of the officers on the phone to the District Police Commander when the security officers pounced on him. He emerged with a damaged eardrum and severe bruises.  The Amenfi Divisional Commander of Police later confirmed that he was unaware of the operation of the officers.

On February 7, 2022, journalist Maimuna Bari jumped down from the first floor of the building housing Radio Capital, following an armed attack on the radio station based in Bissau. She suffered rib and spine injuries and fell into a coma. Bari is still receiving treatment in Lisbon, Portugal.

Agba Jalingo, the publisher of Cross River Watch online newspaper, was arrested by police at his Lagos residence on August 22, 2019, and taken into custody. He spent 179 days in detention and was chained to a fridge at some point.

Journalist Olivier Dubois and French national was abducted on April 8, 2021 in Gao, Mali. On May 5, 2021, he posted a video in which he revealed being in the hands of  the GSIM (Groupe de soutien à l’Islam et aux musulmans), a branch of Al Qaïda. He has since not been seen or heard from.