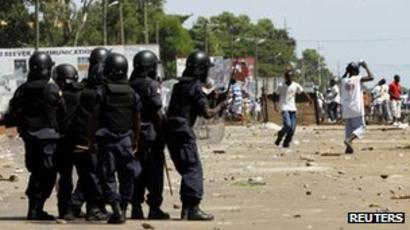 Liberian authorities must investigate recent incidents of assault on Journalists at sporting events in the country and take steps to provide more effective protection to the media at the various stadia.

A presenter with the privately-owned Okay FM based in the Capital Monrovia reported having been assaulted during the final football match of the 2020 National County Meet between Nimba and Grand Kru Counties at Samuel Kanyon Doe Sport Complex on January 26, 2020.

“I was attacked tonight at the SKD [“Samuel Kanyon Doe” Stadium] by EPS [Executive Protective Service] officers in the full view of the EPS director. Gosh!!!” Zenu Miller posted on Facebook.

Miller, who is a popular Talk Show host at Okay FM, again took to social media the next morning to reveal that he suffered severe pains in the chest and legs as a result of the assault, forcing him to seek medical treatment.

The attack on Miller came just two days after another journalist, Christopher Walker of the FrontPageAfrica online newspaper, was assaulted, also by security personnel, while he was covering a football match at the same stadium on January 24, 2019.

Walker, was accosted by a police officer and asked to vacate the spot where he was standing with other journalists, only to be attacked when he inquired the reason for the discriminatory order.

“So I asked why I was the only person ordered to vacate the space which is designated for all journalists, …. “the police officer and several others came and angrily attacked and brutalized me as they sent me off the pitch” Walker narrated.

The journalist sustained injuries while his camera and laptop were damaged. An Editor at the newspaper, Alpha Senkpeni, told Centre for Peacebuilding and Media Studies (CEMESP), MFWA’s national partner organisation in Liberia, that he suspected the attack was related to an article Walker had written about alleged attempts by the Ministry of Youth and Sports to interfere with the day’s fixtures.

The Management of FrontPageAfrica has called for investigations into the incident, a call which has been backed by CEMSP.

The MFWA is deeply concerned about the spate of attacks on journalists by security forces during sporting events in Liberia. There have been four reported incidents of such attacks over the past seven months..

Webster Cassell, the Sports Editor of the INQUIRER newspaper was manhandled by some armed police officers while the journalist was covering a football match at the Antoinette Tubman Stadium in Monrovia on June 10, 2019.

The officers, who presented no warrant, said they were arresting Webster on the orders of Wilmot Smith, a Vice President of the Liberian Football Association. The newspaper had published a critical story about the football administrator that very day.

Michael Solomon of Prime FM was also manhandled by the police and forced to delete pictures of the altercation between them (the police) and Webster.

The MFWA views these attacks on sports journalists as a dent on Liberia’s press freedom image, and especially alarming because the perpetrators in all the cases have been state security agents. We therefore call on the authorities in Liberia to investigate the recent attacks on Zenu Miller and Christopher Walker and to take steps to end the assault on media personnel during sporting events.