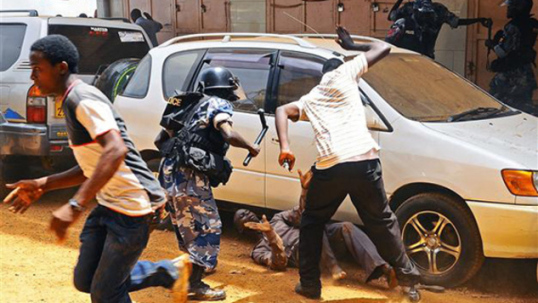 June 2018 was marred by police brutalities against demonstrators in The Gambia and Mali, as well as the arbitrary detention of a journalist and a social media activist in Guinea and Burkina Faso, respectively.

On June 18, the police in The Gambia shot and killed two people and injured many others in a crackdown on a demonstration by residents of the village of Faraba who were protesting against destructive sand winning activities on their land. Meanwhile, Pa Modou Bojang, a journalist covering the bloody events, was brutalised and detained for about six hours by the police who also seized his recorder.

Two weeks earlier (June 2), the police in Mali had violently dispersed thousands of opposition demonstrators, injuring many including presidential candidate, Igor Mamadou Diarra, as well as journalists covering the demonstrations. More than 20 persons were injured in the encounter.

On June 1, that is a day before the Mali incident, revenue authorities in Benin ordered the freezing of the bank accounts of the Nouvelle Tribune newspaper in Benin for defaulting on its tax obligations. The revenue authorities had reached an agreement with management of the newspaper for the latter to pay its tax arrears of 12 million CFA francs (US$ 21,507) in instalments. However, they unilaterally terminated the agreement and asked for the sanctions to be imposed on the Nouvelle Tribune even after the newspaper had paid the first tranche. This was a further blow to the newspaper which had been arbitrarily suspended about three weeks earlier by the country’s media regulator.

On June 20, Guinea’s Minister of Justice, Cheick Sako, abused his authority by causing a journalist to be detained for allegedly defaming him in an article published by the online newspaper, Nouvellesguinee.com. The Minister’s action was in breach of Guinea’s Press Law adopted on July 22, 2010 which decriminalises press offenses and excludes the keeping of journalists on remand or in detention for press offenses.

A week before the incident in Guinea (June 14), the military authorities in Burkina Faso arrested and detained an activist who criticised the National Gendarmerie for their alleged neglect of a gendarme who was wounded in the course of duty. Naim Toure was arrested a day after he condemned the security hierarchy on his Facebook page for allegedly neglecting the gendarme “who risked his life to protect national security.”

As if the month had not witnessed enough reverses, Mauritania was plunged into a partial news blackout on June 18 as the print media was affected by a strike action by workers of the state printing press, which prints all newspapers in the country. As a result, Mauritania hosted the African Union Summit on July 1-2, 2018 without any newspapers covering the events.