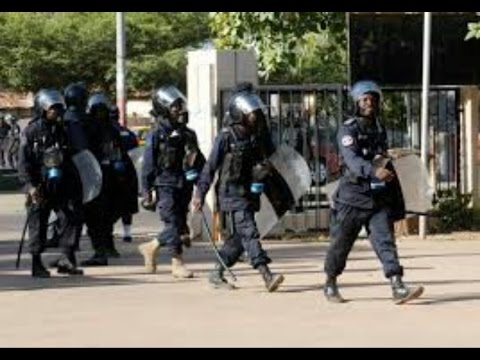 The police in The Gambia have shot two people dead and injured many others in a crackdown on a demonstration.

On June 18, residents ofFaraba village near the capital Banjul went on a demonstration to protest against the sand winning activities of a private firm in their community. The Police Intervention Unit (PIU), which was deployed to control the crowd, clashed with the protesters and started firing live bullets. In the process, two people were fatally hit by live bullets while seven others were injured.

The Inspector General of Police said in a statement that the police deployed on site were not allowed to use their firearms.

Gambian President Adama Barrow has called for restraint, adding that “three armed police are in detention.” The statement from the presidency also “ordered a thorough investigation into the matter as quickly as possible.”

Meanwhile, Pa Modou Bojang a journalist covering the bloody events was brutalised and detained by the police. His recorder was also seized. He reportedly took cover when the police started firing however an officer spotted him (Bojang) in his hideout and started assaulting him.

“One of the police personnel came from behind and asked what I was doing there. He slapped me in the face the moment I told him I am a journalist,” Bojang said. The beating became even more brutal as more personnel joined him in beating me. I got injured in my head and gum as well as other parts of my body.”

The journalist was subsequently taken to Brikama Police Station and detained for about six hours before being released.  He however could not recover his audio recorder from the police. Bojang later went to the hospital for treatment.

The incident has been condemned across the country. In a statement, the Secretary General of The Gambia Press Union, Saikou Jammeh, said: “These attacks are a step backwards for press freedom in The Gambia. We will take all measures appropriate and necessary to ensure that the perpetrators of this attack face justice and the journalist is rewarded for damages.”

The MFWA is equally concerned about this bloody incident in The Gambia which otherwise has recorded some encouraging developments in its freedom of expression environment in the last one year. We call on the authorities to conduct thorough investigations into the attacks and ensure justice for the victims to send a clear message to the perpetrators that the era of impunity in The Gambia is over. We urge the government to, as a matter of urgency, reform the police and other security agencies to ensure that demonstrations are controlled in accordance with international human rights standards.