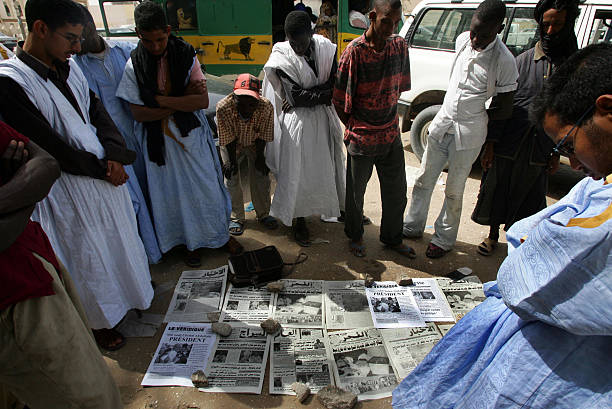 With legislative elections due in two months’ time, Mauritania’s newsstands have been empty following a strike by workers of the state printing press which has paralysed the print media industry since June 18, 2018.

All the newspapers in the country are printed by the state printing press, Imprimerie Nationale, and have, therefore, been caught in the crossfire of the strike action.

Workers of the Imprimerie Nationale are protesting the non-payment of government subsidy to the organisation for two years. They are also denouncing the failure of state institutions to settle their indebtedness to them, which has resulted in salaries falling into arrears, with social security and health insurance premiums unpaid for four months.

It is the second time this year that the print media in Mauritania have been let down by the state printing house. From December 11, 2017 to mid-January, 2018, the publishing house was hit by acute shortage of newsprints, resulting in empty newsstandsfor over a month, with about twenty newspapers affected.

Expressing his frustrations at the woes of the state printing press Moussa Samba Sy, President of the Regroupement de la Presse Mauritanienne, MFWA’s partner organisation in Mauritania, has said he suspects the act to be a government’s ploy to stifle the media.

“The national printing house depends on the state; it is obvious to some people that the government is using this to muzzle the press,” Samba lamented.

The vast, mostly desert, landscape of Mauritania makes newspaper distribution a daunting task. As a result, circulation is often limited to the capital and a few accessible cities, a limitation that translates into inadequate sales revenue and, ultimately, threat to sustainability.

In a bid to ease the crippling burden, the government intervened to offer support through subsidized newsprints and printing cost. However, the dependence on state subvention has put the private print media at the mercy of the government which can decide, and does sometimes decide, to switch off the subvention oxygen to suffocate the “ungrateful” beneficiaries and whip them into line.

In February 2016, for example, the government forbade all public departments and agencies from taking subscriptions and placing ads in private newspapers. Despite the authorities’ assurances that it was a temporary measure pending the introduction of a law to regulate such transactions, no bill has been laid before parliament to that effect, more than two years on.

The government’s handshake with the newspaper industry in Mauritania has clearly gone beyond the elbow. The embrace is getting too tight and suffocating, and the gesture of support is turning into something of a Trojan horse.

This is the time the private press in Mauritania desperately needs its independence and serenity to help mediate the political discourse for legislative and local elections which the country’s Electoral Commission has fixed for September 1, 2018, a little over two months from now.  Official campaigning is scheduled for August 17-30, the Commission has stated. It is a measure of the deficit in access to independent information sources in Mauritania that the country has only five private TV stations and the same number of independent radio stations. Moreover, these electronic media outlets were allowed to operate only as recently as 2013.

Given the paltry size and relatively young electronic media industry, the continued absence of the about twenty independent newspapers and state-owned newspapers from the newsstands plunges the upcoming elections into profound media blackout. This is a rude test for media pluralism and citizens’ right to information. If not resolved immediately, the situation could affect fairness and balance in media coverage, the transparency of the electoral process and the credibility of the outcome.

The controversial referendum of August 5, 2017 recorded a paltry 53% turnout. If that is anything to go by, then a similar, if not worse turnout is highly probable, should the current newspaper crisis persist to deny the electoral process of the critical input of the print media.