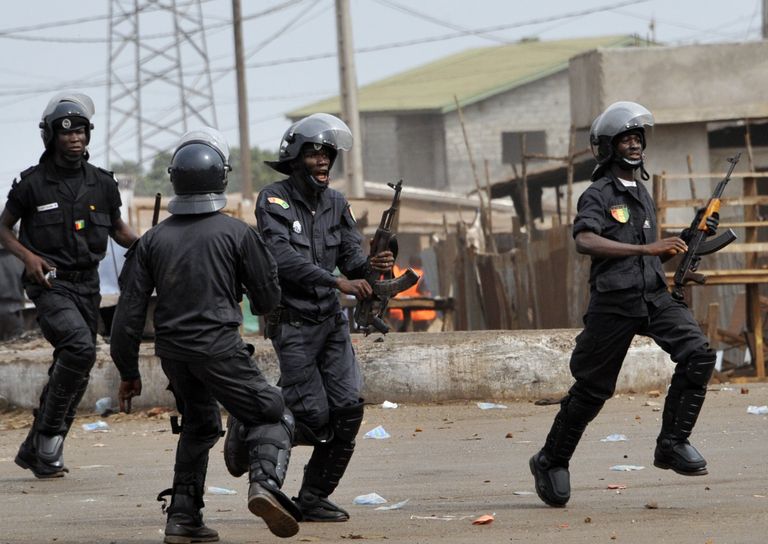 The nine, mostly students, met their untimely deaths during demonstrations they embarked on to express their grievances. In the case of Guinea and Sierra Leone, students were demonstrating to express their frustrations about prolonged strikes by teachers which was having effect on their studies.

In the case of Togo, however, the demonstrators were commercial drivers who were protesting against fuel price increment.

On February 21, 2017, in Guinea, seven people were killed after police clashed with protesters who were demanding the reopening of schools that have been shut down after seven weeks of teachers’ strike. Five of the dead were male students. The other two were by-standers; a male shopkeeper and a housewife.

During the protest, the demonstrators, mostly students, set up road blocks while others set fire to tyres and threw them into the streets. Police stationed at vantage points to protect lives and property, fired tear gas and warning shots to disperse the crowd. The protesters responded by throwing stones at the police. This resulted in a clash leading to the death of the seven people with several others injured.

On February 28, 2017, attempts by gendarmes in Togo to disperse thousands of taxi and commercial motorcycle drivers who were demonstrating against fuel price increases in Lomé left one person dead and several others injured. The demonstration took place in the afternoon, a day after the government announced increases in the prices of petroleum products by 10 percent. It was the second time in one month that fuel prices had been increased in the country.

During the demonstration drivers erected barricades and blocked the streets which resulted in traffic jam. Security forces who were deployed to clear the traffic and maintain order, threw tear gas and fired warning shots to disperse the protestors. One demonstrator, Alabi Nadjinoudine, died on the spot when he was hit by a bullet. Several others got injured in the stampede that ensued.

In Sierra Leone, a police officer killed one person, injured several others and arrested dozens in an attempt to quell protests by students of the University of Njala, located in the city of Bo in South-Eastern part of the country.

On March 24, 2017 students of the University of Njala poured onto the streets of Bo to denounce what they called “government’s lack of interest” in solving a strike action by lecturers which had held up their studies since November, 2016.

While demonstrating, the student protesters mounted barricades on the streets.  In an attempt to disperse them, the police threw tear gas into the crowd of protesting students, many of whom fell and got trampled while trying to flee from the acrid fumes. One student however died after being hit by a live bullet.

The MFWA is concerned about the increasing use of excessive force by security forces in dispersing demonstrators. The use of live bullets to control peaceful demonstrators is unacceptable, condemnable and must be taken completely out of protest control measures. The increasing use of tear gas also leads to stampedes which results in lots of injuries.

The MFWA is urging security forces to restrategise on how to manage demonstrators so that lives can be protected at all times, especially as protestors have the right to express their grievances as guaranteed by the constitution of the three countries and many West African countries. We also urge the authorities in Guinea, Togo and Sierra Leone to investigate the deaths of the nine people and bring the perpetrators to book.

While calling on security forces in the region to revise their strategies for managing demonstrators, the MFWA also calls on protestors to exercise high levels of responsibility when demonstrating to make their grievances known to ensure that the core message of their demonstrations do not get drowned by violent clashes and related-incidents.