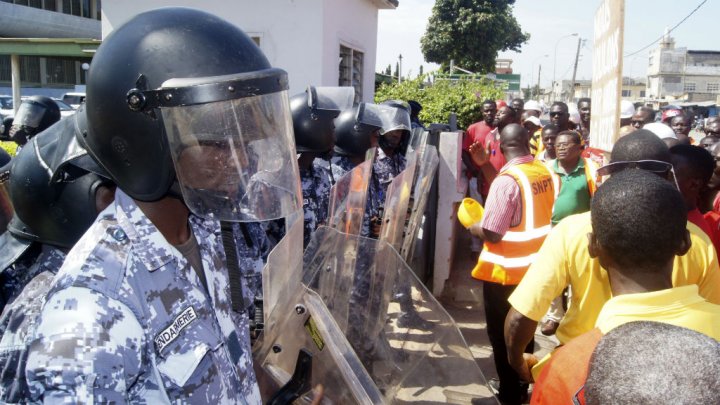 Attempts by gendarmes in Togo to disperse thousands of taxi and commercial motorcycle drivers who were demonstrating against fuel price increases in Lomé have left one person dead and several others injured.

The demonstration took place in the afternoon of February 28, 2017, a day after the government announced increases in the prices of petroleum products by up to ten percent. It is the second time in one month that fuel prices have been increased in Togo.

The MFWA’s correspondent in Togo reports that the taxi and commercial motorcycle drivers who feel that the hikes will affect their business, stormed the principal streets of Lomé in their thousands, denouncing the government. They erected barricades and blocked the streets, bringing traffic to a complete stop in the capital.

Security forces who were later deployed to clear the traffic and maintain order, threw tear gas and fired warning shots to disperse those erecting barricades and burning tyres on the streets. One demonstrator died on the spot when he was hit by a bullet while several others got injured in the ensuing stampede. The dead was identified as Alabi Nadjinoudine.

In a radio interview later in the day, the Minister of Security, Yark Damehame, confirmed the death and indicated that investigations have begun into the matter.

“Unfortunately, one person died from gunshot at Agoè Zongo about 6 pm; the Public Prosecutor has begun investigating the issue to enable us know exactly what happened,” the Minister said.

The MFWA finds the incident in Togo quite disturbing and denounces the use of live bullets to disperse demonstrators. While commending the Minister of Security and the Public Prosecutor for initiating investigations into the matter, the MFWA also urges them to ensure that the truth is established and that justice is done to all parties involved.