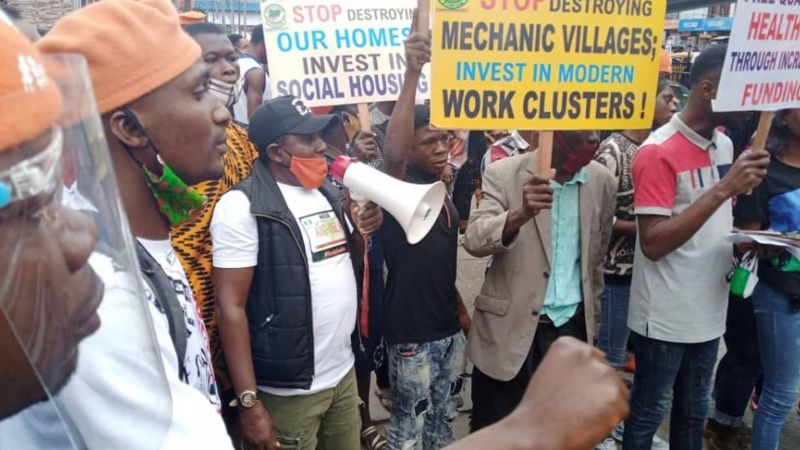 At least 40 people were arrested by security forces in Nigeria during a protest to mark the first anniversary of the Revolution Now Movement.

Viral images of the protesters lying prostrate on the ground and being shaved with knife and bottles sparked outrage.

First held on August 5, 2019, the Revolution Now protests demanded the resignation of President Mohamadu Buhari’s government for nonperformance. This year’s protest brought together hundreds of people from Lagos and other states.

However, like they did a year ago, the security forces attacked and arrested the demonstrators. The arrested protesters included journalist Agba Jalingo and civil society activists, Olawale Adebayo Bakare, who were arrested during the inaugural protest last year.  Dunnex Samuel, a student leader at Obafemi Awolowo University and Femi Adeyeye, an activist, were also identified among the arrested protest leaders.

The actions by the security forces have been widely condemned by human rights activists including the Executive Director of Global Rights, Abiodun Baiyewu who has asked President Muhammadu Buhari to apologize for the gross violation.

Mick Barry, an Irish politician and member of the Socialist Party, has also written to Dr. Uzoma Emenike, Nigeria’s Ambassador to Ireland, to express concern over the violent crackdown.

“It is completely unacceptable that young people protesting against state repression and the dire economic conditions that currently prevail in Nigeria should be oppressed in this brutal way,” the Sahara Reporters newspaper quoted the politician as saying.

Local media in Abuja reported that protesters that were arrested by the security forces were, later released.

The Media Foundation for West Africa is of the opinion that, the violent attack on the peaceful demonstrators is unconstitutional and represents an infringement on their  fundamental civil and political rights, under sections 39 and 40 of the Nigerian constitution that guarantees the right to freedom of expression, peaceful protests, assembly, and association.

Nigeria is also signatory to several regional and international frameworks that guarantee the rights to peaceful assembly and demonstrations. Therefore, it is unacceptable that security forces resort to force to frustrate peaceful protesters.

The Foundation welcomes the release of a number of the arrested protesters and demand the unconditional release of the rest still in detention. We further call for an inquiry into the degrading treatment of some of the protesters and appropriate sanctions against the perpetrators.