Upcoming: Media forum on RTI law, investigative journalism and the fight against corruption in Ghana 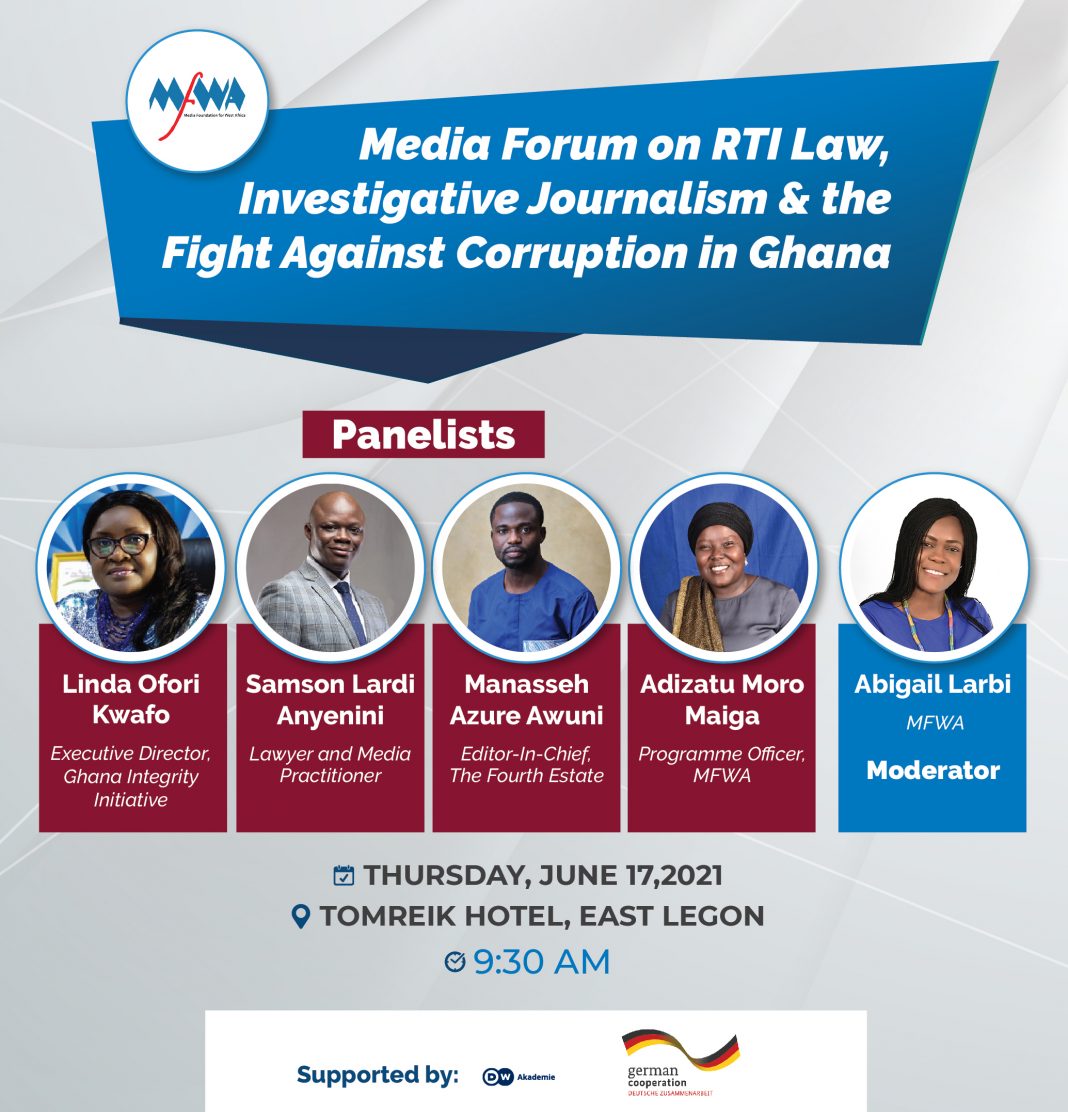 Right to Information (RTI) is a universally recognized basic human right. Globally, more than 120 countries have passed Right to Information laws with about 60% of countries in West Africa having such laws. In some countries, RTI laws are a high priority; while in others, there have been very little efforts at instituting the right measures to ensure full and efficient implementation. In many instances, citizens’ awareness of such laws and how to utilise them to access needed public information have been very minimal.

In 2019, Ghana passed the Right to Information Law, Act 989. The law is a further enabler of citizens’ enjoyment of the right to access information enshrined in Article 21(1) (f) of the 1992 Constitution of Ghana. Beyond the financial provision and the necessary structures needed to ensure efficient implementation, public sensitization and education on the law has been quite low.

For a country whose ranking on the corruption perception index has fluctuated in the last two decades until its current ranking of 75 according to the 2020 Corruption Perception Index, the RTI law provides an effective tool to demand public accountability and help fight corruption. The media, as enablers of democracy and participatory governance, also need to understand how the RTI law can advance their work towards promoting transparency and accountability.

Thus, as part of efforts to increase public awareness of the law, the Media Foundation for West Africa (MFWA) will on Thursday, June 17, 2021, hold a Media Forum under the theme: The RTI law, Investigative Journalism and the Fight Against Corruption in Ghana.

The Forum will bring together journalists, media associations, media support groups and anti-corruption CSOs to deliberate on the current state of Ghana’s RTI law since its passage in 2019. Participants will discuss more effective ways journalists can utilise the law in accessing information for their work towards improving transparency and accountability in Ghana. The Media forum will also be used to launch a Journalists’ Guidebook on RTI, produced by the MFWA in furtherance of our resolve to deepen awareness creation of the RTI Law.

The forum and Book launch form part of the MFWA’s project “Promoting Citizens Access to Information in Ghana” which is supported by German-based Deutsche Welle Akademie.

In 2019, the MFWA under the project schooled more than 60 District Chief Executives across the Northern, Ashanti, and Greater Accra regions on the RTI Law. In 2020, 122 information officers and Coordinating Directors across 56 Metropolitan, Municipal, and District Assemblies (MMDAs) in the Greater Accra, Ashanti, and Northern regions were also trained on the RTI law and what is expected of them under the law. About 100 journalists were also trained on the RTI. Currently, the MFWA has commenced a series of story development bootcamps for journalists on how to use the RTI in the development of their stories.