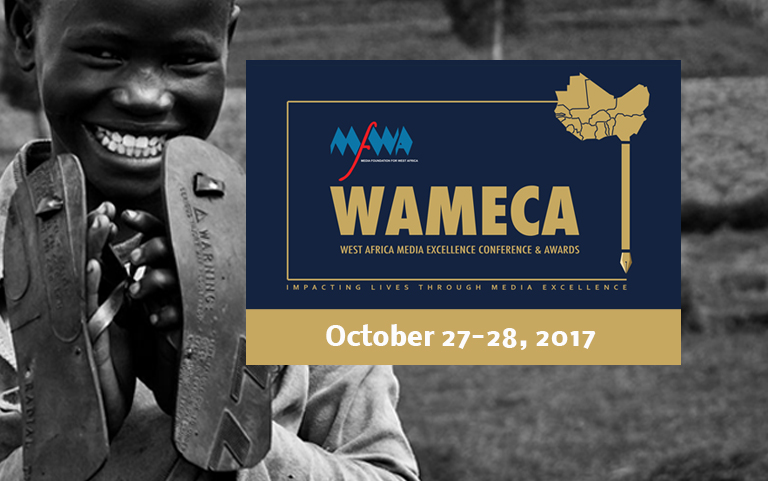 WAMECA is an initiative to reward and inspire media excellence in West Africa as well as honour West African journalists working with and for media organizations based in West Africa who have, through original work, produced compelling work(s) that has had significant impact on society.

The maiden edition of WAMECA is scheduled for October 27 and 28, 2017 and will be held in Accra, Ghana. The two-part event has a 2-day Media Conference which will bring together over 200 journalists, media experts, editors, academics, freedom of expression advocates and high profile personalities from across West Africa and beyond including all the national partner organisations of the MFWA from all 16 countries in West Africa.

Participants will also deliberate and make concrete recommendations on issues such as media sustainability; investigative journalism; media and good governance, and cyber security in West Africa.

The Awards will be held in the evening of October 28, 2017 with over 300 participants including corporate leaders, CSOs and other international organisations.

Meanwhile, Submission of entries for the Awards is opened to journalists from the Thursday, August 10 to Sunday, September 17, 2017. The Awards are opened to journalists from print, electronic and online media in Anglophone, Francophone and Lusophone countries in West Africa. Applicants must be West African, working with and for media organisation(s) based in West Africa. Entries for the awards should cover works from January 1 to December 31, 2016. Nominees for the awards will be announced on the 10th October 2017.

The Awards will recognize excellence in the following categories:

From the entries submitted, the judges will also select the overall best report for the prestigious West African Journalist of the Year Award.

The Executive Director of MFWA, Sulemana Braimah said it was important to recognise and celebrate media practitioners, whose works continue to transform society positively, hence the media excellence awards.

“I am hopeful that WAMECA will come to stay and will continue to uncover amazing journalistic talents in West Africa without which may otherwise not be recognised.” He added.

For further clarifications, please write to info[@]mfwa.org or Abigail Larbi (abigail[@]mfwa.org) or call the MFWA on +233 302 242470. You can also visit www.mfwa.org/wameca for more information on WAMECA,