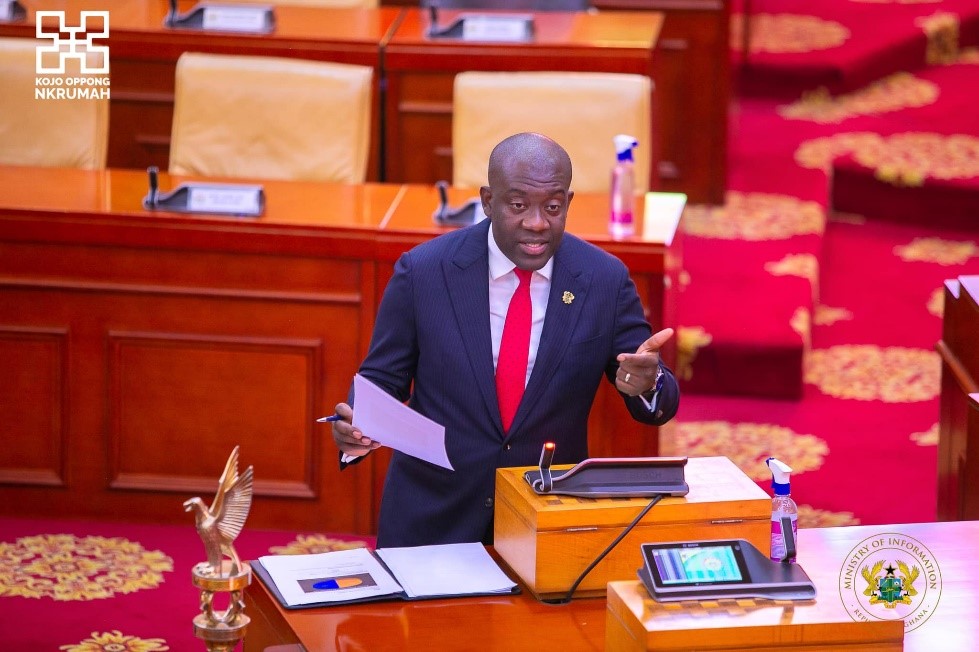 Ghana’s Minister for Information, Kojo Oppong Nkrumah, has singled out the Media Foundation for West Africa (MFWA) and its accountability journalism project, The Fourth Estate, for praise in the testing of the Right to Information (RTI) Act.

While responding to questions on the floor of Parliament on the operationalisation of the RTI law on March 15, 2022, the minister said the continuous efforts by the two entities have kept the RTI law alive.

“Let me commend the civil society organisations in particular that have made it a point to test the system for information at various ministries, departments and agencies (MMDAs), and with your permission let me mention, for example, the Media Foundation for West Africa, The Fourth Estate that have done a lot of these applications, ” the Minister said.

The Media Foundation for West Africa (MFWA) has been a leading advocate on RTI Law since the campaign for its passage commenced some two decades ago. Since the law was passed in 2019, the MFWA has trained about 200 journalists, 150 local government officials, and countless citizens on how to use the RTI law. The organization has also held a number of sensitization forums that have brought together key stakeholders of the law including the Board Chair and Executive Secretary of the RTI Commission.

Aside from sensitization and building capacities on the law including producing simplified versions of the RTI law, the MFWA also trained some citizen groups in the Ada East District Assembly in the Greater Accra Region, Sagnarigu Municipal Assembly in the Northern Region, and Ejura Sekyeredumase Municipal Assembly in the Ashanti Region. The MFWA guided members of the citizen groups to test the RTI law at the local district levels. The exercise revealed woefully low awareness and non-compliance with the law among local government authorities.

The Fourth Estate has filed petitions at the RTI Commission, the independent adjudicative body responsible for the implementation of the RTI law, on over a third of these requests after exhausting the internal appeal mechanisms within state institutions.

The passage of the RTI law (2019, Act 989) in 2019 drew commendations from many access to information stakeholders.

But it is beginning to dawn on the stakeholders that the celebrations were premature. Very few citizens are using the law and even fewer institutions are willing to release information.

This was confirmed by the Information Minister Kojo Oppong-Nkrumah. The Minister said 85 requests were made in 2020 by individuals and institutions, and 129 in 2021. He said stakeholders should request information from public institutions to make the almost 20-year activism for the act worth the cost.

Challenges with implementing the RTI law

Anti-corruption campaigners touted the law as one of the most potent arsenals to crush corruption. They said it would increase transparency in the government, ensure proactive disclosure of information and set rules for requests and responses.

But this was not to be. The Fourth Estate and the MFWA’s work have shown that state institutions do not disclose information proactively and those who request are sometimes frustrated in the process.

For instance, Manasseh Azure Awuni of The Fourth Estate made a request on Ghana’s COVID-19 expenditure on school’s fumigation to the Ministry of Education in August 2020. The ministry responded to the request in August 2021, a year after the request was made. This was after many follow-ups.

Again, given the public interest associated with the president’s use of private jet despite the availability of a presidential jet, The Fourth Estate made a request for information from the Presidency in December 2021, demanding the cost of renting the private jets.

The request also asked for the assessment report by the Ghana Armed Forces, which may have declared the presidential jet unfit for use, the reason the president had had to hire private jets.

In a response on January 19, 2022, the Chief of Staff of the President, Akosua Frema Osei-Opare commended The Fourth Estate for its use of the RTI law. She, however, said the information requested was exempt according to the RTI law.

Displeased, The Fourth Estate appealed to President Akufo-Addo for an internal review. He did not respond to the appeal, a case of the priest not implementing his own sermon.

The Fourth Estate dragged the presidency before the RTI Commission for its failure to release information to The Fourth Estate, arguing that the request relates to public interest and abuse of authority, in accordance with section 17(1)(d)(e) of the RTI law.

MFWA’s programme officer, Adiza Moro Maiga, who has been on the frontline training CSOs, journalists, and community activists on the RTI law, said the challenge has moved from having the law passed to “having it work.”

“Passing the law is not enough. The challenge is getting it running, and effective. If we don’t put in the structures to make sure it is working well and serve the purpose for which it is passed, then it becomes problematic,” she said.

In 2020, the MFWA requested information from the National Communications Authority (NCA), Ghana’s media regulator. The request was for the list of all authorized radio stations as of June 2020, and the full list of the number of radio stations closed down in 2017 during the NCA’s spectrum audit.

The NCA demanded a fee of GHS2,000 for the information.

The MFWA went to court, saying it was “convinced that the amount the NCA is demanding is prohibitive and liable to set a bad precedent and a breach of the fundamental right to access information.”

It, therefore, prayed the court to declare the NCA’s request for GHH2,000 as inconsistent with the RTI law, and that the NCA could not arbitrarily use its own law to charge fees under the RTI.

The court ruled that the regulator could not use its internal fees for requests made under the RTI law. It asked the MFWA to pay GHS 1,500 instead of the GHS 2,000 demanded by the NCA. Even though the MFWA had in principle gotten what it sought for, the organisation was not pleased with the amount prescribed by the courts.

“While we can pay the GHS1,500 fees decided by the court, it is important to underline the fact that the right to access public information under the RTI law accrues to all Ghanaians, including the lowest income earners. This precedent, can, therefore, discourage or disenable a certain class of Ghanaians from exercising this,” the MFWA registered its displeasure in the ruling.

Funding Opportunity and Awards on SDGs Reporting in Ghana, Best Story Gets GHC 10,000

Abusive Language On Radio Down By 38% In December