After Jammeh’s Gambia will Conde’s Guinea Become the New Hell for Journalism in West Africa? 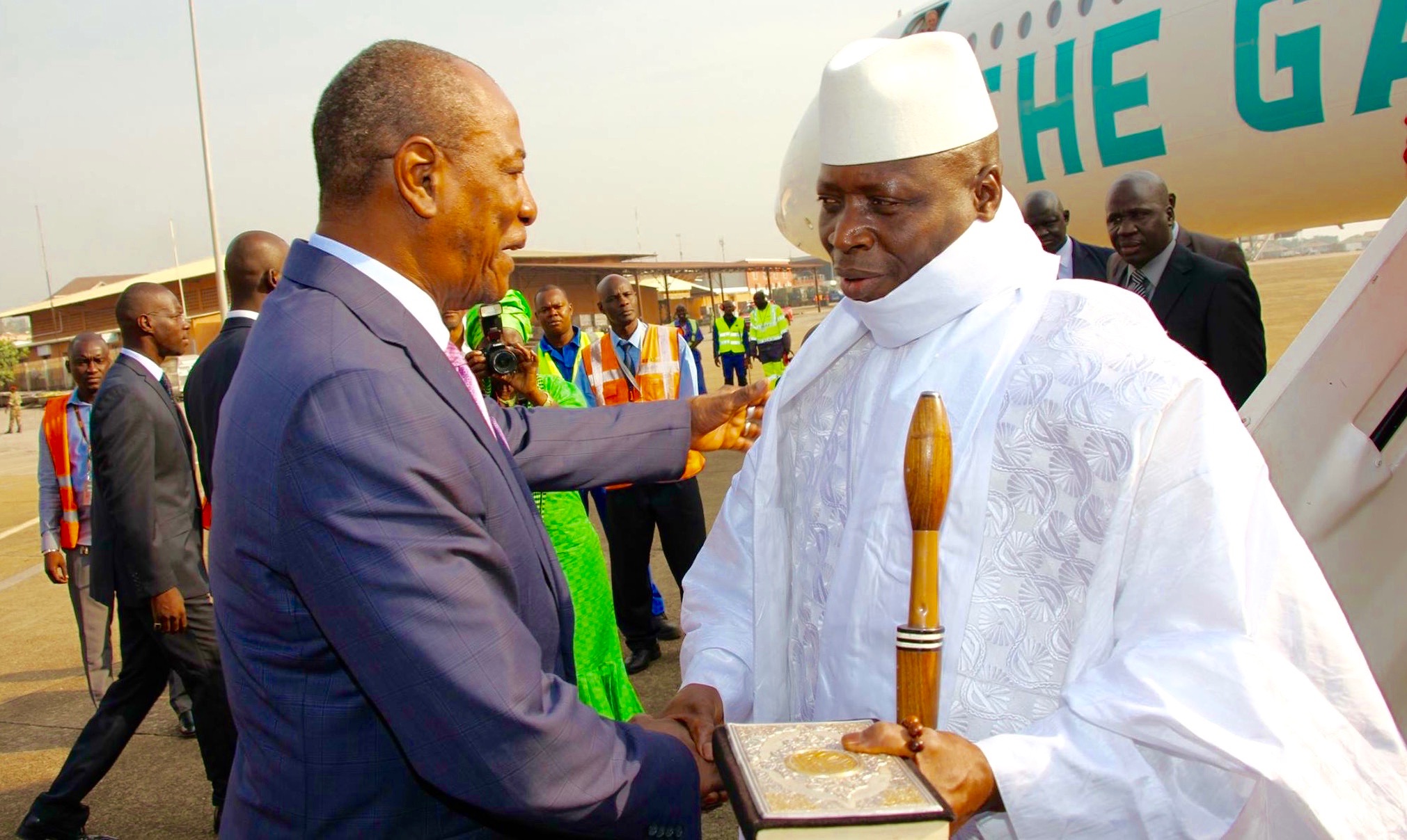 Sulemana Braimah, Executive Director of the MFWA, highlights the deteriorating state of Press Freedom in Guinea.

Until January 2017, The Gambia was the most notorious country for press freedom violations in West Africa. For 22 years, the country’s brutal dictator, Yahya Jammeh, subjected journalists and human rights activists in the country to severe abuses including enforced disappearances, torture and extra-judicial killings.

Press freedom conditions in The Gambia are steadily improving since Jammeh fled into exile on January 21, 2017 after suffering an unexpected electoral defeat in the December 1, 2016 polls and compelled by regional forces to relinquish power.

In a recent report assessing the situation in The Gambia a year after Jammeh’s exit, Vivian Affoah, a senior programme officer at the Media Foundation for West Africa (MFWA) highlighted significant and positive changes to the general freedom of expression environment in the country over the one-year period.

While the press freedom situation in The Gambia over the last one year has been refreshing and inspiring, events in Guinea have been deeply distressing. In what seems like a race to become West Africa’s next worst violator of media freedoms, President Alpha Conde’s regime is fast becoming infamous for presiding over several media rights violations.

Just like former President Jammeh, President Conde, 79, has now jumped into the business of personally issuing orders to the Guinean media on what not to publish or broadcast. In what the MFWA referred to as “Presidential Censorship,” President Conde on November 25, 2017 ordered the Guinean media not to provide coverage for or grant interviews to the Deputy Secretary General of the country’s teachers’ union, Aboubacar Soumah. The teachers had been on strike for weeks; an action President Conde described as a rebellion by the teachers’ union.

Ironically, President Conde, who took over as Chairman of the African Union in January 2017, issued his censorship order while addressing the 46th meeting of the International Union of the Francophone Press in the capital, Conakry. The President did not only issue a censorship order. Contained in the order was a threat to shut down any media outlets that will violate the censorship order.

In just two days, the President’s censorship order was enforced. A popular radio station, BTA FM, located in the city of Labe, 450 km north of Conakry, was shut down. Local gendarmes (a para-military force) stormed the premises of the radio station and shut it down on the instruction of the governor for the Labe region shortly after the station had interviewed the censored teachers’ union leader.

Journalist Alpha Oumar Fogo, who interviewed the teachers’ union leader, was together with his colleague, Mamadou Saïdou Diallo, taken to the department of national security for interrogation. The two were released after three hours following public agitation.

A day after the closure of BTA FM, 40 leading radio stations in the country, reportedly ceased broadcasting for 24 hours. The action by the radio stations was in solidarity with BTA FM and to protest the Presidential media censorship and the growing culture of repression of freedom of expression in the country.

Prior to the infamous censorship order by President Conde, there had been a series of media rights violations in the country mostly perpetrated by state agencies or officials. On October 30, 2017, the national Telecommunications Regulatory Authority (ARPT) disrupted the transmission of Radio Gangan for four days. The action followed rumours that President Condé had died, which was falsely attributed to the station.

In addition to the disruption of its transmission, the radio station’s Editor-in-Chief, his deputy and the Commercial Manager, were taken into custody by security forces on accusations of ‘spreading false rumours.’ The three were released hours later, only for the general manager of the station, Aboubacar Camara, to be arrested and detained by gendarmes the following day.

To add to the wave of violations, gendarmes beat up several journalists from across Conakry who turned up at the offices of the para military group on October 31 to show solidarity with Camara following his arrest. The equipment of many of the affected journalists were also destroyed. Following the incident, a group of journalists’ associations lodged a complaint at a court in Conakry against the Squadron of the Gendarmerie for the assault on the journalists. The case is yet to be heard.

Three days after Camara’s arrest, (November 3), the media regulatory body, Haute Autorité de la Communication (HAC), suspended Espace FM and all its relay outlets across the country for one week. The suspension followed a discussion on the radio station about the poor state of military garrisons in the country.

In connection with the same broadcast, Moussa Moïse Sylla, General Manager of Espace TV, who was a discussant on the radio programme, was on November 15, formally charged with “divulging military secrets.” Judgment for the case has been set for December 25, 2017.

Earlier in August, a journalist with one of the most influential news websites in the country www.aminata.com was attacked by political party supporters while another was unlawfully detained by a police officer who forced him to delete his recordings. The Management of the publication later issued a statement complaining of lack of redress for acts of aggression suffered by its reporters, despite formal complaints to the authorities.

As the violations multiplied, President Alpha Conde came out to express ‘deep concern.’ But in what turned out as a shock to the media and freedom of expression advocates, the President rather complained that public reactions to the violations were exaggerated. “As soon as a journalist is arrested, hell breaks loose,” President Conde said. “Meanwhile, in the countries considered to be democratic, journalists are arrested every day and nobody says anything.” This controversial remark was the prelude to his censorship order on the teachers’ union leader.

In the first quarter of 2017, the MFWA reported in its quarterly report titled West Africa Free Expression Monitor, five incidents of press freedom violations including a crackdown on student demonstrators resulting in seven deaths, two cases of physical attacks, one incident of arbitrary detention and one incident of interrogation.

The unending spate of press freedom violations has attracted the attention of not only the media community in the country. Civil society is beginning to speak up about the problem. Head of the coalition of civil society organisations in Guinea, Dr. Dassa Koroma, recently condemned the rampant attacks on journalists and other forms of media rights violations and urged the media and civil society community in the country to stand up and defend press freedom.

Guinea, one of Africa’s poorest countries that was hit by the recent deadly Ebola epidemic, has traditionally had a repressive press freedom environment. In the 2017 edition of the global freedom of the Press index by the US-based media rights group, Freedom House, Guinea and The Gambia were the two countries in West whose press freedom was rated as “not free.” The Island country of Cape Verde was rated as having a “free” media environment while the rest of the countries in the region were rated as having a “partly free” media landscape.

The transitional government which returned Guinea to democracy in 2010 after recent military interventions, passed Law /2010/002/CNT of June 22, 2010 to decriminalise press offenses as well as give citizens a legal right to information with the adoption of a Right to Information Law /2010/ 004/ CNT/.

Hopes were high when President Conde assumed the leadership of Guinea in 2010 after winning in a tightly-contested and contentious election. Conde became the country’s first freely elected leader and promised to strengthen democracy in the country.

On the evidence of the press freedom violations enumerated above, one can say that the Guinean authorities have failed to practically deliver on the good intentions of the transitional administration with regard to press freedom and democratic accountability. Now in his second five-year term, which ends in 2020, President Conde’s regime is viewed by many as one that has further worsened the state of press freedom in the country.

Over the years, there has been relatively limited press freedom advocacy and media development support initiatives by international organisations in Guinea. The local media advocacy groups in the country have also been quite fragmented and weak.

Guinea has been one of the most troubled countries in the region and obviously one of the countries requiring urgent support for democratic strengthening and consolidation. A stronger, independent media is one of the critical requirements for improving governance in Guinea. It is, therefore, crucial for regional and international media support groups to put Guinea on the front burner for media rights advocacy and media development support ahead of the country’s 2020 elections. Guinea must not be allowed to become a hell for journalism in West Africa.