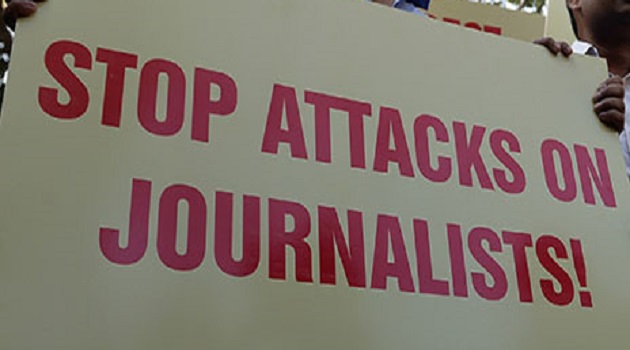 Two journalists have been attacked in two separate incidents in what the MFWA considers a safety of journalists red flag ahead of the December 2020 polls.

On June 20, 2020, some political party thugs assaulted journalist Macbadara Romanus of Tizaa FM in the North East Regional capital, Nalerigu, while he was covering the primaries of the ruling New Patriotic Party (NPP).

During voting some altercation erupted between the NPP Regional Chairman, Nurudeen Fuseini, and an agent of Dr Mohammed Sampah, who was contesting Hajia Alima Mahama, the incumbent Member of Parliament of Nalerigu and Local Government and Rural Development Minister.

Macdabara told the MFWA that, the Municipal Chief Executive of Sagnarigu, Mariam Iddrisu accused him of filming the scuffle and ordered some thugs to seize his phone. The MCE had come to Nalerigu to support the incumbent. According to the journalist, the MCE’s order was immediately carried out by the thugs who kicked and punched him after shoving him to the ground.

“I felt pains in my jaw and then around my neck, so I have to rush to the hospital for medical care. I got there and I was asked to go back to get police form before they can treat me,” the reporter said.

He said his phone was returned to him following the intervention of the NPP Regional Communications Director, Amos Walibe, but only after all recordings had been deleted.

North East Regional Police Commander, DCOP Charles Domanban, confirmed to the MFWA that the incident has been reported to his outfit, adding that it is being investigated.

In the second incident, journalist Abraham Ananpansah with PAD FM in Damango, in the Savanah Region was ambushed and attacked for reporting on an incident of violence at a registration centre.

Ananpansah who doubles as the Assemblyman in the Canteen Electoral Area, reported on July 2, 2020, that one Atabia Anoma Rahim, Deputy Organiser of the NPP attacked an observer for the opposition National Democratic Congress (NDC) with a stool at a registration centre.

“Minutes after my follow-up report, I got a call from a strange number who identified himself as Anoma Atabia Rahim. All I could hear was,” When I catch you, I will deal mercilessly with you,” Ananpansah said. The threat was carried out four days later by seven men led by Atabia.

“All eight of them surrounded me and he Atabia hit my head with a stone and the rest started hitting me with sticks and other hard materials. I became helpless until onlookers intervened and assisted me to escape for my life,” the journalist narrated.

The journalist told the MFWA he reported the threats to the police after three people confirmed that Atabia had openly sworn at the registration centre to “deal with him.”

Atabia has been charged and was supposed to appear in court on July 28. However, the Regional Police Command met the journalist, the management of PAD FM and Rahim Atabia that same day to try to mediate the case.

The violent scenes that were recorded at various polling centres during the NPP parliamentary primaries and similar incidents being enacted at various places during the ongoing voter registration exercise have created an atmosphere of insecurity that could prove hostile to the media if carried into the December 2020 elections. These two incidents of assault on journalists Macdabara and Ananpansah during the NPP primaries and the registration exercise respectively, can intimidate other journalists to self-censor.

They constitute a violation of the right of the journalists to exercise their profession freely without any interference as guaranteed by Chapter 12 of Ghana’s constitution.  The acts of thuggery also infringe the Vigilantism and Related Offences Act 2019, which bans acts of vigilantism in Ghana, disbands vigilante groups, including political party vigilante groups.

The MFWA therefore condemns these attacks and call on the police to ensure that journalists are protected in the course of their coverage of public events including the electoral process. The police must also deal resolutely with all acts of election-related violence by arresting and ensuring the prosecution of the perpetrators. We urge all the political parties to educate their supporters to eschew violence in all forms, particularly against journalists, and to appreciate the role of the media in the electoral process.