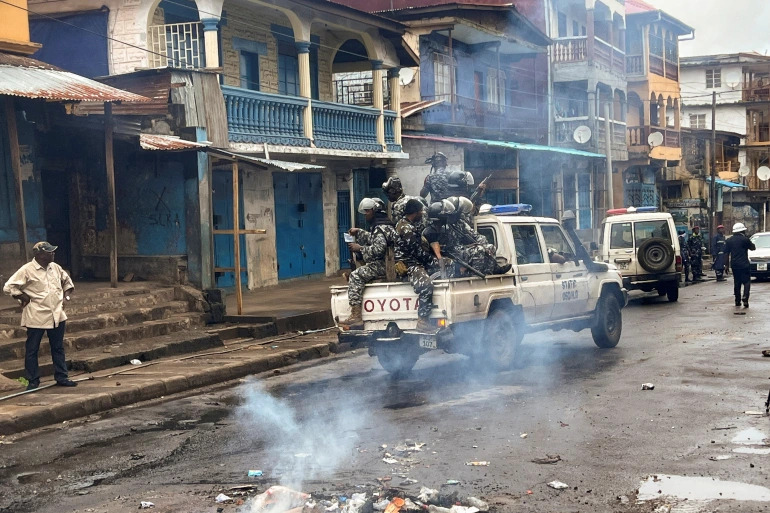 A number of people have been killed, including at least two protesters, the internet disrupted and a curfew imposed as anti-government protests in Sierra Leone plunged the country into grief and chaos on August 10, 2022.

The opposition called the protests to vent anger over what they (opposition) described as unbearable economic hardships, high inflation, endemic corruption and abuse of power. Two days earlier (August 8), a call on citizens to remain indoors as part of the expression of discontent was largely obeyed as the streets were deserted, and markets, shops and schools closed to turn the capital Freetown into a ghost city.

A street march protest on Wednesday, August 10, however, went horribly wrong as security forces clashed with protesters in a bloody confrontation. Youths burnt piles of tyres on the streets while others threw stones at the police. The situation soon went out of control with the police firing life bullets. Media reports initially said three people were killed, among them a police officer who was allegedly lynched.

The government imposed a curfew to prevent the protests from travelling into the night and stem the violence starting from 15:00 hours GMT.

In a further move to frustrate further mobilization and restrict the circulation on social media of images of the mayhem, the government shut down the internet. The global internet observatory, NetBlocks, confirmed the shutdown. NetBlocks metrics confirm a nationwide disruption to internet service on multiple providers across Sierra Leone from the morning of Wednesday 10 August 2022. Internet was cut for two hours at noon, and then again overnight, amid reports of protests and clashes between the police and protesters in capital city Freetown and other areas.

A Freetown-based journalist, Ishmael Sallieu Koromo, told the Media Foundation for West Africa (MFWA) that the shutdown lasted into the early hours of Thursday.

“I could not access the internet from my phone in the small hours of this morning, but I got the connection around daybreak, so I can confirm the internet has been restored,” the journalist said in a telephone chat.

The Media and Public Relations Department of the Police have confirmed in a statement that “Four police officers died and four were injured nationwide; 113 suspects were arrested for both North-West and North-East Regions as of now; some public and private property destroyed”. The statement that the Media Foundation for West Africa (MFWA) has sighted was however silent on civilian deaths.

The MFWA condemns the violence from both sides that marred the protest and demand an official probe into the incidents in order to ensure justice and recommend measures to forestall future occurrence. We urge the Sierra Leonean authorities to continue to build the capacity of the police in crowd control in line with the UN-sanctioned Basic Principles on the Use of Force and Firearms by Law Enforcement Officials. These principles, among others, urge governments and law enforcement agencies to develop non-lethal incapacitating weapons for use in appropriate situations.

It is regrettable that this chaotic and repressive response to protests is the second in Sierra Leone in only one month.

On July 4, 2022, the police assaulted and arrested dozens of women in a crackdown on their protest against rising cost of living.

Several videos posted on social media showed women being beaten and molested in police stations by male police officers. One police officer was heard taunting a detainee “Now you will rot behind bars”.

Later that same day the police arrested Dr Femi Claudius Cole, leader of the Unity Party on accusation of inciting an illegal protest. She was detained overnight alongside the Chairman of the National Grand Coalition party, Dr Dennis Bright, who had gone to the police station to show solidarity.

It is clear from the above, that the Sierra Leonean authorities are becoming too jittery over, and intolerant of public protests.

#WPFD22: Let’s work together to fight digital persecution of journalists