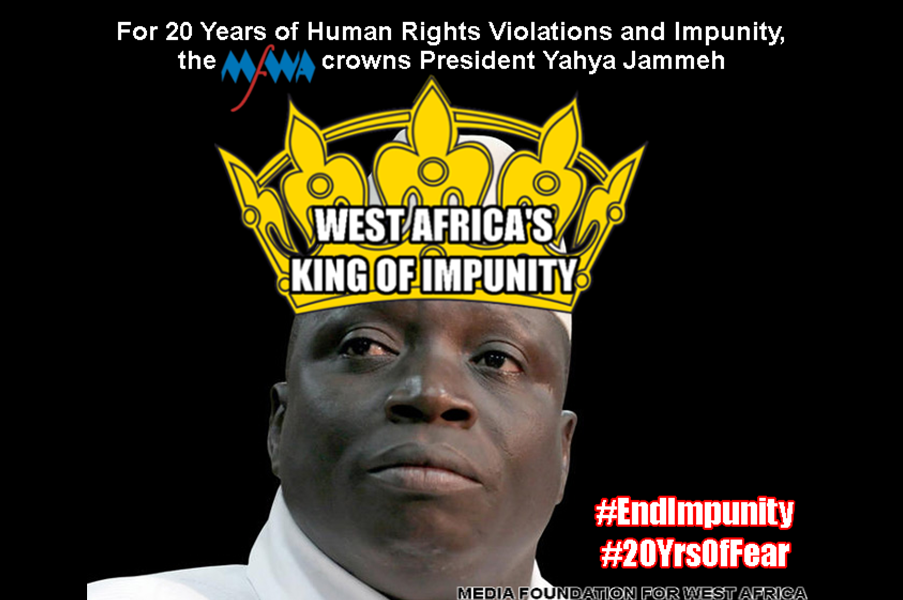 The Media Foundation for West Africa (MFWA) has named the President of The Gambia, Yahya Jammeh, ‘West Africa’s King of Impunity.’ The MFWA bestows this title upon President Jammeh as a result of his 20-year-long rule of fear, characterized by gross human rights violations, disregard for the rule of law and on-going impunity for egregious rights violations in The Gambia.

This crowning marks the climax of the MFWA’s campaign to end impunity in The Gambia, which began on the first anniversary of the United Nations International Day to End Impunity for Crimes against Journalists, observed on November 2.

President Jammeh is a man of many titles, and he is officially addressed as His Excellency Sheikh Professor Alhaji Dr. Yahya Abdul-Azziz Jemus Junkung Jammeh Babili Mansa. But none of his self-conferred titles reflect his status as the greatest violator of human rights and perpetrator of impunity in West Africa.

“In the past six years, the ECOWAS Community Court of Justice issued three judgments against The Gambia for its failure to exercise due diligence in investigating allegations of torture, enforced disappearances and extrajudicial killings,” said Sulemana Braimah, Executive Director of the MFWA. “The Jammeh government has flagrantly ignored the judgments of the Court and has blatantly refused to compensate victims as directed by the Court.”

The Gambia is a State Party to several human rights treaties, including the International Covenant on Civil and Political Rights and the African Charter on Human and Peoples’ Rights. It has also signed the Convention against Torture and Other Cruel, Inhuman or Degrading Treatment or Punishment. While The Gambia is not bound by the Convention against Torture, it must refrain from committing acts that would defeat the object and purpose of this treaty. In spite of these human rights commitments, systematic human rights violations and impunity for human rights violations have been the hallmark of the last two decades in The Gambia under President Jammeh.

The most recent decision of the ECOWAS Court, issued in June, found  that the Jammeh government’s actions in perpetrating abuses and its inaction in providing effective remedies has resulted in the culture of impunity in The Gambia today.

The MFWA calls on governments in West Africa, the ECOWAS, the African Union and the United Nations to help combat this enormous problem and pressure the Jammeh government to adhere to the rule of law and fulfil its regional and international human rights treaty obligations.