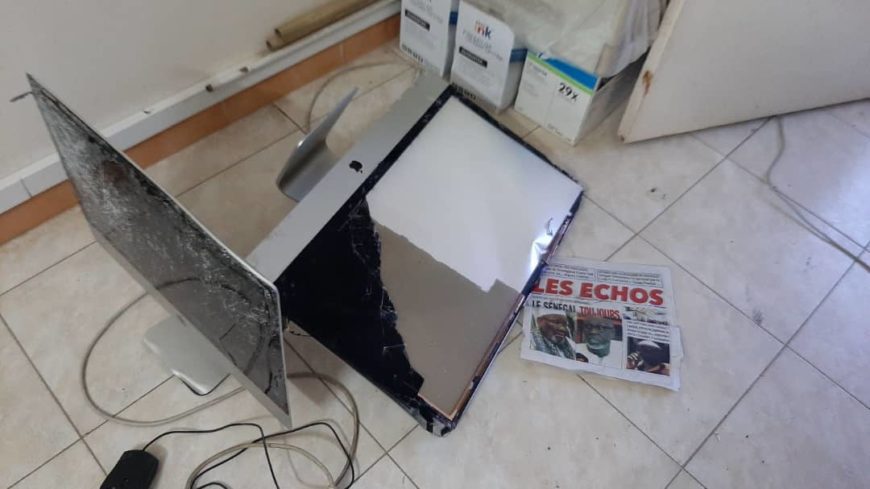 A group of religious fanatics have vandalized the offices of the Senegalese daily, Les Echos in Dakar, causing extensive damage to property.

The attack which occurred on the afternoon of August 3, 2020 followed a publication by the newspaper that an influential religious leader, Serigne Moustapha Sy, had tested positive for COVID-19 and was on admission at Dakar’s main hospital.

The thugs who identified themselves as followers of Moustapha Sy and adherents of the Moustarchidines sect that he leads, smashed window screens and destroyed equipment including computers.

“Six computers were broken, plus the flat-screen TV in my office, my equipment and that of the editor were broken. On their arrival, they introduced themselves as disciples of Serigne Moustapha Sy, a religious leader,” the Editor-in-Chief of the newspaper, Mbaye Thiandoum, told the local media.

The attack, according to Sidy Djimby Ndao, a senior Journalist and Editor -in-Chief of the online version of the newspaper, has severely affected their capacity to operate.

“The newspaper continues to be published, but with extreme difficulty. The journalists write with their smartphones. Management decided to continue publishing because there is no question conceding to the aggressors,” Ndao told the MFWA.

The act has been strongly condemned by almost all media organisations, leading journalists and several influential individuals in Senegal. The Minister of Culture and Communication, Abdoulaye Diop issued a statement to express his  indignation.

“While expressing my total solidarity with the Director of the publication and the workers, I strongly condemn such violations which do not honour their perpetrators and which can in no way be tolerated. The Rule of law prevails in Senegal where press freedom is a fundamental right enshrined in the Constitution,” the Minister said, assuring that the matter will be followed to its logical conclusion.

The Association of Editors and Professionals of the Online Press (APPEL) also called on the media fraternity in Senegal “to stand up to denounce this barbarism, and urges especially that the perpetrators be tracked down and severely punished.”

Meanwhile, the gendarmerie has announced the arrest of six people who they say are being questioned in connection with the attack.

This act of aggression comes two months after a group of people protesting against restrictive COVID-19 measures, attacked the headquarters of RFM Radio based in Mbacké, 198 km from Dakar. The attack, which occurred on June 2, 2020, resulted in damage to several equipment of the radio station which belongs to the famous singer and former minister, Youssou N’Dour.

It is also the third incident related to the COVID-19. On March 25, 2020, a police officer assaulted Awa Ndiaye and Ousseynou Mbodj from Touba TV despite having authorization to report on how a curfew to contain the spread of the virus was being observed.

Senegal is widely respected as a country with a strong democratic tradition which respects press freedom. These recent attacks on the media by extremist elements is therefore quite disturbing. Consequently, the MFWA condemns the attack on Les Echos and urges the authorities to ensure that the perpetrators face the full rigours of the law, including paying for the equipment and all other items they destroyed at the premises of the newspaper. We further call on all media stakeholders in Senegal to treat these violations as an emerging threat to press freedom and take measures to curb it.