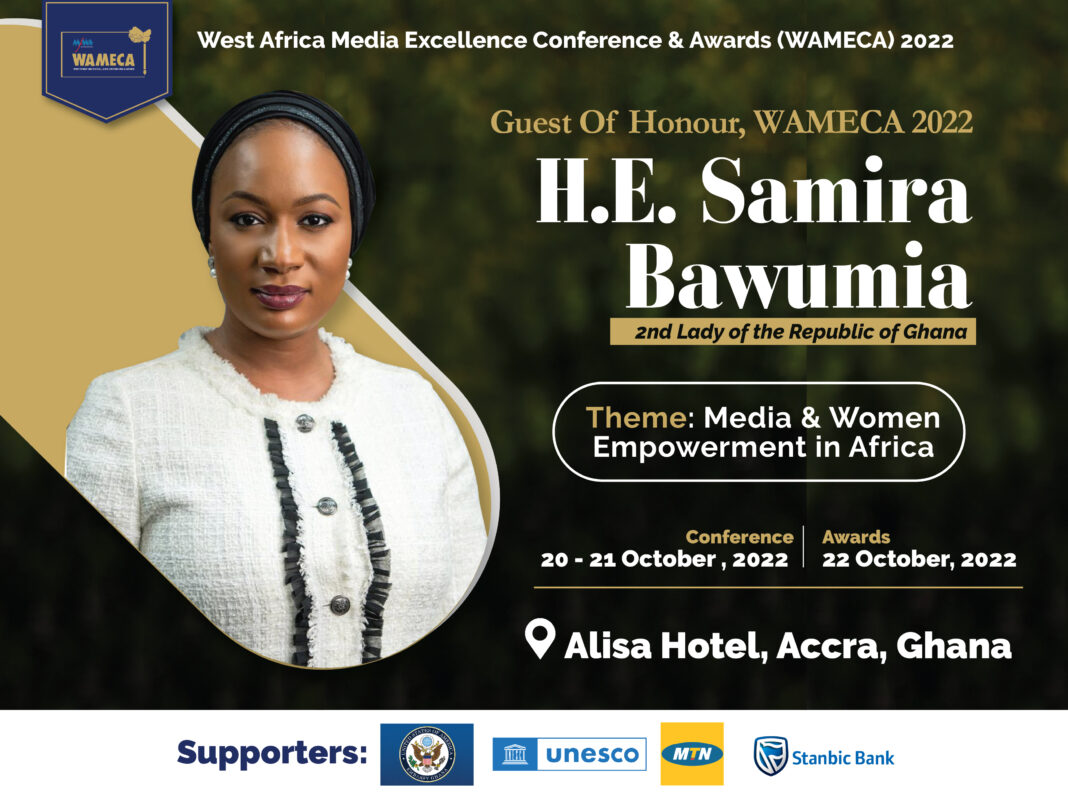 Her Excellency Mrs. Samira Bawumia, the Second Lady of the Republic of Ghana, will be the guest of honour at this year’s edition of the West Africa Media Excellence Conference and Awards (WAMECA).

Mrs. Bawumia brings grace to WAMECA 2022 with her profile as an accomplished woman and role model. She makes for an excellent guest of honour for the conference which is focusing on women and young girls through the media.

Since 2017, when Mrs Bawumia became the Second Lady of Ghana, she has dedicated a considerable part of her work to transforming women’s and young girls’ lives. The height of her transformation agenda is the founding of the Samira Empowerment and Humanitarian Projects (SEHP). The SEHP is a non-profit organisation that focuses on Health, Education, Gender Parity and Women’s Empowerment, as well as Entrepreneurial Development.

As Guest of Honour at this year’s WAMECA, H.E. Hajia Samira Bawumia will officially open the conference and deliver a speech on the governing theme for the conference– ‘Media and Women Empowerment in Africa.’

WAMECA 2022 will be a three-day event that will be held at the Alisa Hotel in Accra from October 20 to October 22. It will be the sixth edition of West Africa’s biggest journalism event.

The conference will host more than 300 participants from West Africa and beyond, virtually and in person.

As a platform, WAMECA brings together stakeholders from government, media, civil society, academia and the general public each year to deliberate on key challenges to media development and explore ways to support the media to promote good governance, regional integration and peace in West Africa. The Awards ceremony held each year (after the Conference) honours West African journalists who have produced compelling works that have significantly impacted society.

Last year, guests and participants of WAMECA discussed the phenomenon of “Misinformation, Digital Media Regulation and Journalism in Africa”. This was necessitated by a trend of legislation in Africa that tend to strengthen state control over citizens’ use of the internet, online communication outlets and digital media platforms including social media platforms. Famous West African lawyer, Femi Falana, was the Special Guest of honour.

In 2020, WAMECA deliberated on the future of journalism in the wake of the Coronavirus disease (COVID-19) pandemic. The WAMECA 2020 hosted many prominent personalities including the Senior Editor, Africa TV and Media Management Executive of the British Broadcasting Corporation (BBC), Vera Kwakwofi and George Sarpong, Executive Secretary of Ghana’s National Media Commission and underscored the need for the media to engage in research and advocacy, adding that public education and robust interrogation should be the journalist’s role, especially during the COVID-19 pandemic. The event also hosted His Excellency Abdourahmane Diallo, UNESCO Country Representative in Ghana, as the Special Guest.

In the year prior (2019), WAMECA sought antidotes to the phenomenon of “Social Media, Fake News and Elections in Africa”. It was a healthy discourse ahead of 2020 when at least 25 countries on the continent were headed for the elections. The event hosted Chairpersons of the elections management bodies of Ghana and Burkina Faso, top state security officers in some countries in West Africa and a representative from social media giant, Facebook. The Guest of Honour, was Pansy Tlakula, Chairperson of the Information Regulator of South Africa and past Chair of the African Commission on Human and Peoples Rights. Others included Jean Mensah, Chairperson of the Electoral Commission of Ghana, Ahmed Newton Barry, Chairperson of the Electoral Commission of Burkina Faso and the Minister of Information, Kojo Oppong Nkrumah, Oyedapo Oyekunle “Dapo” Olorunyomi.

Further back in 2018, participants at WAMECA deliberated on “Media Development, Financing and Sustainability” necessitated by the fact that the industry was battling the combined effects of poor standards, repression of media freedoms, weak economies and absence of contextually relevant media management data, which had culminated in a serious challenge of sustainability for many media organisations in West Africa. His Excellency Ibn Chambas, the United Nations Special Representative of the Secretary-General for West Africa and the Sahel, and head of the UN Office in West Africa (UNOWAS) graced the occasion.

The most exciting perhaps of all was the maiden edition in 2017 which certainly set WAMECA off to a good start with a strong and bold showing by the MFWA. It focused on four key thematic areas including promoting the safety of journalists and countering impunity for crimes against journalists and the media, democratic transitions and accountable Governance in West Africa. That also marked the 20th anniversary of the MFWA.

This year’s WAMECA is being organised with support from the US Embassy Ghana; MTN-Ghana; STANBIC Bank Ghana, and UNESCO- Ghana.