Right to protest in serious jeopardy in Guinea 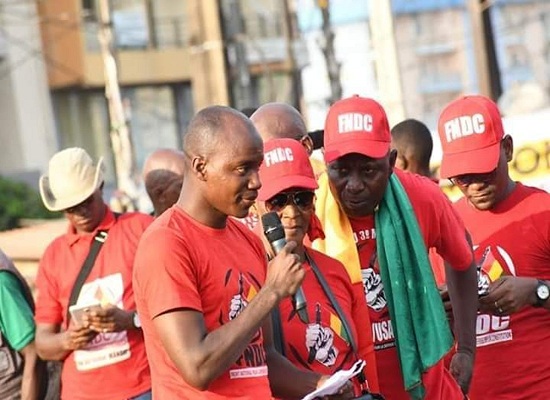 The authorities in Guinea officially dissolved the National Front for the Defence of the Constitution (Front National pour la Défense de la Constitution, FNDC), the country’s most influential pressure group which is a coalition of political parties, trade unions and civil society organisations.

“The de facto group known as the National Front for the Defence of the Constitution is disbanded,” Mory Condé, Minister of local government and rural development (Ministre de l’Administration du Territoire et de la Décentralisation), announced in a statement signed on August 6, 2022.

The statement said the FNDC is not a registered non-governmental organisation in Guinea and accused the group of inciting violence.

“Considering that since its creation on October 14, 2019 to, as it claims, protest against the possible amendment of the 2010 Constitution, the de facto movement known as the National Front for the Defence of the Constitution has always been characterized by violence against people, damaging and destruction of public and private property, acts of incitement to hatred or discrimination against people based on their origin or ideology.

“What is worse, this de facto group, through its activities, provokes armed demonstrations on public roads and public spaces, behaving like a combat group or private militia. Furthermore, that this group uses social networks to propagate its ideas and actions.

The disbandment was announced a week after the FNDC filed a complaint against the military authorities in Guinea for human rights violations. In the note sent to the International Criminal Court on August 1, 2022, the FNDC demanded, among other things, that the president, Colonel Mamadi Doumbouya, five ministers and those responsible for security and national defence, be held accountable for the bloody repression and human rights violations taking place in Guinea.

The FNDC was formed in April 2019 primarily to organise a campaign of mass opposition to President Alpha Conde’s third term bid. As its name suggests, the group purposes itself as a defender of the Guinean constitution. They have fiercely opposed the recent announcement by the military government to restore constitutional order only after three years. The political pressure group, which had initially welcomed the new junta, has held a number of meetings and demonstrations to demand a shorter transition period and a calendar for early elections. It seems that these actions signalled the end of the honeymoon period between the junta and the FNDC.

Since the beginning of July, Guinea has witnessed a rise in political tension characterised by the harassment and arrest of critical and dissenting voices, bans and violent repression of demonstrations and popular gatherings.

For instance, from July 18 to 19, 2022, at least four people lost their lives in a deadly repression of demonstrators by law enforcement officials in Conakry, the capital city of Guinea.  Similarly, from July 28 to 30, 2022, the capital was again the scene of demonstrations marred by a series of violent incidents, arrests and detentions by law enforcement officials. The latter reportedly used tear gas and fired live ammunition at demonstrators who brandished stones. The clashes reportedly caused at least four deaths and several bullet wounds among civilians.  The police reported a dozen wounded in their ranks and the arrest of more than 80 civilians.

Lawsuits were initiated the previous day against the two leaders of the FNDC and Saikou Yaya Barry, on charges of “criminal participation in a prohibited gathering, public order disturbance, destruction of public and private property, arson, looting and assault and battery.”

It was not the first time that some of the arrested activists had been in trouble with the authorities in the month of July. On July 5, 2022, during a press conference at the FNDC headquarters on Guinea’s socio-political news, the Brigade de répression du banditisme (BRB) brutally arrested Oumar Sylla of the FNDC, Billo Bah, head of the youth wing of TLP-Guinea, and Djanii Alpha, artist and head of the promotion of active citizenship at the FNDC. The BRB officers, who did not go easy on their victims, assaulted, dragged them by force and roughed them up before throwing them into the back of their vehicle.

The three activists were arrested and detained without any warrant or prior summons.  Oumar Sylla and Billo Bah reportedly learned later that Prosecutor General Charles Wright had filed a case against them on July 4, 2022 for insulting members of the National Transitional Council on social networks. They were released on July 8, 2022.

The witch-hunt and violent repression of demonstrations by the police were perpetrated on the basis of a formal ban on demonstrations in public spaces by the junta.

“The CNRD invites all political and social actors to confine any form of demonstration or gathering of a political nature to the headquarters of their organisations. All demonstrations on the public roads, likely to compromise social peace and the proper implementation of the activities contained in the roadmap, are prohibited for the time being until the election campaign periods,” the National Rally Committee for Development (CNRD) had  declared on May 13, 2022.

Several failed advocacy efforts on the part of the international community followed. The ruling junta has stuck to its decision, rejecting in particular the United Nations’ call to lift the ban on political demonstrations.

“As soldiers, we are very committed to our word. We have taken stock of all the experiences that have not worked in our country and we really do not want to repeat the mistakes of the past. That is why we are determined to make sure that things are inclusive,” said the president of the transition, Mamadi Doumbouya, in an exclusive interview with France 24 and RFI published on November 15, 2021.

In complete contradiction to those assurances however, the government of Colonel Doumbouya has embarked on the same path of intolerance, cynicism and repression as its predecessors. Ironically, it is outlawing the FNDC, which the deposed President Conde tolerated, despite the claim that the organisation was not registered. Granted that this claim is true, it is curious that the FNDC is the only organisation to have been sanctioned after the audit.

“The current situation in Guinea is a betrayal of the assurances given by the military junta. Indeed, the latter, after taking power, had multiplied gestures of peace towards the population. It even announced the setting up of a toll-free number for all mobile phone operators to enable the population to denounce abuses committed by the defence and security forces. The latest undemocratic actions of the junta are a great disappointment to the hopes of the people,” lamented Muheeb Saeed, Freedom of Expression Programme Manager at the Media Foundation for West Africa (MFWA).

The MFWA is deeply saddened by the departure of the ruling junta from the initial promises and actions that were widely acclaimed and welcomed. As a result, many questions arise as to the ruling junta’s commitments to rebuilding the foundation for a revitalised and more democratic Guinea.

We urge the ruling junta to ensure that the fundamental rights and freedoms of citizens are respected. In this respect, all activists arrested for engaging in political protests should be released. Furthermore, we strongly recommend the establishment of a framework for inclusive dialogue that will contribute to a participatory, peaceful and democratic transition. This will further demonstrate the government’s commitment to the restoration of democracy, constitutional order and a rapid return to civilian rule.