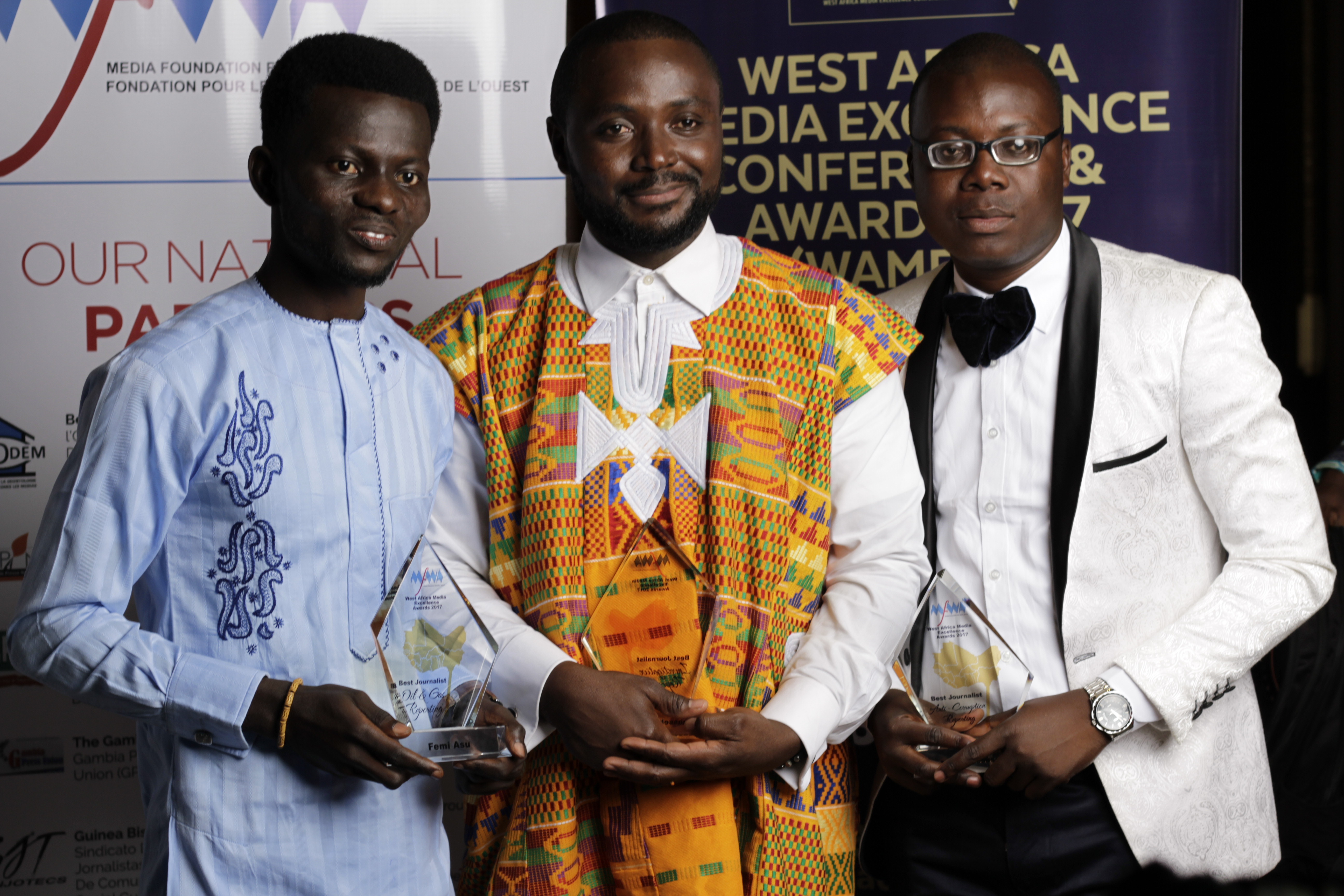 In early 2018, the Media Foundation for West Africa (MFWA) reached out to the award-winning Togolese journalist, Fousseni Saibou, for his views on the West Africa Media Excellence Conference and Awards (WAMECA).

Having won the best journalist for health reporting at the first edition of the WAMECA with his story that detailed the corruption, thievery and negligence undermining the health system in Togo, Saibou who works with Radio Kanal in Lome was particularly delighted.

In his view, opportunities to reward hardworking journalists in many Francophone African countries are limited. WAMECA had strengthened his commitment to journalism of impact.

“This WAMECA award is, for me, a consecration,” he said. “This confirms to me that we can go far and that we can change the world through journalism.”

Jesusegun Alagbe of the Punch Newspaper in Nigeria whose exposé on lecturers having sex with students in exchange for grades in a Federal Polytechnic had been adjudged best anti-corruption story at the WAMECA also reflected on the motivation the award had given him when contacted.

“Journalism is about making change, about correcting the ills in society. The award has boosted my morale and confirmed my belief that good stories will always be recognised,” he said.

The MFWA, as part of preparations for the second edition of the WAMECA which is scheduled for October 12-13, 2018, reached out to some finalists and winners of the previous year’s (2017) event for their views. Many of them, like Saibou and Alagbe, shared fond memories of great inspiration the award offered them.

After over two decades of advocating for freedom of expression and initiating various interventions to foster media development in the West African, the MFWA birthed the idea of WAMECA to honour journalists whose works were impacting society. The WAMECA was also to bring together key media stakeholders in the region and beyond to deliberate on improving media practice.

West Africa is characterised by governmental corruption, embezzlement of funds and gross mismanagement of resources coupled with hostile policies targeted at freedom of expression and media independence. Therefore journalists who brave the storm to tell stories that have significant impact on their societies need not only be commended but also be fortified to continue to do so. The WAMECA set out to achieve this objective.

The MFWA drew on the support of its stakeholders including partner organisations and correspondence across the 16 West African countries to roll out the event.

Inaugural Edition of the WAMECA

In 2017, the MFWA started the first edition of the WAMECA event. The Foundation experienced the usual challenges that characterize international events: inadequate corporate sponsorship, expensive media partnerships and varying contingencies. But these challenges were to be overshadowed by the enormous entries and enthusiasm from journalists across the region. In all, over 400 entries were received from 12 countries.

On October 27, 2017, journalists, editors, media experts and free expression advocates across the world met at the Movenpick Ambassador Hotel in Accra to identify the challenges in the media and strategise for development.  Six journalists whose works were pronounced the best by three experienced judges received honours of high recognition, plaques and attractive cash prizes on October 28, 2017.

Manasseh Azure Awuni of Multimedia Broadcasting Group in Ghana was adjudged the best reporter for the investigative reporting. Femi Asu and Jesusegun Alagbe both from the PUNCH Newspaper in Nigeria won the Best Reporter for Oil and Gas Reporting and Best Journalist in the Anti-Corruption Reporting respectively while Sheila Williams of the Business Day Newspaper in Ghana won the best reporter for the ECOWAS and Regional Integration reporting.

The winners of the awards were offered opportunities to enhance their capacity to continue making positive changes in society through journalism. At the 2018 World Press Freedom Celebrations held in Ghana, they were invited by the MFWA to participate in a series of programmes organised by the foundation and to partake in the capacity building engagements the celebrations afforded.

The winners continue to have both local and international opportunities to hone their craft into producing more quality works of journalism.

So when the MFWA contacted some of the winners for their views on the first edition of WAMECA in preparation for the next one, it wasn’t only Fousseni Saibou and Jesussegun Alagbe who were full of praises. Femi Asu, the best reporter for the oil and gas reporting, also raved about the WAMECA . The award had bolstered his confidence in the impact of journalism.

“The award has reinforced my belief that journalism can be rewarding if one does it with excellence and commitment to impact society positively,” Femi said.

Following the success of the inaugural edition of the WAMECA, preparations for the second edition started in May 2018 with the opening of entries. By the end of June when entries closed, the MFWA had received over 600 stories of impact from 12 West African countries, nearly a 50% increase in entries compared with the previous year. These stories came from 250 journalists from about 150 media houses across West Africa.