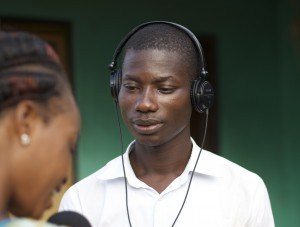 Maxwell Suuk was assaulted by the police. Photo credit: jhr.ca

The Ghana Police Service must investigate the reported attack on a reporter of Accra-based Citi FM by police officers and bring the perpetrators to book.

Maxwell Suuk reported to the Ghana Journalists Association (GJA), chapter in Tamale, capital of the Northern Region of Ghana, that he was on August 6, 2019, attacked by armed policemen at the trial of the suspected killer of police woman, Lance Corporal Agartha Nana Nabin.

“I had informed the acting Registrar my intentions to film the suspects when they are coming out from the courtroom which the acting registrar agreed. But when the police noticed that I was taking the video, they seized the phone and for about forty minutes later, one of them Emmanuel Asare, (I understand is the prosecutor) deleted the videos,” Suuk narrated.

This the second time in about a month that reporters from Omni Media, operators of Citi FM and Citi TV, have been attacked in the line of duty.

On July 5, some staff of the national Identification Authority (NIA) assaulted Edward Twum, A cameraman from Accra-based Citi TV. Twum was filming frustrated applicants while his colleague, Elvis Washington was interviewing them when some NIA officials accosted them. They heckled Twum and tried to seize his camera, leaving him with bruises on his wrist.

The Media Foundation for West Africa condemns the attack on the journalist and the attempt to censor him by deleting his video recordings. We are confident the Northern Region executives of the GJA will take up the matter and ensure that justice is served. We also urge the police in the region to investigate the reported assault and bring the culprits to book.