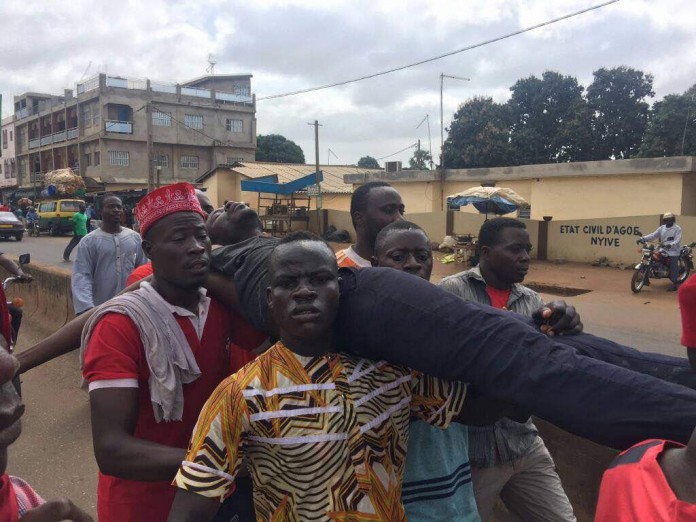 Attacks on demonstrators dominated the Freedom of Expression headlines in West Africa in the month of November 2018, with two fatalities recorded in the crackdowns, both in Guinea.

On November 7 and 8, two men, Alimou Diallo and Mamadou Bela Baldé, aged 26 and 30 respectively, lost their lives in a violent attack on opposition demonstrators by state security forces in Conakry.

On November 14, a week after the fatal crackdown, Guinea’s media regulatory body, Haute Autorité de la Communication (HAC), suspended, Radio France International’s correspondent, Mouctar Bah for “an unbalanced reportage.” His accreditation was consequently revoked with notice that any appeal against the sanctions would not be considered until the end of February, 2019.

This followed a complaint by the country’s defense minister who said Bah’s attribution of the deaths to the “red berets” (the military) was inaccurate.

Still in Guinea, the home of the director of Publication of the news website, aminata.com, Alpha Oumar Diallo, was ransacked by a mob believed to be sympathisers of the opposition Union des Forces Démocratiques de la Guinée (UFDG) party. The journalist himself, his immediate family and parents have been targeted with threats.  Oumar Diallo had published a critical audio story about, Halimatou Dalein, the wife of the main opposition leader, Cellou Dallein Diallo.

Neighbouring Guinea Bissau also saw excessive use of force by the police to break up a students’ demonstration on November 8. Several injuries and arrests reported among the student demonstrators who were demanding an end to a long-running teachers’ strike.

The crackdown on demonstrators continued as security forces in Mali violently dispersed a gathering by opposition party supporters on November 16. The crowd which was about to begin a march to denounce what it termed as poor governance and high cost of living among other political issues, was forced to flee in different directions in the face of police brutalities. Several demonstrators were injured, including Amadou Araba Doumbia, a Member of Parliament, who was admitted at the hospital.

In Ghana, journalist with Okwahu FM, Ebenezer Ofori Agyei, popularly known as Odiasempa, was arrested on November 14, 2018 and kept in police custody for a total of seven days at Kade in the Akwatia District of the Eastern Region on the orders of a police commander.

The action of Deputy Superintendent of Police (DSP) Yaw Dankwah Agyekum followed a story the journalist filed for his station which featured an audio recording of drivers in the District accusing him (the police officer) of extortion.

Back in Mali, the Managing Editor of Malimedias.com, Hamidou Touré El Hadji, was on November 29, brutalised by a gendarme who is also the Secretary-General of the country’s truth and Reconciliation Commission. Colonel Abdoulaye Makalo had been upset by the journalist’s Facebook article criticising the work of the Commission. The military officer allegedly forced Toure to drink his own urine.