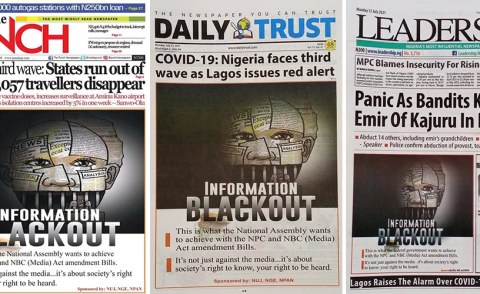 The Media Foundation for West Africa (MFWA) commends Nigeria’s media for their stoic campaign of resistance to new legislative measures that were deemed repressive of press freedom. In a major show of its power that could serve as an example to other countries, the Nigerian media have, through a robust campaign, forced the government to suspend the controversial pieces of legislation.

The Nigerian Press Council (NPC) bill seeks to empower the President to appoint the chairman of the council’s board as well as other members of the board upon the recommendation of the information minister, himself a government appointee.

The National Assembly said the bills would “remove bottlenecks affecting (media) performance and make it in tune with current realities in regulating the press.” House Speaker Femi Gbajabiamila told the media the legislation was proposed in good faith.

However, the media and press freedom advocates rejected the proposed laws as liberticidal.  They say the amendments sought to grant sweeping prosecutorial powers to the President and the Minister of Information. Among the fears of critics is the prescription of jail terms of up to three years for certain infractions as well as crippling fines.

On July 12, scores of newspapers across the country boldly printed ‘Information Blackout’ on their front pages to underline their unwavering opposition to the proposed Nigeria Press Council (NPC) and National Broadcasting Commission (NBC) Amendment Bill.

The protest banner was displayed as chyrons on television stations and lead graphics on online media while radio stations promoted the protest with jingles.

A day after the “Information Blackout protest”, lawmakers succumbed and suspended consideration of the Bills.  A national station, Channels TV featured Segun Odebunmi, the lawmaker sponsoring the bill, as he announced the suspension.

“We have been on this process for a while and right now, we have suspended it for more consultation to happen on it,” said Odebunmi, who is the Chairman House of Representatives Committee on Information National Orientation Ethics and Values.

The suspension came as the media followed up with a second day of protest, with the leading newspapers focusing their editorials on the dangers of the proposed bills.

In its advertorial protest, Vanguard Newspaper described the proposals as “satanic and “toxic” with “no redeeming features.” It said the laws would “create a monster Minister of Information with the media as his footstool.”

Punch Newspaper said it could “pave the way for the government to seize control of the media space and subjugate the free flow of information to the whims and direction of the state and its officials.”

President Muhammadu Buhari’s government has proven to be one of the most repressive freedom of expression regimes in the democratic history of Nigeria. In June, the government suspended the operations of social media giant, Twitter, over what it described as national security concerns, with a threat to prosecute broadcast stations using the microblogging platform.

The Buhari administration has an obsession with controlling social media. In 2015, it tried to introduce the Frivolous Petitions Bill which mainly targeted online whistleblowers. Nicknamed the Social Media Bill,” part of it read “Where any person through text message, tweets, WhatsApp or through any social media post any abusive statement knowing same to be false with intent to set the public against any person and/or group of persons, an institution of government or such other bodies established by law shall be guilty of an offence and upon conviction shall be liable to an imprisonment for 2 years or a fine of N2,000,000 or both such fine and imprisonment.”

Like the NPC and NBC Act Amendment Bills, the Frivolous Petitions Bill was also withdrawn following an outcry. The suspension of the two bills on July 13, 2021, is the third setback suffered by the government in the freedom of expression space in less than one month.

On June 22, 2021, the ECOWAS Court of Justice in Abuja delivered a judgement that restrained the Nigerian government from carrying out its threat to arrest, prosecute or sanction Twitter and/or any other social media service provider(s) and users in the wake of the Twitter ban.

The verdict was in respect of a two-pronged suit by SERAP that is also challenging the legal basis of the Twitter ban in the substantive case which is pending.

On July 9, the ECOWAS Court of Justice ordered the Nigerian government to pay journalist Agba Jalingo the sum of 30 million naira (USD 73,000) as compensation for subjecting him to dehumanising treatment while in detention in Cross River State. The journalist was arrested on August 22, 2019, and detained for 179 days over an anti-corruption report he had published in the CrossRiverWatch online newspaper.

The MFWA welcomes the withdrawal of the NPC and NBC Amendment Bills and urges the government to engage broadly on the Bills to ensure rights-respecting and progressive laws are passed.

We commend the Nigeria Union of Journalists (NUJ), Nigeria Guild of Editors (NGE) and the Newspaper Proprietors Association of Nigeria (NPAN) for leading the campaign against the controversial bills