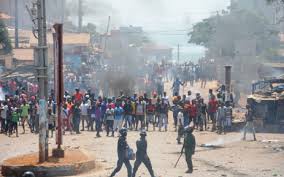 The Media Foundation for West Africa (MFWA) condemns strongly the brutal crackdown on demonstrators by security forces in Guinea leading to the killing of at least nine people, with several people reported injured amidst arrests of leading political figures and activists in the capital Conakry, beginning on October 14, 2019.

The police made extensive use of tears gas and live ammunitions against demonstrators protesting against attempts by the ruling party to modify the constitution for President Alpha Conde to run for a third term. The government insisted the protest march was illegal and unleashed the full might of the security forces on the marchers leading to the fatalities.

The MFWA’s correspondent says after the police had violently dispersed the crowd, elements of the security forces chased some of the demonstrators right into their homes and assaulted them. Gunshots echoed from the opposition-dominated northern districts of the capital with thick billows of smoke rising and eclipsing the late afternoon sun.

“In all, some nine deaths, eight of them in our capital, were recorded as well as several injuries,” admitted  Bourema Conde, Minister for Local Government.

The recent deaths bring to 11 the number of people killed since April this year when protests against the planned constitutional reforms began across the country.

On April 30, 2019, in the town of Kankan, thugs believed to be supporters of Guinea’s ruling coalition attacked a group protesting against the President’s rumoured third term bid.  One of the brutalised protesters, Mory Kourouma, succumbed to his injuries on June 19, while receiving treatment at the hospital.

On June 13, 2019, there was a bloody security crackdown alongside attacks by ruling party supporters left one person dead and 22 FNDC protesters injured in the southern town of N’Zérékoré.  Several protesters were arrested and a night- time curfew was imposed on the town.

President Conde, aged 81, is getting to the end of his second and last term in office. However, his political party and its allies in the Ruling Arc-en Ciel Coalition have been pushing for a revision of the constitution to remove term limits. The President himself has lately announced his attention to conduct a referendum on the proposed constitutional reforms.

With the opposition against the planned constitutional reforms growing, the authorities have taken a tough stand against public demonstrations. On June 16, 2019, the Guinean Parliament passed a new law allowing gendarmes “shoot on sight” when they judge it necessary, without any fear of prosecution, a law widely denounced as a recipe for bloodshed during public demonstrations.

“This law is dangerous in the sense that, even before its adoption, we recorded deaths during demonstrations. I think we have shed enough blood in Guinea, “protested Hamidou Barry, secretary general of the Guinean Human Rights Organization (OGDH), a human rights group in reaction to the passage of that law.

As part of the fight-back against the growing opposition to the proposed constitutional changes, about 20 planned anti-third term demonstrations have been prohibited and security forces have enforced the prohibition with an iron fist.

In the latest incident, the authorities arrested six members of the anti-third term coalition FNDC on October 12, 2019, while they were preparing to address a press conference to announce the October 14 protest march. The arrested leaders included Abdourahamane Sanoh, a former Minister of State and national coordinator of FNDC, Abdoulaye Oumou Sowh, the Secretary General of the Association of the Bloggers of Guinea (ABLOGUI), Sekou Koundon  and Ibrahima Diallo, respectively Administrator and the Coordinator of Balai Citoyen Citizens (Broom) and Tournons la Page (Let’s Turn the Page) both pro-democracy civil society movements.

A day later (13 October 13), seven other people, including Badara Koné, the Secretary General of the youth of the Union des Forces Republicaines (UFR), which is a member organisation of the FNDC, were also arrested in the Conakry suburb of Matam. They were detained at the Criminal Investigation Department of the Police in Kenien (Conakry).

Meanwhile, a court in the capital Conakry on October 22, sentenced five of the arrested FNDC leaders to between six months and one year in prison on charges of organising banned protests and inciting civil disobedience.  Former government minister, Abdourahmane Sanoh sentence with four others convicted to a six-month jail term each.

The Media Foundation for West Africa (MFWA) is deeply concerned about the serial violations of the right to peaceful assembly by the authorities in Guinea, a right guaranteed under Article 10 of the country’s constitution and regulated by the Public Order Law n°2015/009/AN of June 4, 2015.

The right to demonstrate is an integral part of the right to freedom expression and opinion and an indispensable element of democratic governance. The MFWA calls on the authorities in Guinea to uphold citizens right to peaceful protest as it is obliged to do under the country’s constitution and the several regional and international treaties on civil and political liberties which the country has ratified or is party to.

We reiterate our condemnation of the brutal and lethal crackdown on protestors and the detention of the political activists for exercising their democratic right to express dissent through demonstrations. We further urge the authorities to investigate the crackdown and ensure justice for the victims.