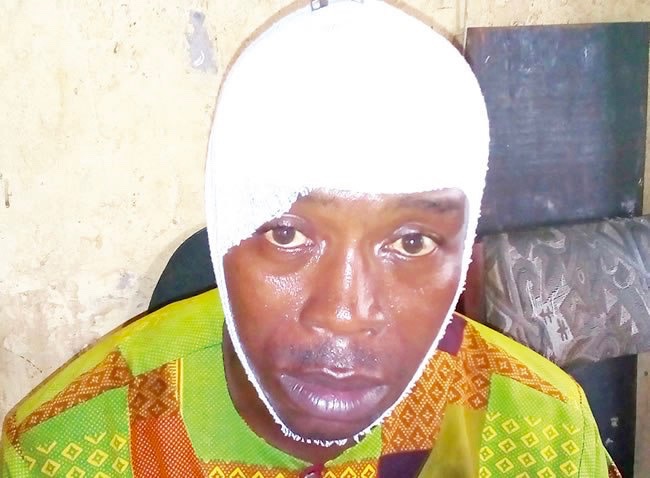 Ihiegbulem after the brutal attack

The Media Foundation for West Africa (MFWA) condemns the brutal attack on Emeka Ihiegbulem, a correspondent of the PUNCH Newspapers, and calls for an immediate investigation into the incident.

On May 22, 2018, a group of men from the army, police and other security agencies beat-up Emeka Ihiegbulem, while he was covering the 18 anniversary celebration of two Biafra separatist groups: Movement for the Actualisation of Sovereign State of Biafra (MASSOB) and the Biafra Independent Movement (BIM).

The MFWA’s correspondent in Nigeria reported that the groups’ celebrations were interrupted by security agents who appeared at the scene and ordered everyone to sit on the floor.

After joining the crowd to comply with the order, Ihiegbulem held up his identity card and recorder to identify himself as a journalist, but these were ignored by the security agents.

“They ignored me and marched me along with MASSOB members into a waiting vehicle to the state police headquarters,” Ihiegbulem narrated.

Ihiegbulem said at the police headquarters, a policeman snatched his ID card, recorder and notebook from him and physically assaulted him, including hitting his head with a club.

The journalist was later rescued after another police officer intervened on his behalf. He later received first aid at a nearby pharmacy.

Ihiegbulem’s seized recorder, ID and notebook are yet to be returned.

We call on authorities in Nigeria, particularly, the Inspector General of Police to investigate the matter and ensure that the officers who abused the journalist are sanctioned. We encourage the management of the PUNCH Newspapers to file an official complaint about the incident to ensure that justice is served.