Guinea: Soldiers assault journalist in the middle of a report 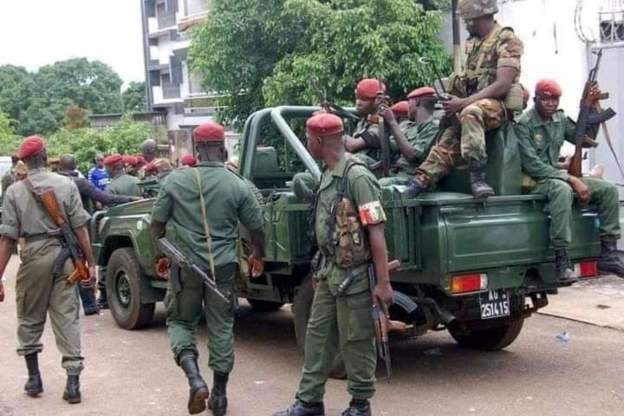 The Media Foundation for West Africa (MFWA) is appalled at the attack on journalist Mohamed M’bemba Condé and calls on the Guinean authorities to hold perpetrators of this despicable act to account.

On May 10, 2022, the Guinean security forces were conducting an operation to mark buildings that are to be recovered by the state. As part of this operation, State delegations scour the streets of the city to identify buildings and land that may belong to the State. Mohamed M’bemba Conde, journalist with Radio Espace Kania and correspondent for the online newspaper Guinée Matin, went to cover the operation when he got caught up in an altercation with a security officer.

Conde was on the ground reporting in the company of some state officials when he was told by a soldier to give way in one of the narrow streets of the town. Reportedly, one of the soldiers insulted the journalist who expressed displeasure at the verbal abuse. This was followed by a scene of atrocity during which the journalist was brutalised, dragged on the floor, and his working equipment damaged.

“Another group of soldiers told me to give way. I said brothers, take it easy where I am, I can’t give way anymore, I’m even stuck. He asked me, ‘But you don’t see the delegation, the authorities?’ I told him that I am a journalist, I am even part of the delegation and I am doing my job…another one replied, he told me to shut up, otherwise he is going to deal with me. I told the commander ‘you see, tell him not to insult me if he insults me, I will retaliate’. Meanwhile, the commander pushed me away and the other gendarmes and soldiers – there were many of them – started to hit me with their fists, and beat me up,” Mohamed M’bemba Conde told the MFWA’s Guinea correspondent.

“As a result, my telephones were damaged and the power button on my recorder no longer responds,” he explained.

The journalist is complaining of pain in the head and chest, and is currently hospitalized. He was visited by the secretary general of the regional branch of the union of media professionals of Guinea.

“The doctors did an ultrasound of my chest. They found bruises and trauma due to the blows I received,” he told us.

The union of media professionals of Guinea has expressed discontent with the incident and has voiced its support for the journalist. As the union prepares to make a statement, it has decided to boycott all activities of the Kindia authorities after the physical abuse inflicted on Mohamed M’bemba Condé.

“On the judicial level, the regional union of the private press in Guinea, which I belong to in Kindia, has filed a complaint against the agents who beat me. The case is under investigation at the regional gendarmerie of Kindia. My attackers and I will be heard and the gendarmerie will direct the case to the competent judicial authority. We will follow this matter to the end,” said Mohamed M’bemba Conde.

The Media Foundation for West Africa strongly condemns the attack on journalist Mohamed M’bemba Condé and urges authorities to conduct appropriate and transparent investigations. The Guinean authorities must act against this extremely violent act and punish the perpetrators whose behaviour undermines press freedom and the safety of journalists.