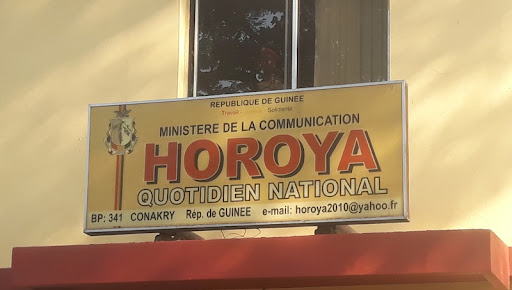 The Media Foundation for West Africa (MFWA) deplores the acts of vandalism perpetrated against the national newspaper, Horoya, and two other public media institutions and calls on the authorities to investigate, arrest and punish the perpetrators of these criminal acts.

On the evening of September 5, 2021, when the coup d’état against President Alpha Conde was carried out by a group of soldiers in Conakry, the capital of Guinea, unknown persons stormed the premises of the Ministry of Information and Communication, the National Directorate of Rural Radio of Guinea, and stole working materials from the editorial office of the national public press of Guinea.

These unknown assailants took away office furniture from the two public institutions. From there, they broke into the premises of the national daily, Horoya where they stole computers, chairs, armchairs, and tables and stripped the editorial office.

Even though the identity of the assailants is not known, some citizens in the neighbourhoods near the media headquarters say that it was idle youths from the communities who perpetrated the attacks. Others accuse the military of having done so

“The national daily Horoya was going through a crisis. And this attack on our editorial office complicates things. We are a daily newspaper, but because of economic hardship, we only publish three or four times a week. Now that this attack has robbed us if there is no reaction quickly, we are at risk of spending months without work,” Amadou Kendessa Diallo, deputy editor of the national daily Horoya, told us on Tuesday.

“Our equipment, our software, our databases, our documents, our archives – everything is gone. All the digital and physical memory of the newspaper has been taken away. If we are to resume, it will not be in less than six months. Even my asthma drugs are gone,” said Mamady Wasco Keita, the managing director of the national daily Horoya.

Keita has also confirmed that the engines of vehicles parked in the courtyard of the Horoya newspaper were also attacked by the assailants.

MaliFree Expression and The Law