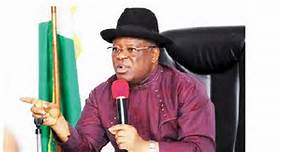 The Ebonyi Government must release journalist, Chijioke Agwu, who has been arrested for writing a story on Lassa fever, which the government claims to be false and in breach of the state’s law on infectious diseases.

The Daily Sun on April 17, 2020, published a story written by Agwu on Lassa fever outbreak in the State, based on statistics from the Nigeria Centre for Disease Control (NCDC). The authorities however say the article contained false information.

A day after the story was published, Agwu attended a press conference organised by the Ebonyi State Government where the State governor, David Umahi, ordered his guard to arrest him.

The reporter was shoved away by the governor’s guard and taken to the state’s Police Command where he is still being held. The Premium Times reported that, Governor Umahi confirmed the arrest of the journalist under newly-adopted infectious diseases law during the press conference, which was broadcast live by the public radio stations in the State.

On April 2, 2020, the governor assented to the Ebonyi State Coronavirus and other Dangerous Infectious Diseases and Related Matters Law 005 of 2020. The law, which principally deals with the restriction of movements, social gatherings, transportation or movement of essential supplies, such as food, water, pharmaceuticals also criminalized the dissemination of false information about the coronavirus and other infectious diseases.

“The law also prohibits the transmission, or dissemination through a computer system or network or otherwise false information regarding COVID-19 within the State and other Dangerous Infectious Diseases,” the governor told the media after signing the bill into law, adding that “Where a person breaches any of the above, the culprit(s) shall be prosecuted in accordance with the Law.”

This incident comes in the wake of a series of violations against journalists reporting on the COVID-19 in West Africa. The Media Foundation for West Africa (MFWA) recorded a total of 23 journalists who fell victim to arrests, physical attacks, judicial fines and imprisonment between March and mid-April 2020.

The MFWA is deeply concerned about the arrest of Chijioke Agwu and demands his immediate release. While we do not condone false publications, we think it is a dangerous practice and a serious threat to press freedom for state officials to proceed to arrest journalists as a first resort whenever they think a publication by such journalists is false.

Having said this, the MFWA urges journalists across West Africa to continue to be meticulous and professional in their reportage, especially in this critical time of the COVID-19 emergency.