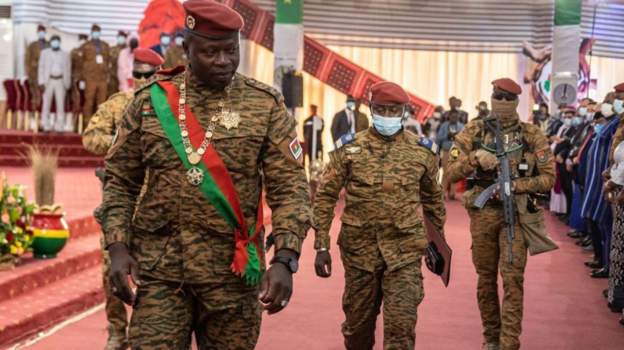 Seven professional media organisations (OPMs) have expressed concerns about increasingly repressive tendencies of the new military junta towards the media. In a statement released on April 25, 2022, the OPMs catalogued some recent actions by the authorities that threaten to muzzle press freedom, freedom of expression, the rule of law and democracy.

On January 24, 2022, the military overthrew the regime of President Roch Marc Christian Kaboré and suspended the constitution of June 11, 1991. The coup was welcomed with enthusiasm by the majority of the population.

However, in recent months, some actions by the junta. have left a foreboding feeling that freedom of expression and press freedom will be kept on a tight leash.

In a speech to the nation on April 1, 2022, President Paul-Henri Sandaogo Damiba underlined the junta’s unwavering determination to win the fight against insecurity and terrorism.” However, he also outlined certain measures that more than alarmed the media and freedom of expression activists.

These measures included the restriction of “political or associative demonstrations likely to disrupt public order or the mobilisation of the security forces.”

Reacting to this in their press release, the media organisations urged “the new authorities to work to mobilise all energies against terrorism rather than engage in the search for and stigmatisation of scapegoats.”

The release mentioned other incidents that they consider contemptuous of the media. For instance, on March 18, 2022, during a Cabinet meeting, a security guard of President Paul-Henri Sandaogo Damiba ordered reporters of the L’Observateur Paalga newspaper not to take pictures of the President. The journalists, who did not in any way defy the instruction, were further later ordered by a member of the security team to delete all their recordings in his presence and under his supervision.

On the same day, two other security guards of the military head of state stopped the journalists again to verify that there was no trace of the previously deleted photos. They insisted on searching the cameras themselves before allowing the journalists to leave.

The press release also mentioned a March 15, 2022, communiqué in which the government threatened that “there will be no impunity for authors of publications and other subversive acts that undermine public order, social cohesion and the morale of the troops.” According to the junta, false information disseminated on social networks had the potential to undermine the commitment and unity of the Defence and Security Forces in the fight against terrorism.

The last straw, according to the seven media groups, was the attitude shown to them at a recent meeting with the government. What was supposed to be a friendly meeting between media executives and the President of the Republic on April 14, 2022, soon turned into something that gave the media professionals the impression that they had been summoned for a ‘tutorial in journalism’ and some castigation for their critical reports about the government. “It doesn’t take a crystal ball to know that President Damiba doesn’t appreciate these ‘criticisms’ and wants to see it stopped,” the media organisations said.

Even so, the OPMs called on “President Damiba and his government to lift all restrictions on the work of journalists and to consolidate freedom of expression and of the press, which, far from weakening a power, facilitates mobilisation around its deepest aspirations.”

The Media Foundation for West Africa (MFWA) shares the concern of the Burkinabe press about attempts to muzzle freedom of expression in the country. We urge the government of Burkina Faso to ensure that fundamental freedoms are respected and enjoyed as part of its efforts to build a democratic and prosperous Burkina Faso.