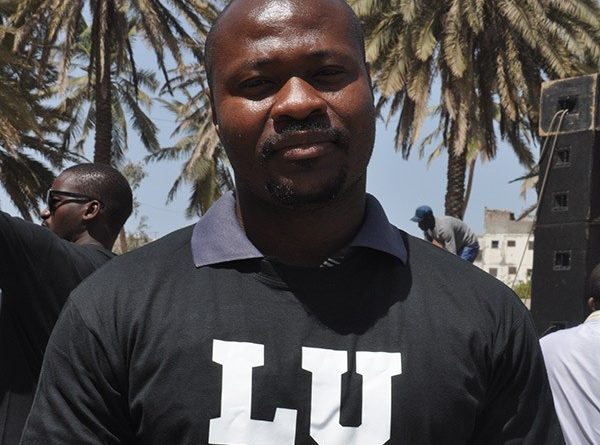 The authorities in Senegal must release civil society activist, Guy Marius Sagna, from detention and end what is turning out to be an embarrassment for the country.

Gendarmes on July 16, 2019, arrested Sagna while he was in a meeting at the office of FRAPP- France Dégage, a civil society organisation of which he is a leading member. Upon his arrest, Guy Marius Sagna was interrogated over a post he had made on Facebook on the death of the Secretary of the ruling Party in Senegal and close ally of President Macky Sall, in a France hospital.

“To die in a hospital of the former colonial master, when they have had 59 years to provide this country with hospital facilities worth their name!!!! How sad! Such a waste!” Sagna wrote

For two days, the interrogation had been about the above Facebook post. However, after failing to charge the activist under any law in connection with the post, the security officials turned to a widely circulated statement issued by the activist’s organisation, saying that it amounted to “raising false terrorist alarm.” The statement, which was made at a press conference organised by the group, said “France could use a terrorist blackmail against Senegal” to lay its hands on the country’s natural resources.

Marius Sagna insists that he did not author the said statement, attend the press conference that issued it or shared it on any platform.

After spending two nights at the gendarmerie, Sagna was put before a prosecutor at a Tribunal in Dakar where he was interrogated for nine hours and subsequently taken to the Dakar Central Police Station where he has since been detained.

“The charge of raising false alert did not come up until two days after the arrest of my client,” the detainee’s lawyer, Aly Kane, told reporters. “Guy Marius is an activist, a dynamic civil society leader who disturbs the authorities a lot, so they are looking for every means to silence him.”

Outraged by the abuse of Sagna’s rights, Cheikh Tidiane Dieye, an academic and civil society activist, on July 26, 2019, petitioned the Rapporteur of the United Nations Working Group on Arbitrary Detentions, Seong Phil-Hong.

Meanwhile, Marius Sagna’s organisation, FRAPP- France Dégage, have petitioned the Attorney General, asking him to clarify the charge leveled against its member.

“This is a clear case of persecution of a dissident that challenges the usual narrative about Senegal being a country with sterling democratic credentials and a tradition of respect for divergent opinion. The Guy Marius Sagna affair is definitely not complimentary of Senegal’s image and we expect the political authorities to intervene to end the embarrassment,” said Vivian Affoah, Programme Manager for Freedom of Expression at the MFWA.

The MFWA condemns this obscene show of force against a critical civil society activist. We call on the authorities to release Guy Marius Sagna and to end the cynical judicial proceedings against him.