On the occasion of the International Day to End Impunity for Crimes Against Journalists, the Media Foundation for West Africa and other 35 civil society organisations in West Africa have petitioned the ECOWAS through the ECOWAS Chairperson, President Ellen Johnson Sirleaf of Liberia. The petition is over The Gambia’s continued refusal to comply with judgments of the ECOWAS Court on rights violations against three journalists.

The petitioners, which include the MFWA’s national partners from all ECOWAS member states, cited three cases – Chief Ebrimah Manneh v. The Gambia (2008), Musa Saidykhan v The Gambia (2010), and Deyda Hydara Jr. and Others v. The Gambia (2014) in which the ECOWAS Court found The Gambia culpable and ordered the government to pay compensations to the victims and their families.

“We regret the fact that The Gambian government has repeatedly failed to comply with any of these binding Court judgments in violation of Article 15 of the ECOWAS Revised Treaty, as well as its specific obligation to respect journalists’ rights and safety under Article 66 of the same treaty,” said Sulemana Braimah, Executive Director of the MFWA. 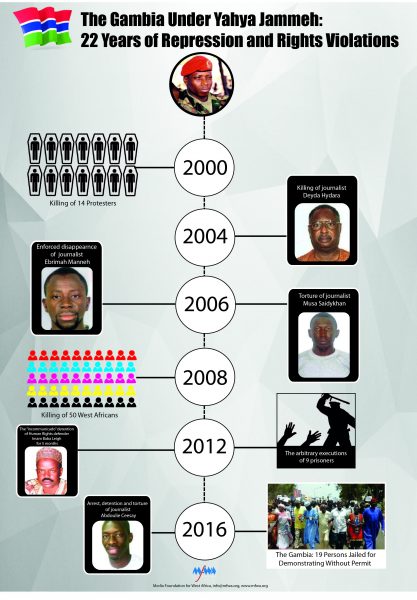 The petitioners commended the resolute and proactive manner in which the ECOWAS Court delivered the judgments in favour of the victims and to protect human rights. It however cautioned that the seeming lack of political will to enforce the judgments could undermine the authority of the Court and the credibility of ECOWAS to defend the rights of community citizens.

The petitioners bemoaned what they describe as the “gross and systematic human rights violations, including killings, enforced disappearances, tortures, arbitrary arrests and detentions” in the Gambia and the absolute impunity with which they have been perpetrated.

They therefore urged the ECOWAS to invoke the sanctions provisions of Article 77 of the ECOWAS Revised Treaty to suspend the Gambia from the organisation, just as it did to other member states such as Sierra Leone in 1997; Guinea in 2009; Niger in 2000; Togo (2009) Côte d’Ivoire (2010), Guinea-Bissau (2012), and Mali (2012) when these countries violated their Treaty obligations as ECOWAS Member States.

“As you know, progress and development cannot occur in the absence of accountability for human rights abuses. Furthermore, justice is a fundamental element in the promotion of peace, stability, and security. Socio-political and economic growth in West Africa thus necessitates a strong regional judicial mechanism to punish violators and provide remedies and reparations to victims,” the petition stated.

November is marked worldwide as the International Day to End Impunity for Crimes against Journalists to highlight the devastating impact that the lack of accountability for crimes against journalists has on society as a whole.

A copy of the Petition to the ECOWAS  is available here.