Enhancing Transparent and Accountable Governance through Access to information in Niger: Top 5 Recommendations by key stakeholders 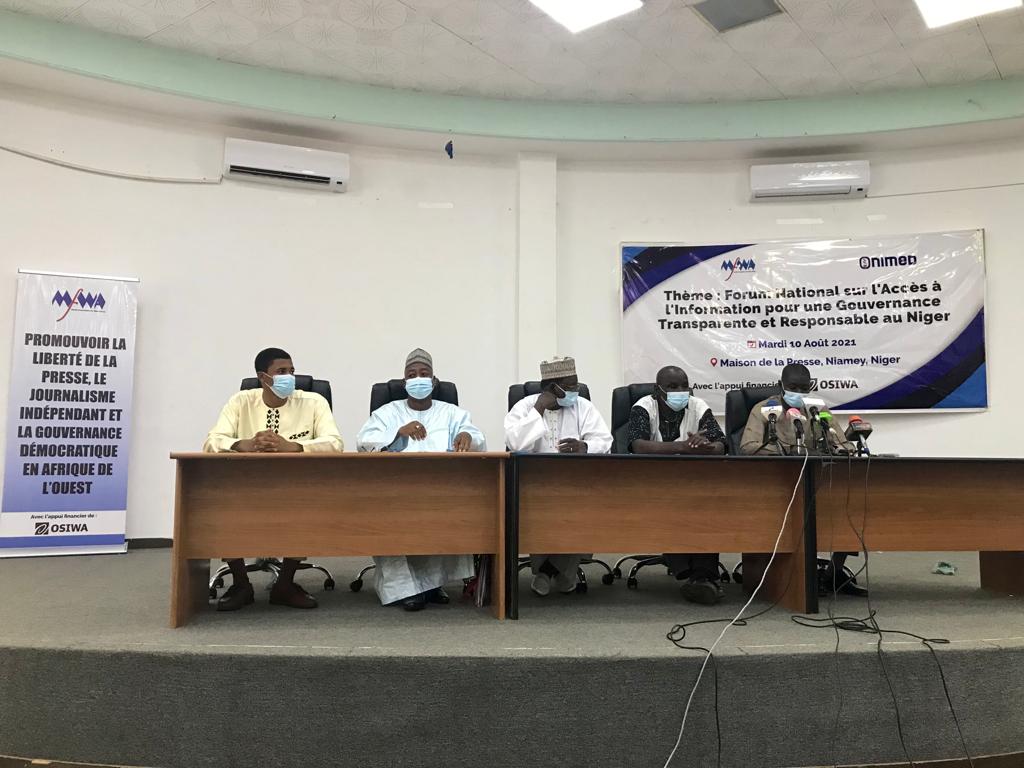 The Media Foundation for West Africa (MFWA) in collaboration with its national partner the Nigerian Independent Observatory of Media Ethics (ONIMED) on August 10, 2021 convened a public forum on the theme: The Role of Access to Information for a transparent and accountable governance in Niger.

The forum brought together journalists, lawyers, anti-corruption CSOs, journalists’ groups/associations and the office of the mediator of the Republic. Among the key officials at the forum were M. Ali Seydou, representative of the Minister of Communication and officer in Charge of relations with public institutions, Mr. Mustapha Kadi, representative of the Mediator of the republic, etc.

Reflections and deliberations focused on the current state of the implementation of the charter in Niger; the emerging challenges faced by the office of the mediator of the republic in enforcing the law, the importance of the law and how it can used to improve accountability and transparency, the way forward on what should be done to improve the implementation and use of the law. After four hours of deliberations, participants made the following five key recommendations:

The charter on access to public information has been adopted in Niger since 2011, however, a limited number of journalists and public officials in the country are aware of its existence and how to use it. Both citizen and journalists are central to the adequate implementation of the charter. When aware of the importance of the charter, citizen will be empowered to use it to request for information and in the long-term demand accountability from public officials, and transparency in public affairs.

The office of the mediator of the Republic, as the institution in charge of ensuring adequate implementation of the charter, and CSOs must therefore embark on public education campaigns and raise awareness among the public of the existence of the charter, its importance, and how it can be used to exercise their constitutional rights of access to information.

One challenge raised during the forum is that public officials as well as journalists in Niger have low capacity in the utilisation of the charter. While public officers struggle to clearly define their roles as information officers, how to process an information request, fees and charges, etc, journalists on the other hand have issues in understanding the law, how to make an information request, duration for information processing, exemptions, appeal process, etc. This situation has often resulted in journalists resorting to mere phone calls to access information and often, they oral requests via phone calls are denied. It has created over time a climate of hostility between the media and public officials.

Should both parties have a better understanding of the charter and their roles, it would help in its smooth implementation, reduce administrative opaqueness on the side of the government, generate more proactiveness in information disclosure, and allow journalists to access information to produce fact-based reports and adequately play their watchdog role. Key stakeholders present at forum urged the office of the mediator of the Republic, and media development organisations to jointly organise capacity building trainings for both information officers and journalists.

An essential aspect of access to information is the archiving system. In Niger, every public institution archive on annual basis administrative documents at the national archive office. Some of the documents archived include contracts, reports, budget reviews, budgetary allocations, etc. An information requested can be found in the national archives. A robust archiving system is considered to be a pre-requisite to access information. Keeping a well-structured records system does not only improve quality of public administration and prevent information manipulation and destruction, but also, ease the process for information request and accessibility.

However, in Niger, archived documents are in danger as the national archive office has on several occasions been flooded with several documents destroyed, and the building is currently at risk of a fire disaster. Furthermore, the Archive Council of Niger which is the body to oversee the national archiving system has not been operational. The gloomy state in which the archives in Niger are found is a contributing factor to the limited implementation of the charter on access to information as information requested cannot been found.

In view of this, the government is urged convene a meeting with the Archive Council to take updates on the state of affairs, provide resource to the national archive office to improve on the safety of its facility, speed up the digitalisation process of the archives and ensure adequate record keeping in order to safeguard the documents and facilitate access to information.

Following the adoption of the Charter on access to information, several stakeholders have raised a number of concerns. Some of them included the lack of clarity on the fees to be charged by an institution in providing information, how should sanctions be imposed on public officials that do not provide an information, etc. Based on such challenges, the office of the mediator of the republic with contributions from several stakeholders drafted a decree that is to complement the charter and ease the process of access to information. However, the decree has been drafted for some years and is awaiting adoption by the government. Stakeholders, and like-minded institutions at the forum are calling on the government to adopt the decree to iron out some misunderstandings in the interpretation and application of the law. This will contribute to the smooth implementation of the charter.

Whistle blowers in Niger have over the years suffered attacks, persecution, and intimidation. Such a context has over the years instilled fear in public servants and created a culture of secrecy. This led to the coinage and use of a popular expression in Niger “professional secret” when a public servant is unwilling and not comfortable in disclosing an information. As of 2019, Niger lacked legal instruments to protect whistle blowers and in the 2020 Governance Defence Index by Transparency International, Niger scored the lowest mark of F8 on the protection of whistle blowers. The adoption of a law to protect whistle blowers can create an environment favourable to information disclosure, engender investigations by journalists, and in the long term ensure public accountability, and transparency. Therefore, the government must adopt a law protecting whistle blowers.

The meeting also saw the launch of a manual for journalists on Access to Information and a training workshop that enhanced journalists’ skills and knowledge around the ATI law and how to use it to develop compelling stories.