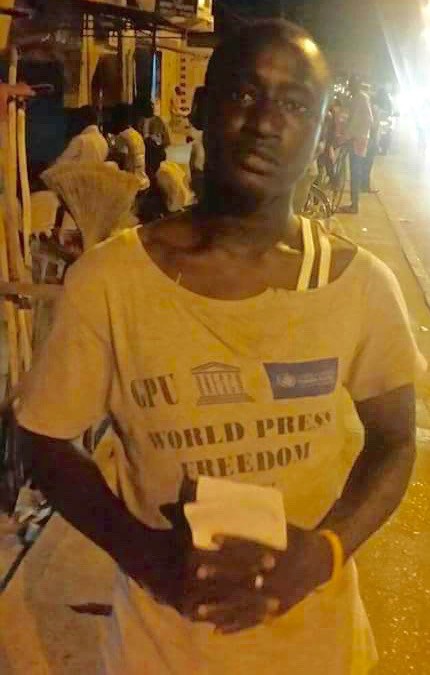 A reporter of the Forayaa newspaper, Kebba Jeffang, has been assaulted by supporters of the United Democratic Party (UDP), Gambia Moral Congress (GMC) and National Reconciliation Party (NRP) for asking a legitimate question about inter-party unity at a press conference organised by leaders the three parties in Banjul on March 4, 2017.

The UDP, GMC and NRP are three of the six parties that united in a coalition and won power to end the 22 year reign of Yahya Jammeh former president of The Gambia in the December 2016 elections.

During question time, Jeffang asked the leaders the rationale behind their decision to field separate candidates for upcoming parliamentary elections after winning the presidential election as a united block.

This harmless question was met with an angry chorus of “Go and ask Halifa Sallah” from the party supporters. Halifa is the editorial advisor of the Foroyaa newspaper and leader of the People’s Democratic Organization for Independence and Socialism (PDOIS), one of the six parties that form the ruling coalition. Sallah is reported to have had recent disagreements with the UDP, GMC and NRP parties on certain issues.

“My introduction as a reporter for Foroyaa Newspaper invited harassment and interruption from party supporters,” Jeffang later lamented in a press interview.

Jeffang said that at the end of the event, while the party leaders were still in the conference room, a young man approached him and verbally abused him. He said the act attracted some more people who surrounded him.

“They hit me and in the process tore up my shirt. I suffered internal shoulder pains afterwards,” Jeffang bemoaned.

Meanwhile, the Gambia Press Union (GPU) has condemned the attack on the journalist and called on the authorities to safeguard freedom of expression in The Gambia.

“The attack on Mr Jeffang is both regrettable and unfortunate and should not have happened. The attack perpetrated by parties who form part of the government that promised a new dawn of freedom for the press corps in the Gambia is a violation of constitutional provisions that guarantee the freedom and independence of the media, and failure to adequately address it (the attack) will be tantamount to impunity,” a statement signed by GPU Secretary General, Saikou Jammeh on March 7, 2017 said.

The MFWA joins our national partner in The Gambia, the GPU, in condemning the assault on Jeffang, especially in the presence of party leaders who did not deem it fit to intervene. This is a big blow to the hopes of Gambians and freedom of expression advocates who expect the new leaders to safeguard press freedom. We call on the leadership of the UDP, GMC and NRP to find the culprits and ensure they are punished.