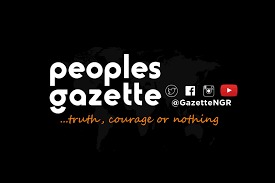 The Media Foundation for West Africa (MFWA) condemns the storming of the head offices of the Peoples Gazette newspaper and urges the Nigerian authorities to cease harassing the media house.

On January 10, 2022, four officers of the National Intelligence Agency (NIA) stormed the head office of the Peoples Gazette in Abuja in a white Toyota pick-up. They threatened the security men at the gate and forced their way into the news outlet’s offices to demand the sources of a confidential memo which was the basis of a report published by the online media.

The NIA officers requested to see the Managing Editor, Samuel Ogundipe, as well as Hillary Essien, the alleged writer of the stories published in December 2021. The three-part report had revealed that intelligence chiefs at the foreign intelligence office had written a memo to President Muhammadu Buhari to sack Rufai Abubakar as the intelligence service’s director-general on the grounds that he lacked “intellectual and physiological rigour for the position.”

The invading NIA officers had come with a rogatory letter that requested the Gazette to disclose the identities of the officers responsible for the memo.  The letter described the memo to be “full of falsehood,” and that “it is even worse that Peoples Gazette did not deem it necessary to validate the allegations in such a letter with the other party before running to press.”

The violent invasion of the premises of the People’s Gazette has been widely condemned in Nigeria. Chidi Odinkalu, a constitutional law expert and former chairman of the National Human Rights Commission, said the NIA’s action did represent a violation of the Nigerian Constitution.

“The NIA acted unlawfully,” he insisted.”

The invasion of the premises of the People’s Gazette is the second act of flagrant press freedom violation against the online news website in a year.

On January 26, 2021, the site was blocked on the four major mobile internet providers in Nigeria, namely MTN, Glo, Airtel, and 9mobile, from 7.00 pm (GMT+1) allegedly on orders of Nigerian authorities. The online news portal was blocked after it published that Bolaji Gambari, the son of the President’s Chief of Staff, was performing official roles meant for his aged father. The blocking forced the Management of media outlet to create a mirror site, GazetteNGR.com.

The MFWA strongly condemns the NIA’s attempt to intimidate and threaten the Peoples Gazette which violates section 39 of the Nigerian Constitution that guarantees press freedom. We call on the authorities to ensure an end to the acts of harassment against the People’s Gazette and to allow the newspaper to operate without any fear or threats from any actors.