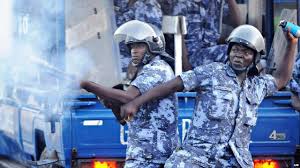 Gendarmes in the Togolese capital, Lomé, have arrested and detained the leader of a student rights group together with other members of the group while they were holding a general assembly at the university of Lome.

The student group, Ligue Togolaise des Droits des Etudiants (LTDE), was meeting on June 14, 2017 to discuss their next course of action, after they met with Nicoué Broohm , the Togolese minister for higher education, on June 13 without reaching any agreement on a range of issues affecting their studies.

The MFWA’s correspondent in Togo says the gendarmes attacked the students with batons and tear gas during their meeting, before proceeding to arrest the LTDE leader, Satchivi Foly and several other members. The correspondent says the arrested students were detained at the Lome Civil Prison. A number of students were also reported to have been injured in the melee.

Angered by the events of May 14, the university students mobilized themselves the following day to denounce the action and demand the release of their arrested colleagues. But they were in for another surprise as the gendarmes returned to beat them with truncheons to send them fleeing in different directions. The relentless security officers are reported to have pursued the students into their halls of residence to give them further beating. Several students were injured and further arrests made.

It would be recalled that gendarmes killed one person while trying to disperse a demonstration by commercial motor riders in Lome in March 2017. In the same month, they attacked student demonstrators at Dapaong in northern Togo, arrested and detained for seven days three teenage high school students.

The MFWA condemns this blatant abuse of students’ right to peaceful assembly and demonstration. We denounce the wanton attack on students as well as their arrest and detention for exercising their constitutional rights in a legitimate manner. The MFWA calls on the authorities in Togo to ensure the release of the detained students and to investigate the matter in order to sanction the gendarmes involved in this assault on freedom of assembly.